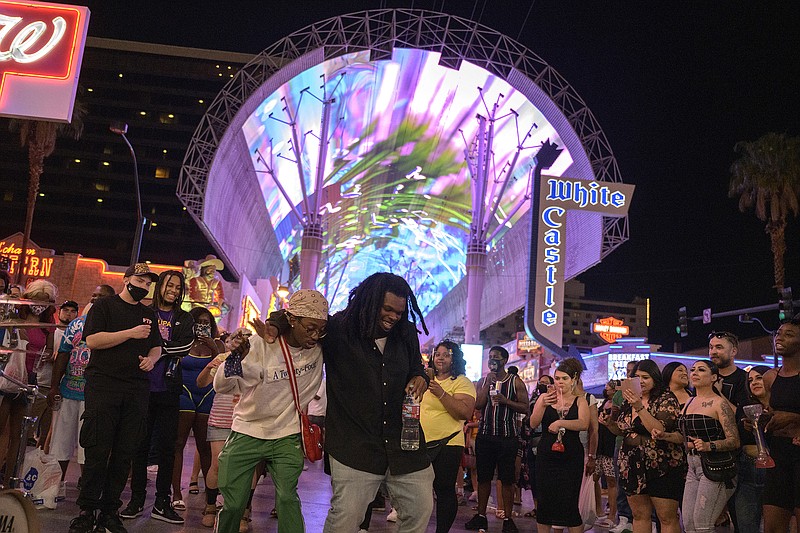 People dance along Fremont Street in downtown Las Vegas on Friday as coronavirus restrictions are further loosened. “People are feeling more comfortable traveling as science appears to be getting ahead of the covid-19 pandemic,” said Jeremy Aguero, principal analyst at Applied Analysis in Las Vegas. (The New York Times/Bridget Bennett)

LAS VEGAS -- To Mike Anger in Midland, Mich., a $100 round-trip airline flight and $260 for five nights at a Las Vegas hotel made it easy to say yes.

"How could I turn that down?" the 39-year-old electrician asked, holding a tall vodka drink, basking in 90-degree temperatures, and soaking in the sights of street entertainers and tourists on Friday in a downtown casino pedestrian mall.

"I'm having a blast," said his friend, cosmetologist Jade Topor. "Pretty much what I expected."

Las Vegas has been almost elbow-to-elbow lately with pandemic-weary tourists looking for excitement and entertainment, after casinos rose from 35% to 50% occupancy March 15 under state health guidelines.

"People were just yearning to go someplace and let loose," said Alan Feldman, a former casino executive who is now a fellow at the International Gaming Institute at the University of Nevada, Las Vegas.

Among the first arrivals were people 60 and older who were recently vaccinated, with time and disposable income, Feldman observed.

Analysts said pent-up demand, available hotel rooms and $1,400 pandemic recovery checks from the federal government have contributed to the rush.

"People are feeling more comfortable traveling as science appears to be getting ahead of the covid-19 pandemic," said Jeremy Aguero, principal analyst at Applied Analysis in Las Vegas.

Economic markers are ringing up a revival on the resort corridor that was was ghostly quiet a year ago.

The Las Vegas Convention and Visitors Authority, which just launched an ad campaign promoting freedom and a return to pre-pandemic normalcy, tallied more than 2.2 million visitors in March.

The figure was down 40% from March 2019, but a huge jump from a year earlier, when casinos closed from mid-March to early June. That drove the Nevada jobless rate above 30% -- the highest ever in any state. The state now reports the rate at 8.1%.

Every Sunday, another weekly measure of demand arrives: A nearly 20-mile line of vehicles jamming southbound Interstate 15 near the Nevada-California state line. Lanes reduce from three in Nevada to two in California.

"You have visitors coming throughout the week, all leaving at the same time," Nevada Highway Patrol Trooper Travis Smaka said. "It's very busy every Sunday."

"It's pool season, better weather," said Lori Nelson-Kraft, senior spokeswoman for the Convention and Visitors Authority. "It's still cold in the Midwest and Northeast."

Restaurants now can go to 80% occupancy, accept walk-in diners and seat tables of 12. Buffets can allow self-service supervised by employees.

Casino day clubs and nightclubs can open, but designated dancing areas remain closed until a community vaccination rate is met.

Clark County plans to allow 100% casino and business occupancy once 60% of its 1.8 million eligible residents get a first vaccine dose.

As of Friday, 45% of people 16 and older in the county had received at least one shot, according to the state Department of Health and Human Services, and almost 33% were fully vaccinated.

"The comeback is here, now," he declared.

The Democratic governor has set a June 1 target for lifting restrictions statewide, though a mask mandate will remain in place indefinitely.

That will let the convention authority host its biggest event since March 2020 -- the World of Concrete trade show beginning June 8 -- and debut its nearly $1 billion Las Vegas Convention Center expansion.

It will also showcase a new $52.5 million underground Tesla vehicle people-mover system drilled beneath the convention center by Elon Musk.

At least 50 resident Las Vegas shows have resumed, including mainstays such as David Copperfield, Fantasy revue, Carrot Top, Penn & Teller and the Laugh Factory. But not all acts at all venues are going forward.

Events drawing more than 20,000 people can reopen after case-by-case reviews of safety plans by the Southern Nevada Health District.

The Electric Daisy Carnival disappointed ticket-buyers when it postponed from May to October its multiday event at the Las Vegas Motor Speedway.

But a July 10 MMA fight featuring Conor McGregor and Dustin Poirier quickly sold out more than 20,000 seats at T-Mobile Arena. The venue has been hosting NHL Vegas Golden Knights games with limited audiences.

Newly announced big names include Bruno Mars on July 3 at the Park MGM and Usher scheduled in August at the Colosseum at Caesars Palace.

Cirque du Soleil resumes the first of its big acrobatic productions, "Mystere," on June 28, and its aquatic-themed "O" at Bellagio on July 1.

Still, gambling is what draws many Las Vegas fans. And lately, slot machine jackpots have taken on a bell-clanging rate.

A tourist from Alaska won $2.1 million last weekend; a visitor from New Mexico won a $10.5 million Megabucks payout Tuesday; a man won $2.9 million Wednesday on a Wheel of Fortune machine; and someone won $1.2 million Friday at a downtown casino. 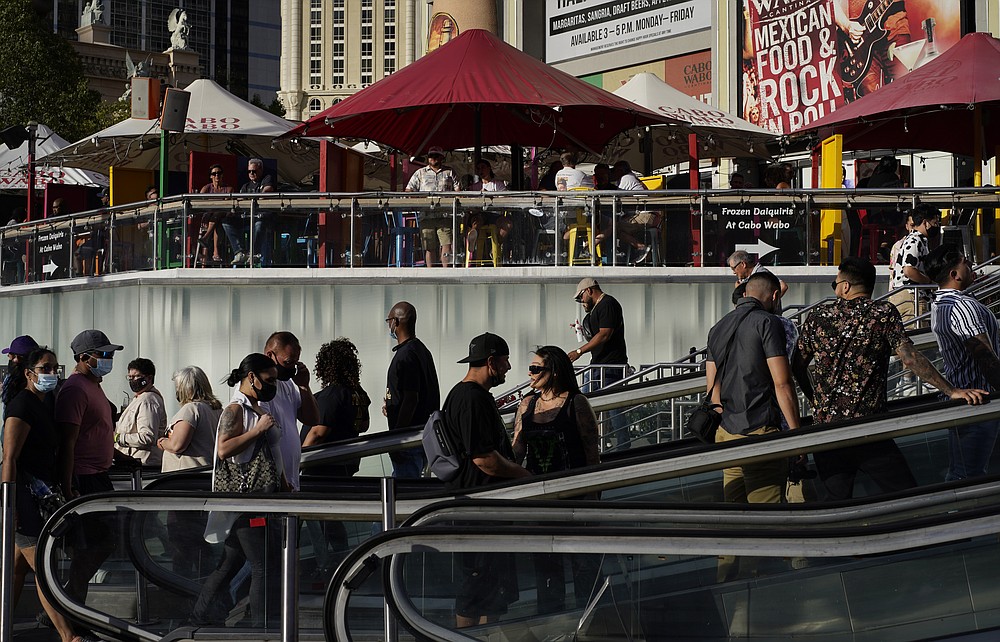 People walk as others dine on the Las Vegas Strip, Saturday, April 24, 2021, in Las Vegas. Las Vegas is bouncing back to pre-coronavirus pandemic levels, with increases in airport passengers and tourism. (AP Photo/John Locher) 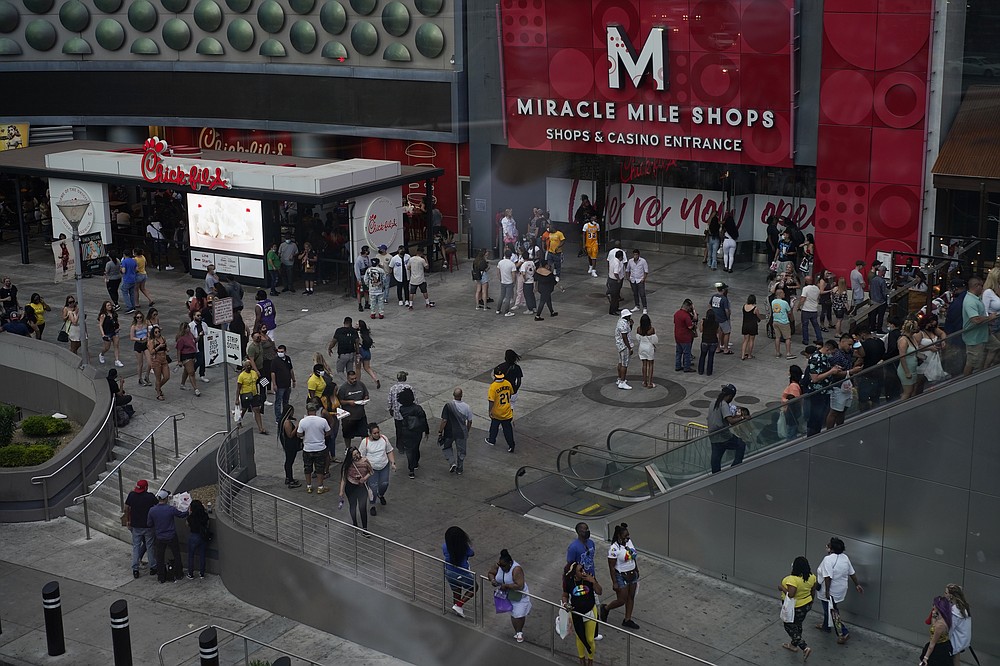 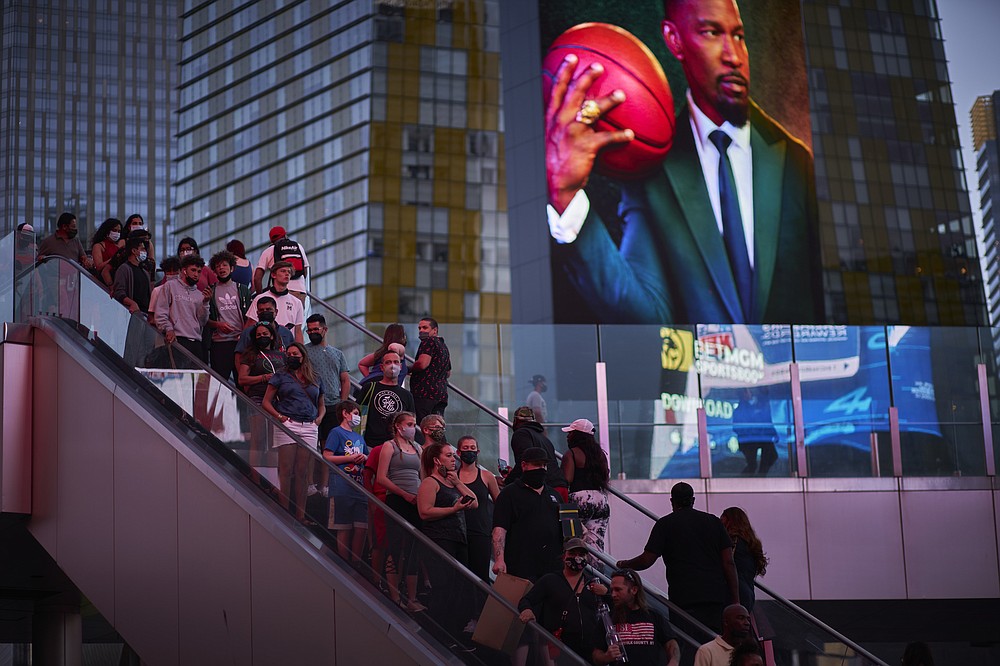 People ride an escalator along the Las Vegas Strip, Saturday, April 24, 2021, in Las Vegas. Las Vegas is bouncing back to pre-coronavirus pandemic levels, with increases in airport passengers and tourism. (AP Photo/John Locher) 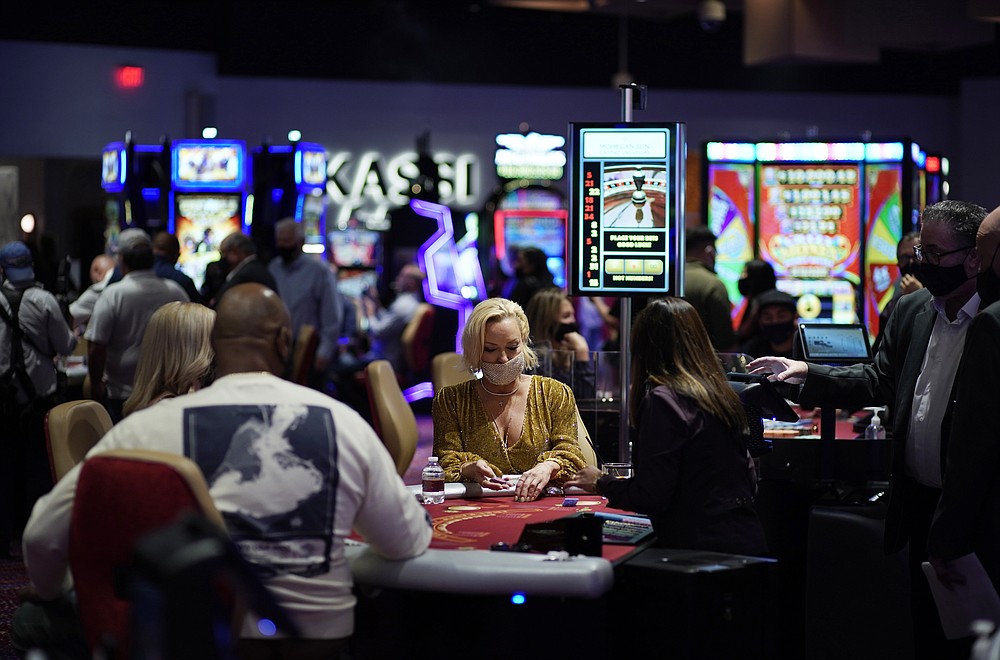 In this March 25, 2021, file photo, people gamble while wearing masks as a precaution against the coronavirus at the opening night of the Virgin Hotels Las Vegas in Las Vegas. On Saturday, May 1, casino capacity limits in Las Vegas increase to 80% and person-to-person distancing drops from 6 feet (1.8 meters) to 3 feet (0.9 meters). (AP Photo/John Locher, File)
ADVERTISEMENT