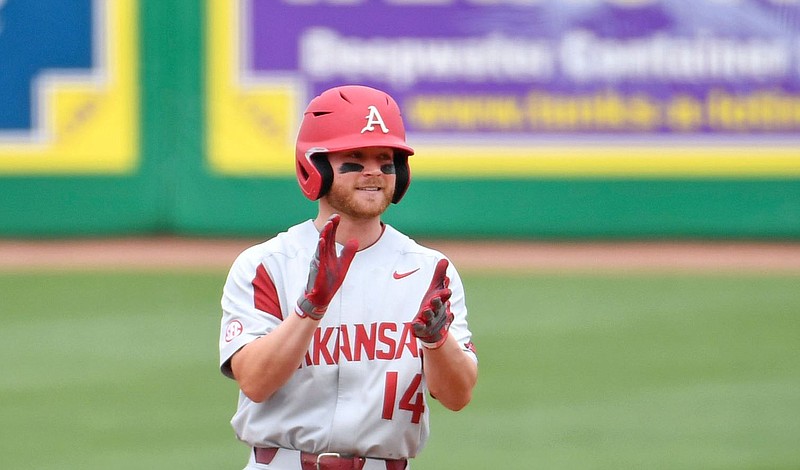 Arkansas senior Cullen Smith reacts after hitting an RBI double in the first inning of the Razorbacks’ victory over LSU in the fi rst game of a doubleheader Saturday in Baton Rouge. Arkansas clinched its seventh consecutive SEC series victory this season. (The Advocate/Hilary Scheinuk)

The University of Arkansas won a baseball game at LSU by a football score.

The No. 1 Razorbacks clinched their first series victory at LSU in 17 years by beating the Tigers 17-10 Saturday at Alex Box Stadium in Baton Rouge in the opener of a doubleheader.

LSU hung on to win the nightcap 5-4 after the Razorbacks scored three runs in the ninth inning and had the tying run on base.

“For the most part it was a real good weekend winning two out of three on the road down here,” Arkansas Coach Dave Van Horn said. “Just disappointed that we didn’t have a chance to see that last inning through.”

In the opener, Arkansas scored its most ever runs against LSU. The Razorbacks’ previous high in the all-time series was a 16-1 victory in 1997 in Fayetteville.

[Video not showing up above? Click here to watch » https://www.youtube.com/watch?v=keXCJ8ufMlE]

All nine of Arkansas’ starters got at least one hit and drove in at least one run, led by center fielder Christian Franklin (3 for 4, 2 walks, 4 RBI), second baseman Robert Moore (3 for 6, 4 RBI), right fielder Cayden Wallace (3 for 5), designated hitter Matt Goodheart (2 for 5, 2 RBI) and third baseman Cullen Smith (2 for 5, 2 RBI).

The Razorbacks’ only previous series victory at LSU came in 2004 when they swept three games.

“I think when [Labas] made a mistake, we hit it,” Van Horn said. “We didn’t foul a lot of pitches off. We hit the ball on the nose and used the whole field. We didn’t let him up. We just kept punching runs in.”

Connor Noland, who had been sidelined by arm soreness, pitched for the Razorbacks for the first time since March 5, when he came into the game in the seventh inning with Arkansas ahead 16-3.

Zack Arnold — the first batter Noland faced — hit a home run. Noland got just 2 outs and gave up 6 hits and 6 runs before Caleb Bolden replaced him as the Tigers pulled within 16-9.

In the third inning, the Tigers scored a run to cut Arkansas’ lead to 5-2, but they could have gotten closer if not for a spectacular double play pulled off by Moore.

Moore made a running, over-the-shoulder catch of a fly ball by Gavin Dugas in shallow center field, then turned and threw a strike to Slavens at first base to double off Dylan Crews — who had taken off for second base assuming the ball would fall for a hit — and end the inning.

“That little blooper was about to drop and make it [5-3] with one out,” Van Horn said. “Next thing you know we’re in the dugout. It changed the momentum there because they were about to get back in that ballgame.”

The Razorbacks scored seven runs in the fifth inning — including a two-run home run by Moore — to take a 12-2 lead.

Arkansas starter Peyton Pallette struggled with his control and despite the Razorbacks’ 10-run lead going into the bottom of the fifth inning, Van Horn took him out when he walked leadoff man Brody Drost on four pitches.

Ryan Costeiu (6-1) came in for Pallette and retired the next three batters.

In the nightcap Arkansas went into the ninth inning trailing 5-1, but loaded the bases with no outs against Tigers closer Devin Fontenot.

Wallace singled, Slavens walked and Franklin singled. Moore came up as the tying run and hit a sacrifice fly to score Wallace.

Fontenot got Casey Opitz on a line out to the third baseman. Jalen Battles followed with a two-run single to make it 5-4, then Fontenot struck out Zack Gregory looking on a 1-2 pitch to end the game.

“After we made the out in the bottom of the eighth inning, I was thinking, ‘Wouldn’t it be nice if Devin made it easy for us in the ninth inning?’ ” LSU Coach Paul Mainieri said. “It didn’t work out the way I was hoping.

“But the idea is to get the third out before the tying run or the winning run crosses home plate. Sometimes it’s not pretty. It was a big relief to get that final pitch in there and to get the win.”

The Razorbacks have won 10 games this season when trailing by three or more runs.

“I think we’re always confident we can rally,” Van Horn said. “I thought Wallace had a great first at-bat. He fell behind quick. Fouled off a couple pitches, took a ball. Fouled off a pitch, took a ball. Hit a 96 mile per hour fastball back through the middle.

“You’re kind of thinking, ‘Wow that was a great at bat. Fontenot has a really good arm, but we’ve got some really good hitters coming up.’

“All the sudden you’ve got bases loaded, no outs, and we’re one swing away from tying this thing. Opitz hits an absolute missile right at the guy. If it’s five foot higher it goes to the wall.

“It’s the way the game works.”

LSU took a 3-0 lead in the first inning when Cade Doughty hit a three-run home run against Lael Lockhart, who got just one out before he was replaced by Zebulon Vermillion.

The Tigers added runs in the second and third innings to go ahead 5-0.

Arkansas scored a run in the fourth inning on Slavens’ triple and a sacrifice fly by Franklin.

Kevin Kopps pitched the final three innings for the Razorbacks and held LSU scoreless. He allowed 1 hit, 1 walk and had 4 strikeouts. Caden Monke threw 2 2/3 scoreless innings of relief for Arkansas.

“I thought Monke and Kopps were outstanding,” Van Horn said. “Vermillion did OK. It just got away from us a little bit early.”

NO. 1 ARKANSAS VS. GEORGIA

SHORT HOPS Arkansas’ 17-10 victory over LSU in Saturday’s opener of a doubleheader were the most runs the Razorbacks ever have scored against the Tigers. Arkansas’ previous high in the all-time series was a 16-1 victory in 1997 in Fayetteville. … The Razorbacks, who beat the Tigers 7-0 on Friday night, won only their second series at LSU since joining the SEC in 1992. Their only previous series victory at LSU was in 2004 when Arkansas swept three games. … Arkansas has won all seven of its SEC series this season. 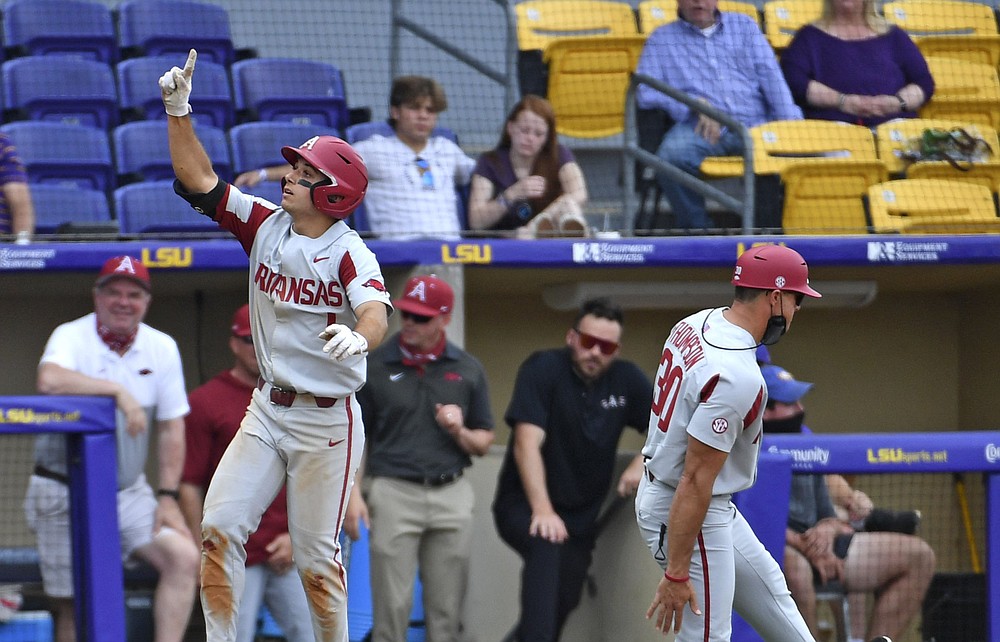 Arkansas second baseman Robert Moore celebrates after hitting his 11th home run of the season Saturday against LSU at Alex Box Stadium in Baton Rouge. Moore’s home run came in a seven-run fifth inning that helped the Razorbacks defeat the Tigers 17-10 in the first game of a doubleheader. (The Advocate/Hillary Scheinuk)
ADVERTISEMENT