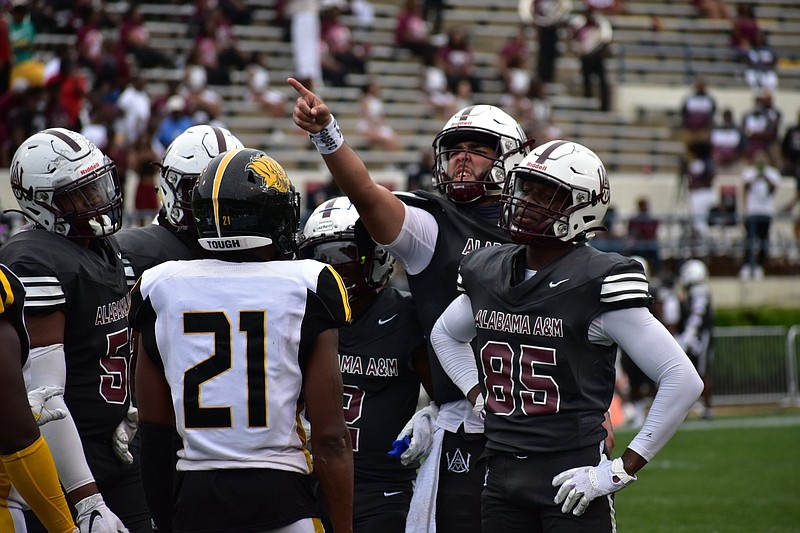 JACKSON, Miss. – Big plays from the Southwestern Athletic Conference's player of the year put an end to a dream season for the University of Arkansas at Pine Bluff.

Alabama A&M quarterback Aqeel Glass threw three touchdown passes, including two during a second-half comeback, as the Bulldogs overcame an eight-point halftime deficit to beat the Golden Lions 40-33 and win the SWAC title on Saturday at Mississippi Veterans Memorial Stadium.

The Bulldogs trailed 26-18 at halftime but scored touchdowns on three of their first four possessions in the second half. UAPB (4-1) had four punts during that same span to hinder any momentum it had generated from an impressive first half.

"I was really satisfied with the way the defense played in the first half," Alabama A&M Coach Connell Maynor said. "We just had to calm the offense down and have Aqeel make a couple of more throws. I think he got hit like twice the whole first half.

"I told him to just settle down and make the throws he'd been making all year. And that's what we did in the second half. Aqeel came out and got us going, and the defense continued to play solid. Fortunately for us, we were able to come out with a W."

Wide receiver Zabrian Moore caught 5 passes for 111 yards and a pair of scores for Alabama A&M, which also beat the Golden Lions in the 2006 final. Running back Gary Quarles also had a pair of 3-yard touchdown runs, the final coming with 1:24 left in the third quarter to put the Bulldogs ahead for good.

But the Golden Lions made Alabama A&M work for it late in the fourth. UAPB got the ball back with 34 seconds left after forcing the Bulldogs to punt. The Golden Lions moved to Alabama A&M's 22, but safety Trenton McGhee picked off UAPB quarterback Skyler Perry at the 1 with six seconds remaining to close it out.

Perry finished 23-of-36 passing for 231 yards and 1 touchdown and 3 interceptions for the Golden Lions, who were playing in the title game for the first time since 2012. Self-inflicted mistakes, however, doomed UAPB.

Alabama A&M hurt UAPB quickly at the outset. Moore turned a short pass on a slant route into a 54-yard gain on the game's first offensive snap. The Bulldogs would later net a first down at UAPB's 11 but had to settle for a 29-yard field goal from Spencer Corey after three consecutive incompletions from Glass.

The Golden Lions countered by doing something they hadn't done all season – scoring a touchdown on their opening drive. After Josh Wilkes returned the ensuing kickoff 35 yards to the Bulldogs' 46, UAPB scored on a 4-yard run from running back Mattias Clark to cap a seven-play march and take a 7-3 lead.

The Bulldogs briefly regained the advantage on the next series when from Glass connected with Moore for a 30-yard touchdown with 7:38 to go in the quarter. Tyrin Ralph then returned the following kick 81 yards for a touchdown for the Golden Lions.

For as much as special teams boosted UAPB in that first period, a miscue by that unit in the second quarter indirectly led to a Bulldogs' score. Alabama A&M was unable to move the ball after linebacker Quantravis Kelly picked off Perry near midfield and faced a fourth and 34 following a personal foul penalty but got a reprieve once DeJuan Miller was called for roughing the punter. The Bulldogs then drove 43 yards in nine plays and moved back ahead on Quarles' first touchdown. Alabama A&M had its point after blocked and was left with a 16-14 lead.

Miller would redeem himself with 7:04 to go in the half when he hauled in a 5-yard scoring toss from backup quarterback Taylor Holston, who came in for Perry after he had his helmet ripped off. The Bulldogs then swatted the Golden Lions' extra-point attempt, and Ja'Maria Green returned it for two points.

UAPB would get its second defensive score of the year at the 5:17 mark of the quarter. Linebacker Kolby Watts picked up a Glass fumble and ran 33 yards for a touchdown to put his team up 26-18. The Golden Lions had a chance to put even more points on the board just before halftime until the Bulldogs recovered a Ralph fumble inside their 15. UAPB managed to get the ball back on an interception from defensive back Jalon Thigpen with just under 40 seconds left but didn't generate anything off it.

Despite his team's lead at the break, Gamble felt his team missed out on chances to add to their cushion, especially after limiting the Bulldogs' offensive production.

"We knew that we had to contain the quarterback and not let those wideouts get going," Gamble explained. "That was the big key for us in the first half. We had some opportunities where I think we could've distance ourselves, but then we had a special teams' breakdown. Those things hurt."

The Bulldogs scored the first two times they had the ball in the third quarter. Glass found tight end Anthony Howard for a 7-yard touchdown one possession prior to Quarles' second score. Moore's 13-yard score with 7:16 left in the game gave Alabama A&M it's 14-point lead before an 11-yard touchdown from Wilkes at the 2:30 mark started the Golden Lions' last-ditch push. 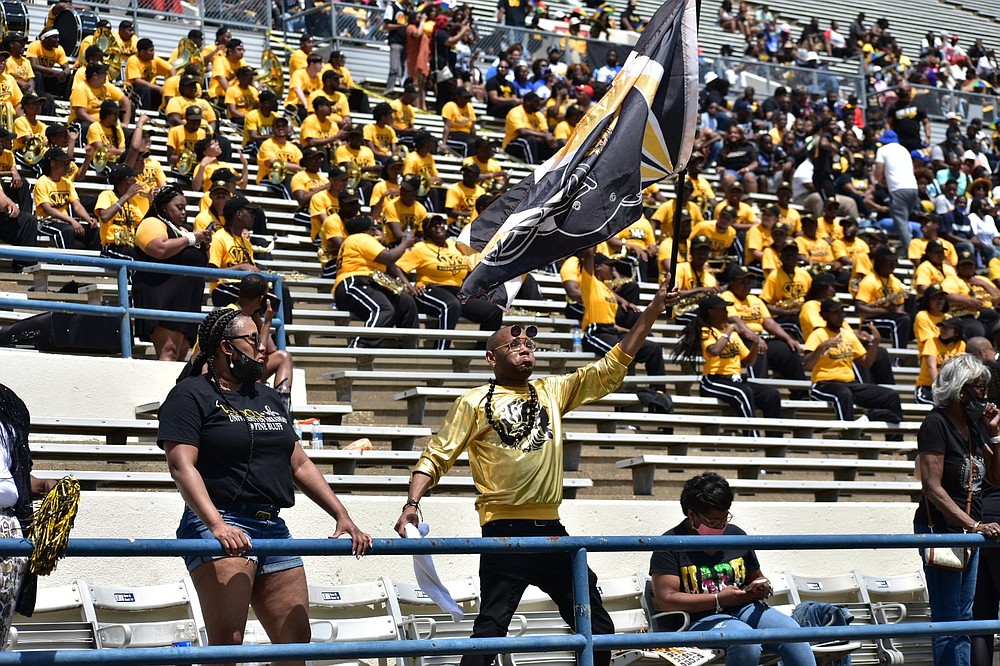 A UAPB fan waves a flag as he dances during Saturday’s Southwestern Athletic Conference Championship Game at Mississippi Veterans Memorial Stadium in Jackson, Miss. An announced crowd of 17,248 attended the game, which was the culmination of a spring season brought on by the coronavirus pandemic that canceled the 2020 slate. (Pine Bluff Commercial/I.C. Murrell) 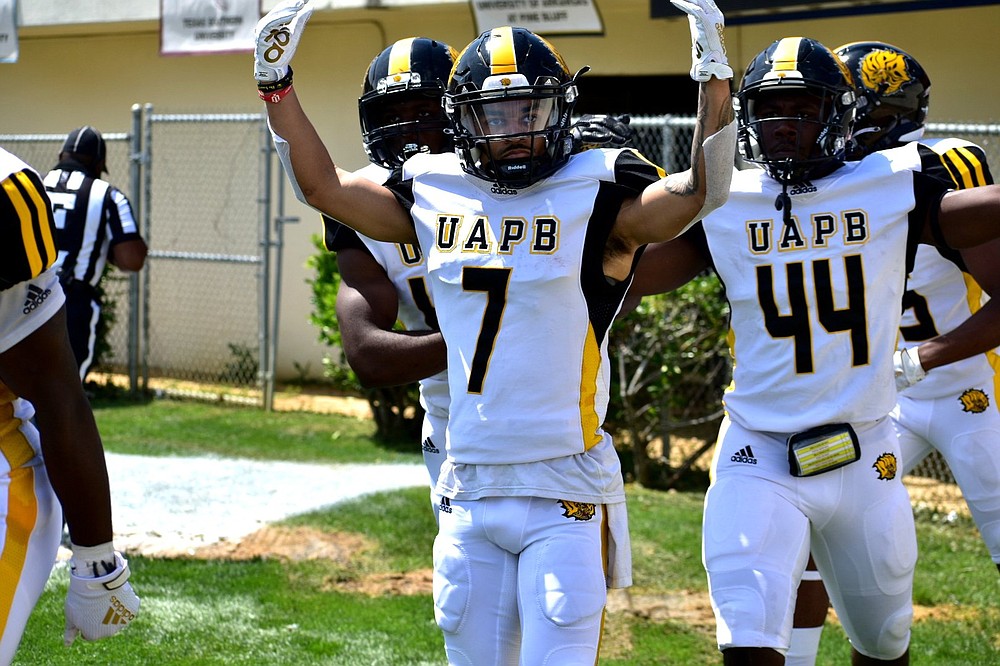 UAPB return specialist Tyrin Ralph celebrates his 81-yard kickoff return for a touchdown in the first half Saturday against Alabama A&M in the Southwestern Athletic Conference Championship Game. The Golden Lions led 26-18 at halftime, but lost 40-33 in their first conference title game since 2012. (Pine Bluff Commercial/I.C. Murrell)
ADVERTISEMENT