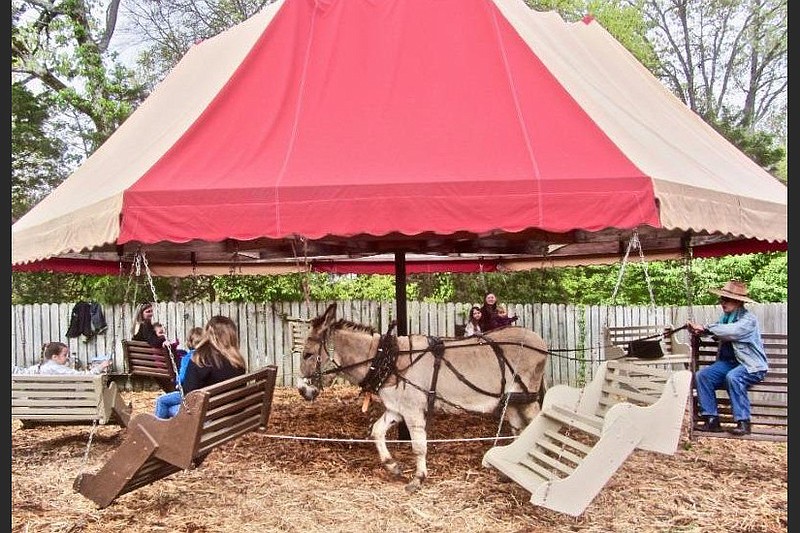 Whiskey is making the rounds at Ozark Folk Center State Park’s freshly reopened Craft Village in Mountain View. The docile donkey with the 100-proof name is circling slowly to give a ride to a half-dozen delighted children and a couple of moms aboard an old-time conveyance called a Picnic Swing.

There’s a good-old-days texture to much of the two-level Craft Village, which opened April 16 for a full 2021 season after shortened operations in 2020 due to the pandemic. The Picnic Swing is a forerunner of today’s motorized merry-go-rounds. Youngsters get a kick (figuratively) out of Whiskey’s live presence, guided by owner Tina Marie Wilcox, also the park’s head herbalist.

The ride is on the Craft Village’s upper level, next to the Old Time Print Shop. The shop is one of 20 structures occupied by artisans happy to show visitors practical skills generally dating back to pioneer days. Their work is for sale in most cases.

Manning the print shop is Troy Odom, happy to explain his bygone equipment. The linotype machine and other antiquated gear date back as far as two centuries. Seeing the obsolete display might lead to musing that today’s state-of-the-art digital devices could be musty museum pieces by the 22nd century.

Blacksmith Sam Hibbs gives visitors to his forge a fiery look at skills from the 19th-century’s horse-and-buggy era, shaping metal into an assortment of objects. Judi Munn turns her potter’s wheel in a space she shares with partner John Perry.

Nancy Snyder is working on a quilt pattern with a blue background and white floral details. Joe Roe, listed on his card with the unfamiliar term “bowyer,” explains that his archery equipment is made naturally of wood and other nonmetallic materials.

“While artisan and handmade crafts are making a popular resurgence, it is not often that you actually get to see these crafts being created,” says John Morrow, the state park’s superintendent. “Talking to the artisans, seeing their crafts taking form and exploring their studios make for a deeper connection to that unique handmade item you can take home.”

Another pleasure of the Craft Village is the ample presence of trees, shrubs, flowers, herbs and other vegetation. A plaque honors the late Billy Joe Tatum, founding herbalist of the center. Her plantings since the 1970s, according to the inscription, “are always reminding us that sometimes the best medicine is growing in our own backyard.”

Heading toward its golden anniversary in 2023, Ozark Folk Center is an Arkansas treasure. When it opened in 1973, “the park was hailed as a home for traditional crafts and music, and has since become one of the important institutions preserving this particular way of life,” according to the Encyclopedia of Arkansas History and Culture.

The advent of Mountain View’s Arkansas Folk Festival in 1963 led to the building of the folk center on 80 hilly acres at the north edge of Mountain View, which styles itself “The Folk Music Capital of the World.” The festival enjoyed a lively revival earlier this month, having gone dark in 2020 during the initial surge of covid-19.

The folk center’s website waxes lyrical about music occupying “very special places in the hearts of Ozark Mountain folk. The songs of the South and the folk-dance tunes of the region provide a looking glass offering a treasured glimpse of the history of American folk music in Arkansas.

“The fiddle and banjo were favorite sources of entertainment for pioneer settlers, and these two popular American folk instruments still sing out among the sounds one hears today. Guitars, mandolins, dulcimers, autoharps and other acoustic instruments join to create the old-time music that is still enjoyed to this very day in Mountain View.”

As part of its move toward normal operations, the folk center has scheduled two festivals. “Bluegrass & Fried Chicken” is set for Aug. 6-7, with music in the Ozark Highlands Theater and chicken in The Skillet restaurant. Oct. 15-16 will bring “Stringband Music Weekend.”

WHEN — The Craft Village is open 10 a.m.-5 p.m. Tuesday-Saturday through the fall WHERE — 1032 Park Ave., north of downtown Mountain

and younger. A family pass admitting two adults and