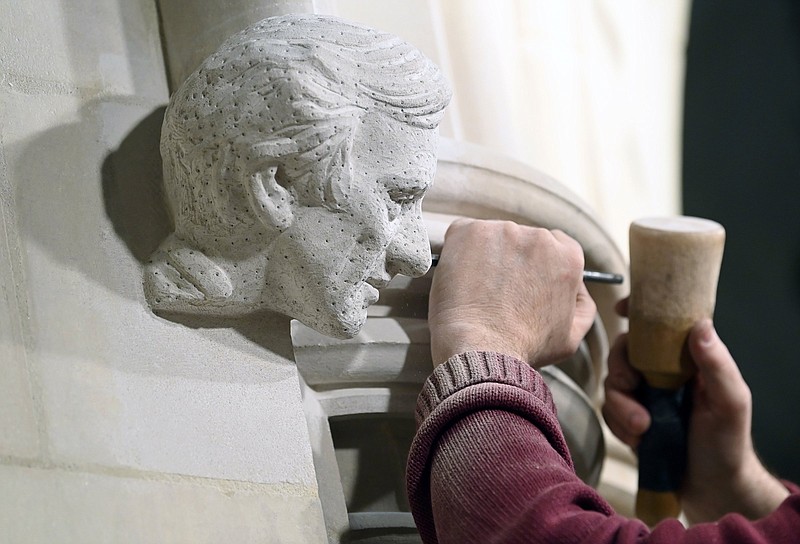 Washington National Cathedral stonemason Sean Callahan works on a sculpture of Holocaust survivor and Nobel Peace Prize-winning author Elie Wiesel on a scaffold in the Human Rights Porch at the cathedral in Washington in April. The carving completes a quartet of heads of prominent figures sprouting from the four corners of an alcove known as the Human Rights Porch, joining Mother Teresa, Rosa Parks and Jonathan Myrick Daniels, a young Episcopal theologian and civil rights crusader who was shot to death in Alabama in 1965, giving his life to protect a 17-year-old Black woman. (AP/Carolyn Kaster)

WASHINGTON -- The designers of the massive Washington National Cathedral, as close as the United States might have to a national house of worship, left its limestone uncarved in multiple key spots, openings for cathedral leaders as time goes on to consider which people and ideas most need spiritual honoring. This fall cathedral leaders, citing a rise in antisemitism and the need for dialogue, will unveil the building's first modern Jewish icon: Elie Wiesel.

The sculpture of the late Holocaust survivor, whose writings famously turned suffering and existential angst into human rights activism, was completed on April 8, Holocaust Remembrance Day. The likeness of the Romanian-born author and teacher is in a front vestibule called the Human Rights Porch, alongside those of Rosa Parks, Mother Teresa and Jonathan Daniels, among others.

"The cathedral is a 20th-century cathedral, with lots of room left on purpose so we can keep lifting up those who we think live into the highest ideals of what we think it means to be a Christian, or a person of great morality and ethics," said the Very Rev. Randy Hollerith, the cathedral's dean and, therefore, its chief iconographer. "We think he is an example to the whole country of resilience someone who dedicated his life to the highest aspirations of what it means to be a human."

The decision was made by Hollerith and other Cathedral leaders around 2019, said its spokesman, Kevin Eckstrom. The church is part of the Protestant denomination the Episcopal Church but "aims to be a house of prayer for all people where all can see something of themselves," he said. Once the denomination of much of the country's political elite, the Episcopal Church has hosted at the cathedral presidential funerals and inaugural prayer services, among other national spiritual events.

The Human Rights Porch engravings, along with hundreds of other carvings and stained-glass and other art through the English Gothic-style building, are part of the cathedral's effort to be a multifaith, ecumenical institution.

Wiesel is the first modern Jew -- the many biblical Jewish figures aside -- memorialized in the building.

"We wanted to be thoughtful that we not do anything inappropriate or offensive, or even come close to appropriation. We didn't want to pretend he wasn't Jewish because he was. It was what made him who he was. But look at what he stood for; it crosses all religious traditions," Eckstrom said of Wiesel. "That no one can be indifferent to suffering, to threats of violence, of genocide, that there is a universal human mandate to always be on guard against indifference to the suffering of others."

The bust, which sits about 10 feet in the air, in an arch doorway, will be dedicated this fall as part of a program with the U.S. Holocaust Memorial Museum and the Elie Wiesel Foundation for Humanity. The program will honor his legacy, organizers said.

"Elie Wiesel has rightly been described as a messenger to humankind. He was a man deeply rooted in Judaism, but whose message of universal human dignity was intended for people of all backgrounds," said Sara J. Bloomfield, the Holocaust Museum's director.

Wiesel's son, Elisha, said he sees the cathedral as "an American institution" and his father as a beautiful, humble American story. He noted that his father, in the 1950s a stateless journalist whose parents and little sister had been murdered in the Holocaust, became a U.S. citizen by accident when he wound up in a New York hospital and mistakenly overstayed his visa.

"He was very gentle, and because of his experience, [he was] scared of officials. A customs official just suggested: 'You could become a citizen.' It was the first time he'd been asked. I love that story," Elisha told The Post.

His father, he said, pursued rights and peace by being gentle, always being curious about other people and never turning away people who needed help.

"That's a very important part of my father's legacy. There is a lot today that calls for my father's memory and approach," he said, noting that he often sees people on social media or at social justice marches quoting Elie Wiesel. "My father is quoted as saying silence is the enemy. But I feel we've gone past indifference into screaming at one another."

Cathedral stonemason Sean Callahan used medieval techniques to create the carving. He also did the depictions of Mother Teresa, Parks, Daniels and other sculptures throughout the cathedral. The original model was sculpted by North Carolina artist Chas Fagan, whose other works include the official White House portrait of former first lady Barbara Bush and statues of Ronald Reagan and Billy Graham at the U.S. Capitol.

Wiesel wrote more than 50 books, was a professor at Boston University and the founding chairman of the Holocaust Museum, and won numerous awards, including the Nobel Peace Prize. He died in 2016 at age 87. 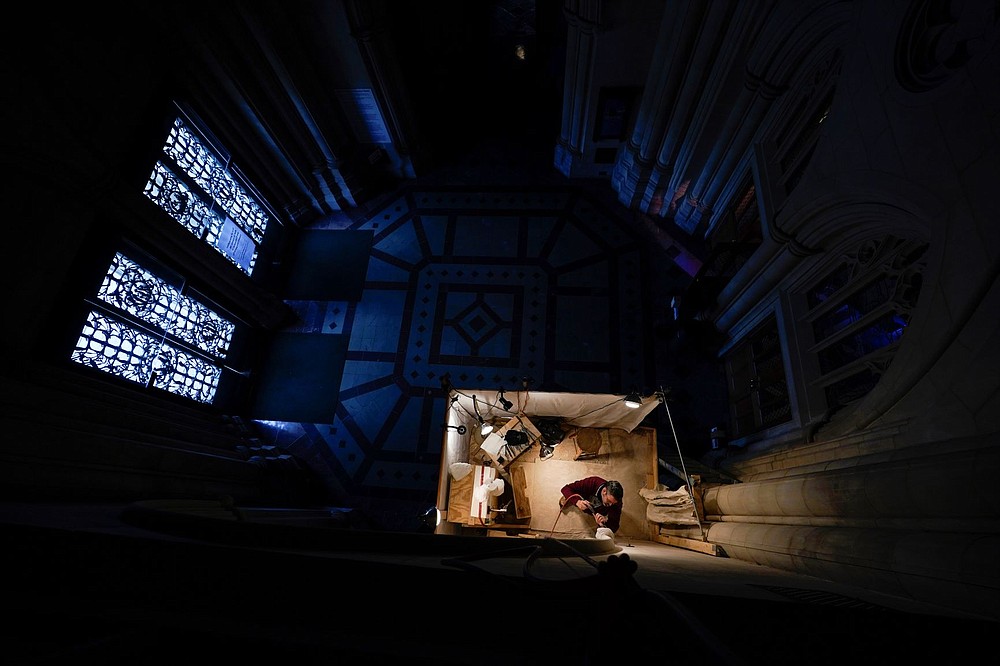 Washington National Cathedral stone carver Sean Callahan works on a sculpture of Holocaust survivor and Nobel Peace Prize winning author Elie Wiesel on a scaffold in the Human Rights Porch at the cathedral in Washington, Thursday, April 1, 2021. The carving completes a quartet of heads of prominent figures sprouting from the four corners of an alcove known as the Human Rights Porch, joining Mother Teresa, Rosa Parks and Jonathan Myrick Daniels, a young Episcopal theologian and civil rights crusader who was shot to death in Alabama in 1965, giving his life to protect a 17-year-old Black woman. (AP Photo/Carolyn Kaster)
ADVERTISEMENT