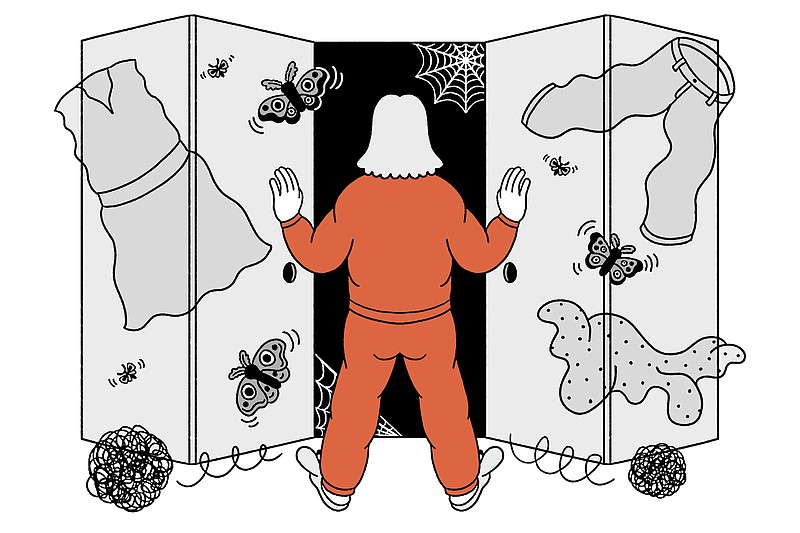 Get-togethers are being planned without Zoom links. Restaurant diners are venturing back inside. As the vaccine rollout continues to gain speed, more companies are reopening their offices. We're officially heading into new times. From a wardrobe perspective, these developments have generally meant one thing: putting on nonstretchy pants again.

Buttons and zippers and buckles are back, and with them more difficult decisions about what to wear to be seen in the world. After a year spent without such choices, this hasn't been the easiest transition for many. For those who've neglected their closets during the pandemic, returning to a full wardrobe can feel more like a confrontation than a homecoming.

"I feel like people need to be reintroduced to their closets again," said Allison Bornstein, a celebrity stylist who began offering virtual styling sessions to noncelebrities early in the pandemic — and March was her busiest month to date.

"People are like: 'OK, it's time to re-enter the world, and I need help. I have all this stuff, I don't know what I want to wear, and I don't like anything that I have,'" Bornstein said.

Professional organizers have been fielding similar complaints. Pia Thompson, founder of the home organization company Sweet Digs, said she recently worked with a client who hadn't even glanced at her dresses in a year. "Do I still want to wear any of these?" the woman asked while they sifted through her closet.

Spending parts of the last year in confinement has made people question their lifestyles — their social circles, their self-identities and now their wardrobes. If the world outside doesn't look the same anymore, why should they?

"People see this as a time to really figure out how they want to show up now," Thompson said. Figuring that out can mean experimenting with your appearance. But to get there, experts agree, you must first purge.

THE RULE OF THREES

There are many approaches to the closet purge. Nikki Boyd, the author of "Beautifully Organized," recommends starting by arranging your closet by category — tops, bottoms and so on — then sorting each category by color.

From there, Boyd suggested setting a few hard rules tailored to your needs. For example: no more than three of anything, including black shirts.

"It's just like anything else: no guidelines, no structure," she said.

A more emotional approach to decluttering comes from the school of Marie Kondo, the author, Netflix star and container manufacturer: Does the item you're touching spark joy?

"You get a thrill, your energy rises, you feel it in your heart as opposed to your head," said Thompson, a "KonMari" consultant in training, describing what you're supposed to be feeling when the response to joy is "yes."

The KonMari method generally starts with clothes, then moves on to books and papers before ending with sentimental keepsakes — the idea being that clothing is the easiest to discard and personal souvenirs are the hardest. Except that's not always true; clothes can carry as much baggage as mementos.

When Rebekah Love found a pair of Levi's that fit perfectly, she wore the jeans for years, until they eventually tore in the crotch. Even then she didn't want to let them go. She realized they represented a rare kind of "understanding," she said. "I found a brand that understands my body."

Now, as a professional organizer, she encourages people who cling to unworn clothing to identify what those pieces represent for them. She takes a holistic approach to organization, comparing mediocre outfits to unsatisfying relationships: "If you were around somebody who didn't make you feel good about yourself, would you continue to hang out with them?"

The pandemic has inflated a classic closet problem: holding on to things that no longer fit. A survey of more than 3,000 people by the American Psychological Association found that 42% of them gained more weight than they intended in the pandemic. Within this group, the average weight gain was 29 pounds, with a median gain of 15 pounds. The prevailing advice is to let go of these aspirational clothes.

"You reach for a pair of jeans that don't fit, and that just ruins your whole day," Bornstein said. "If they're not an option to wear at this moment, just get them out of there."

Storing ill-fitting clothes in a suitcase or box is an option, however, if you expect or hope they'll fit again someday (though Kondo may not approve). If you're determined to keep these clothes in your closet, Boyd recommends tagging their hangers with a sticker. If you go six months without reaching for the tagged clothes, throw them out. But throw them out responsibly.

Waste in fashion is a well-documented problem; a McKinsey report in 2016 found that "for every five garments produced, the equivalent of three end up in a landfill or incinerated each year."

Instead, used clothing can be donated to service organizations, such as the Salvation Army, the American Red Cross or Goodwill.

Job-interview-appropriate items for women can go to Dress for Success, and gently worn coats to One Warm Coat during the fall and winter months.

Madewell turns used denim into housing insulation through the Blue Jeans Go Green campaign, and North Face sends unwanted clothing and footwear to the nonprofit Soles4Souls. (Both retailers accept items from any brand, in any condition, and provide a store credit in return.)

WHEN CLUTTER ISN'T THE PROBLEM

Even after a closet is edited and organized, getting dressed again will require practice.

"When we're not used to it — when we're putting on sweatpants or staying in our pajamas or just wearing the same kind of thing every day — we're out of practice," said Bornstein, whose clients include actress Katie Holmes. "It is really daunting."

Her advice is to dedicate time to trying on clothes and experimenting with outfits. Take photos of your favorite combinations, put them in a folder on your phone, and refer to them like a catalog when you need inspiration or need to get ready in a hurry.

This process requires a great deal of self-awareness. Boyd believes that a wardrobe should always feel relevant — that "your closet, at every point in your life, should represent you in that time." As one of Love's hypothetical questions goes: If you had to buy that piece of clothing today, at full price, would you honestly buy it?

"It's not just about decluttering and creating systems," Thompson said. "It's a matter of really being honest about the kinds of things you want to do with your life, and then making sure that you have clothing that supports those things."

This doesn't have to be an existential crisis. It can be as simple as roller skates.

"If a client tells me they want to go roller skating, I know they'll need to have their skates at the front of the closet, as opposed to way in the back of the closet, where they have been," she said. "An organized closet represents who you are and who you want to be. It represents your truth."