PODCASTING: Godcast? Priest reads all of Bible in podcast 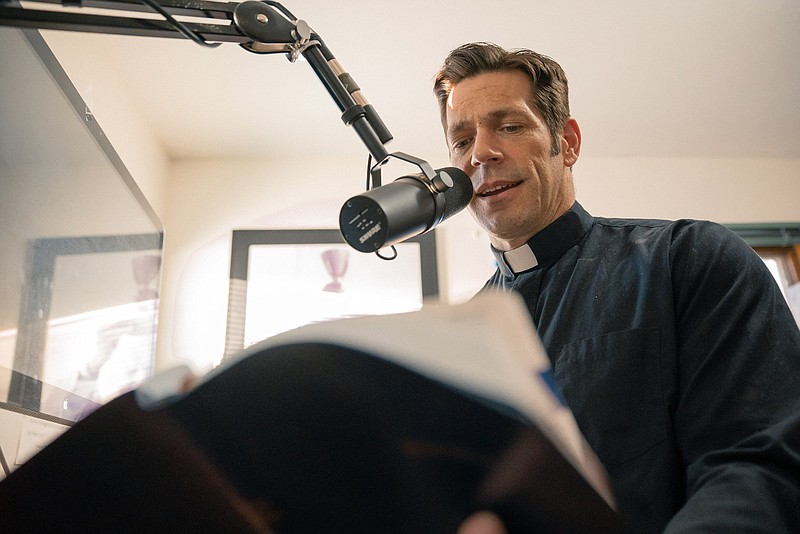 The Rev. Mike Schmitz of Duluth, Minn., is recording the entire Bible in 365 podcast episodes. The podcast is titled “The Bible in a Year.” (TNS/Ascension)

DULUTH, Minn. — Sometime last spring, feeling distressed and distracted by all that was going on in the world, the Rev. Mike Schmitz turned to the Bible.

"I realized it was grounding me in a unique way," the Duluth Catholic priest said. "It helped me find a sense of peace."

That gave Schmitz, an avid podcast and audiobook consumer, an idea: If others were seeking similar refuge from the chaos of 2020, why not create a podcast walking them through the holy book?

On Jan. 1, he debuted "The Bible in a Year," a 365-day series of episodes in which he will read aloud and provide commentary on the entire text by the end of 2021.

By the following day, the podcast had soared to the No. 1 spot on Apple's podcast charts, overtaking well-known true crime shows, comedy bits, political programs and news briefings.

"The Bible in a Year" was iTunes' most popular podcast for 17 consecutive days and has remained on Apple's Top 15 list ever since. (As of Thursday it was No. 9.) It has been downloaded more than 33 million times, according to Ascension Press, the Pennsylvania-based Catholic multimedia network in charge of production.

"It was a pleasant surprise because I'm literally just reading the Bible," Schmitz said. "It's just what people are hungry for, and that was really encouraging."

He teamed up with Twin Cities-based Bible scholar Jeff Cavins, who is featured regularly on the podcast to introduce new biblical eras and explain forthcoming characters and themes. Cavins developed the popular "Great Adventure Bible Timeline," which organizes all 73 books into a reading plan centered on the narrative parts of the text.

"A lot of people want to read the Bible, but they don't know how," Cavins said. "You can't look at it as a storybook — it's a library of books."

Schmitz and Cavins have years of experience recording other podcasts, which is perhaps why the instant success of "The Bible in a Year" caught them off guard.

"I think God is doing something, to be honest," Cavins said.

At the beginning of each episode, Schmitz introduces the podcast as a way to "encounter God's voice and live life through the lens of Scripture."

"The main goal was: How do we allow God's word to speak to us in a small way every single day in such a way that it shapes the way that we see the world?" he said.

Schmitz was raised in Brainerd, Minn., and went to college at St. John's University in Collegeville, Minn., before attending the St. Paul Seminary. The busy priest now juggles the new podcast with his duties as chaplain for the University of Minnesota Duluth's Newman Catholic Campus Ministries and director of youth ministry for the Duluth diocese, so he often records a few episodes at a time, usually early in the morning or late at night.

Each recording is about 20-25 minutes long and avoids mentioning specific dates so listeners can start the series at any time. Ascension also has a Facebook group with about 40,000 members where those listening to "The Bible in a Year" can connect and reflect on the day's readings.

Schmitz doesn't know what will happen once he reads the final verses of Revelations at the end of the year, but he's already mulling ideas for next steps — possibly a podcast diving deeper into specific parts of the Bible, like the Gospels, or one exploring the Catholic catechism, which explains the beliefs of the church.

He receives a handful of emails and letters each day from listeners around the world sharing feedback and personal experiences linked to the daily passages. Cavins added that the responses aren't coming from a single demographic — he's heard from families who listen to the podcast during breakfast, first-time podcast listeners, educators incorporating the podcast into their curriculum and people of other faiths curious about the Bible.

Like millions of others, each is familiar with the steady voice of the Duluth priest, who tells them at the end of his daily recordings: "I cannot wait to see you tomorrow. God bless."