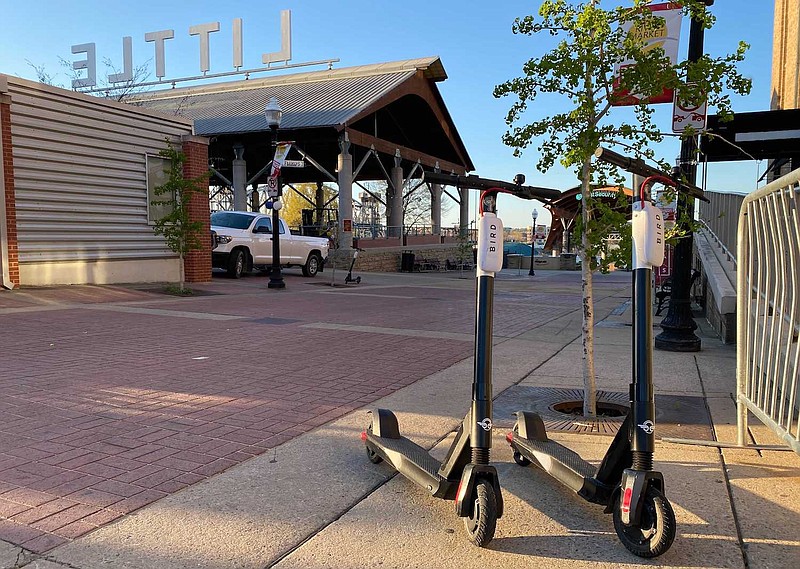 A second shared-scooter company has made its debut in Little Rock in the wake of a recent decision by city officials to implement a new municipal framework for riders and companies alike.

Electric scooters from Bird, a mobility-technology company based in Santa Monica, Calif., have appeared in the River Market district in downtown Little Rock.

The first provider to arrive in Little Rock, a little more than two years ago, was Neutron Holdings Inc., which offers shared scooters under the brand name Lime.

Lime scooters seemed to outnumber the devices from Bird in the River Market district Monday, but the arrival of a second shared-scooter company promises more options for riders and something of a competition between the providers.

However, Bird's arrival is unlikely to soothe the concerns of elected city directors who recently tried to regulate the devices with enhanced safety and zoning restrictions, an effort that was largely unsuccessful.

The jump-on, jump-off electric scooters from companies like Bird, Lime and Lyft have proliferated in urban areas around the country in recent years. Riders can unlock them using a mobile app, ride to their destination for a fee and leave the device behind.

Last year, Little Rock Mayor Frank Scott Jr. pushed members of the city's Board of Directors to adopt an ordinance that would rewrite the rules of the road for the scooters while allowing the city to obtain revenue from the devices.

After city directors passed an amended ordinance that added restrictions on the scooters related to the provision and approval of helmets and geographic restrictions based on zoning, Scott vetoed the measure in December.

"We look forward to presenting this ordinance again to address the spirit of the safety concerns without the heavy-handedness and regressive approach our city does not want to be known for," Scott said at the time.

Another version of the ordinance that did not contain the provisions Scott found objectionable passed in January by a 6-4 vote.

During debate over the measure, at-large City Director Dean Kumpuris expressed strong concerns about the safety of the devices.

Having seen "too many people on motorcycles or mopeds have problems when they get hit by a car," Kumpuris said he could not vote for the measure in good conscience.

Under the city's new framework, scooters are to be ridden on the street -- specifically in bicycle lanes, where one is available. Riders must be 16 or older. Additionally, riders younger than 18 must wear an appropriate helmet, according to the ordinance.

The new ordinance also stipulates that shared-scooter companies pay fees in order to provide their devices in the city, namely an annual $10,000 franchise fee and a $75 licensing fee assessed on each device operating in the city or using city right of way.

According to Stephanie Jackson, a spokeswoman for the mayor, Bird has received authorization for 300 scooters and Lime for 512.

Jackson provided records Monday that show both Bird and Lime have paid tens of thousands of dollars to offer their scooters in the Little Rock market.

A spokeswoman for Bird did not immediately respond Monday to a request for comment from the Arkansas Democrat-Gazette.