OPINION | REVIEW: Despite delay, ‘Godzilla vs. Kong’ lives up to its big name

The giant ape Kong from “Godzilla vs. Kong.”

There's something to be said for a movie that lives up to its title.

Some filmmakers haven't managed to deliver on the absurd delights promised by ideas like "Snakes on a Plane." As much fun as it was to hear Samuel L. Jackson recite his favorite synonym for incest, the fan tributes were infinitely more entertaining than the finished movie.

With 2019's "Godzilla: King of the Monsters" viewers had to slog through some muddled laments about how humans have made the planet dangerous for monsters and other living things before we got to see Godzilla and Mothra duke it out against Rodan and Ghidorah. While Vera Farmiga and Charles Dance bickered over who was the real ecoterrorist, we waited a long time to see what we'd paid to see.

There's nothing wrong with a little allegory to go with the monster on monster action. Ishiro Honda's original 1954 "Gojira" is still scary because Godzilla's path of destruction looks a lot like the damage done to Hiroshima and Nagasaki. The big green lizard with the fiery, radioactive breath is a chilling metaphor of what happens when technology gets ahead of moral and intellectual development.

If director Adam Wingard isn't aiming for symbolism here, he and his legion of collaborators deserve credit for simply delivering a battle worthy of the big screen. If he and the screenwriters have ditched allegories, they at least gave "Godzilla vs. Kong" just enough emotional weight to make the buildup to the conflict worthwhile.

As with the previous Kong and Godzilla movies that Legendary Pictures have bankrolled, there is an overqualified cast who treat having to gaze up at giant lizards and gorillas as if the tale were as weighty as "King Lear." Thanks to their commitment, it's a little easier to believe these biologically impossible creatures are tearing up cities.

My high school chemistry teacher broke our hearts by telling us flesh and bone couldn't support land animals that massive. If the people on screen can't convey horror and wonder effectively, it's not going to rub off on the people in the theater.

It helps that in "Godzilla vs. Kong," the humans actually have meaningful interactions with the giant kaijus. In the beginning of the film, we learn that Kong has bonded with a deaf girl named Jia (Kaylee Hottle). In a rare nod to plausibility, the two can communicate in American Sign Language. Language researches used ASL because gorillas and chimpanzees don't have the same vocal cords we do.

This may be a bit maudlin, but it makes us more invested in how Kong will do in his forthcoming bout with Godzilla. Speaking of the Tokyo Terror, an unscrupulous tycoon named Walter Simmons (Demián Bichir) thinks there is a potential gold mine in exploring the subterranean world where titans like Kong and Godzilla originated. A pair of wary scientists, Nathan Lind (Alexander Skarsgård) and Ilene Andrews (Rebecca Hall), see if they can get Kong to take on Godzilla after he has decimated one of Simmons' plants in Pensacola.

Yes, you read that correctly. Kong and Godzilla inflict mass destruction on cities other than Tokyo and New York (those places sure need a break). Because of the labor-intensive process of making this film, it's hard to tell how much credit Wingard, who gave us the terrific Columbia, Mo.-shot thriller "You're Next," deserves.

That said, it's refreshing to see Kong and Godzilla pulverize each other and Hong Kong in broad daylight. In too many recent kaiju movies, the monsters duke it out in thunderstorms which make it hard to see how well the computer-generated monsters were rendered. Peter Jackson's Weta creature shop has created a Kong with a seemingly endless range of emotions, so it's easy to care if he emerges victoriously.

This is actually a better movie than Honda's own 1962 "King Kong vs. Godzilla," which featured an impressive giant squid but reduced Kong to a dull cypher.

It doesn't hurt that "Godzilla vs. Kong" knows when to quit. "Godzilla: King of the Monsters" lumbered through it's two-hour-plus running time. I guess the world's two favorite monsters are fine on their own and don't need any additional help.

Opening theatrically and on HBO Max 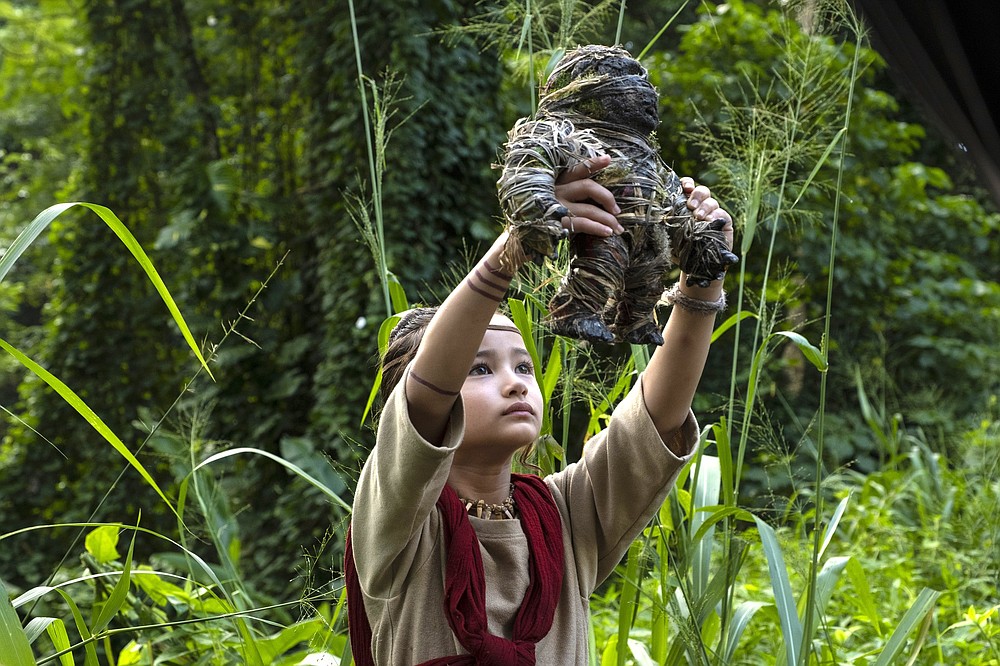 In “Godzilla vs. Kong,” Jia (Kaylee Hottle) is a deaf orphan, a member of the Iwi tribe on Skull Island, with whom the giant ape Kong has a special bond — the two communicate via American Sign Language.
ADVERTISEMENT