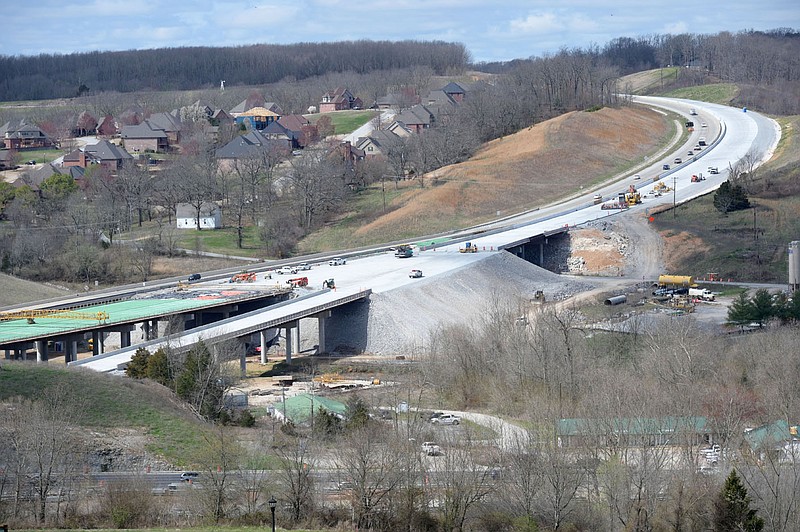 Construction of the Bella Vista Bypass, also known as the Interstate 49 Missouri/Arkansas Connector, is on schedule to be open to traffic in the fall, according to highway officials in Arkansas and Missouri. Check out nwaonline.com/210325Daily/ and nwadg.com/photos for a photo gallery. (NWA Democrat-Gazette/Spencer Tirey)

BELLA VISTA -- The Bella Vista Bypass is on schedule to open to traffic in the fall, according to highway officials in Arkansas and Missouri.

Completion of a major interchange in north Bentonville and adding two lanes to the bypass are priorities for finishing the Arkansas side.

"We are expecting the interchange project to be complete in the October-to-November time frame, and the other construction jobs on the bypass in Arkansas should also be completed by that same time," said Steve Lawrence, District 9 engineer with the Arkansas Department of Transportation.

A welcome center is planned for just south of the state line.

A portion of the Bella Vista Bypass opened to traffic in May 2017 with the completion of a 12.1-mile, two-lane section connecting U.S. 71/I-49 to to Arkansas 72 near Hiwasse.

A 2015 study reported that U.S. 71 in Bella Vista was one of the most congested corridors in the region, according to Tim Conklin at the Northwest Arkansas Regional Planning Commission. Five segments of the corridor ranked among the 20 most congested roadways in the area.

Highway Department traffic counts show about 22,000 vehicles a day passing through Bella Vista on U.S. 71 near the state line, which is Bella Vista Way. About 18% of those vehicles are trucks. Regional planners anticipate most trucks will opt for I-49 when it is complete, except for local deliveries.

Mayor Peter Christie said he will be glad to have the trucks off the main drag because of the congestion they cause.

"We have a lot of people who are quite leery about driving on 71 because of the heavy truck traffic, and I suspect we'll see more people start to use that artery," Christie said.

Christie said he doesn't think moving traffic to I-49 will have a significant impact on sales tax revenue because the truckers don't stop for the most part and neither do out-of-state people passing through.

"I'm excited not only for ourselves, but I think the truckers will appreciate it, too. I think it's a win-win for all parties," he said.

Christie said he recently got a tour of the bypass work from highway department representatives.

"Arkansas is just about done. Past the last exit, which is Rocky Dale Hollow, if you go beyond that, it's finished all the way to the border," he said. "Both sides, all the striping is done, all the signs are up. It's kind of exciting to see the whole thing come together."

A tunnel under the bypass interchange in north Bentonville for the relocated Razorback Greenway is complete, but the tie-ins at the end of the tunnel have not been built, Lawrence said.

Christie said the new 380-foot tunnel is a collaboration between the Walton Family Foundation and the Transportation Department and replaces a series of box culverts.

"So, it'll be a straight shot, and I think that'll improve the experience that people have on the Razorback as well," he said.

Extensive work constructing the retaining walls above the tunnel likely means it won't be opened and traffic allowed on that part of the greenway until toward the end of the project. The tunnel was relocated as part of the interchange project to move it out of a low-lying area, which was prone to flooding during heavy rain.

North of the state line, the Missouri Department of Transportation is also on schedule to finish its 5-mile portion of the highway by the time crews in Arkansas are done with theirs, according to Craig Switzer, transportation project manager.

"We are still on schedule to finish up the Missouri side of I-49 by September 30, 2021," Switzer said. "Overall, the project is nearly 70% complete. Major grading operations are winding down and are expected to be complete toward the end of April."

The bridge that carries Missouri Route 90 over I-49, west of Jane, is complete and open to traffic, Switzer said. Crews are working on the bridge that will carry the I-49 northbound lanes over the U.S. 71 southbound lanes at the north end of the project. That bridge is expected to be completed by the end of May.

Emery Sapp & Sons is the primary contractor for the new interchange at Bentonville, new lanes of the bypass from Benton County 34 to the state line and Missouri's portion of the project. The cost of the 2.5-mile stretch of road in Arkansas will be about $35.5 million.

Missouri awarded a $58.7 million contract April 1 to Sapp & Sons to build the final 5 miles of I-49 between Pineville and the state line in McDonald County. Work started May 11 with completion expected by Sept. 30.

The bypass will allow motorists to circumvent Bella Vista to the west and south on a four-lane interstate. The project is also known as the Interstate 49 Missouri/Arkansas Connector, a nod to its regional importance.

Arkansas officials awarded bids in July 2019 and broke ground in October of that year on two sections needed to fill missing links on the Arkansas side.

The two projects were the last 2.5 miles from Hiwasse to the state line and the single-point urban interchange to replace the roundabout at I-49 and U.S. 71 in north Bentonville where the new highway heads west. The estimated cost of the two projects is just more than $100 million. Emery Sapp & Sons is the primary contractor on both.

A third project, adding the remaining 6 miles of two lanes on the Arkansas side, is underway with Kolb Grading as the primary contractor on the $52.6 million job.

The goal is for both Arkansas and Missouri to build their parts and meet at the state line in late 2021 or early 2022, according to regional planners.

The ultimate goal is completion of the 278-mile section of interstate between Fort Smith and Kansas City, Mo. Bella Vista is the only stretch where traffic has to leave I-49 and continue on U.S. 71 to travel. Allowing motorists to bypass Bella Vista and its multiple traffic signals should reduce travel times and improve safety, planners have said.

The Northwest Arkansas Regional Planning Commission got a $25 million federal grant in December 2018 and gave the money to Missouri to complete I-49. The I-49 Missouri project is in the commission's planning area.

"The Regional Planning Commission was pleased to play a part in securing the funding to complete the project," Conklin said.

The project has been discussed for more than 25 years and is considered a priority by Northwest Arkansas and federal transportation officials. The Northwest Arkansas Council, a group of civic and business leaders, prioritized completion of the highway, describing it as one of the region's most important projects. 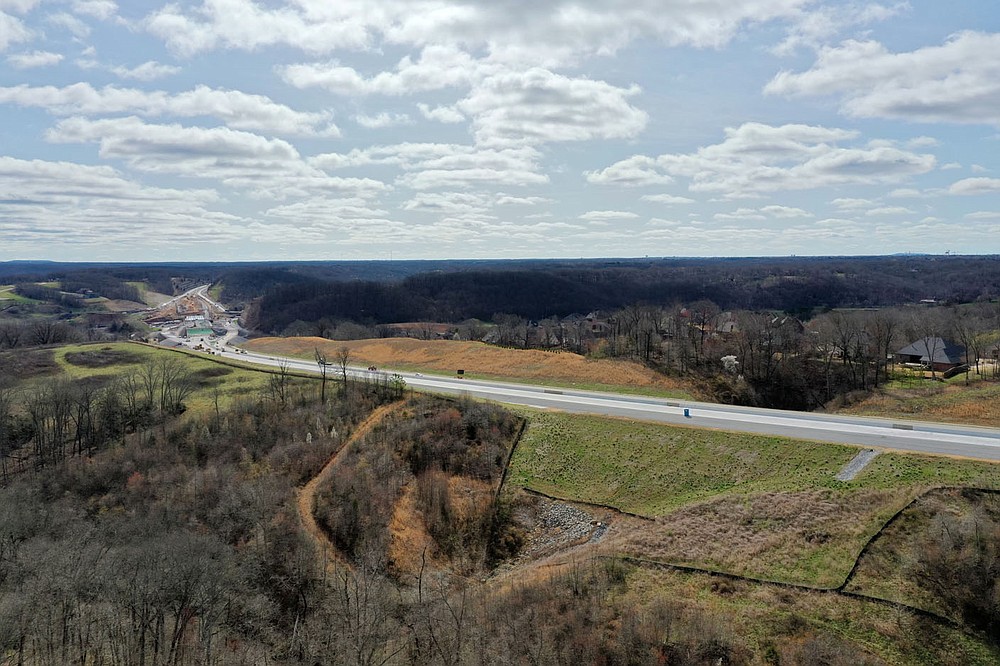 Construction of the Bella Vista Bypass, also known as the Interstate 49 Missouri/Arkansas Connector, is on schedule to be open to traffic in the fall, according to highway officials in Arkansas and Missouri. Check out nwaonline.com/210325Daily/ and nwadg.com/photos for a photo gallery. (NWA Democrat-Gazette/Spencer Tirey)
ADVERTISEMENT