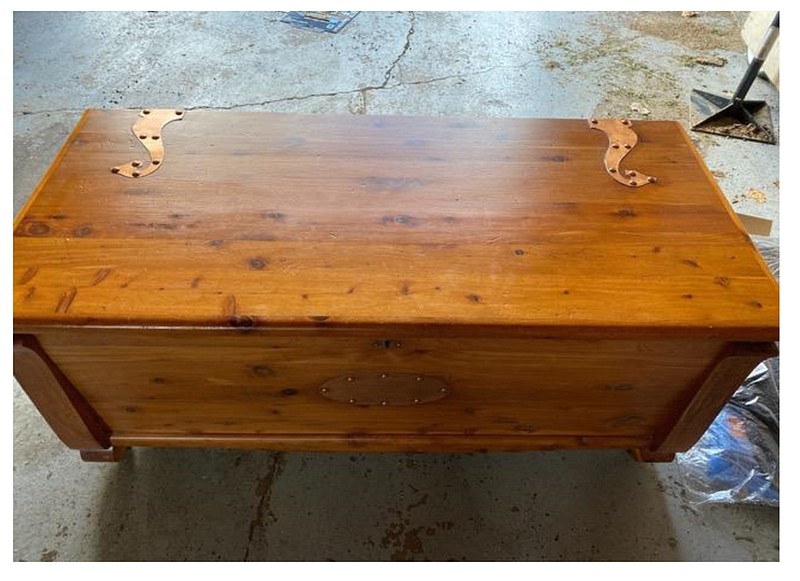 Many humans love the smell of cedar, but bugs don't. (Handout/TNS)

DEAR HELAINE AND JOE: This is the first time I think I have bought something I think is an antique. I bought a cedar chest made by The Roos Mfg. Co. at a thrift store in Minneapolis for $100. I am hoping you will give me an idea as to whether it might be worth a little more. There are castors and minor blemishes on the outside, but no damage on the inside. Hope you have good news for me.

DEAR R.F.: Joe vividly remembers the cedar chest that sat at the foot of the bed in his mother and father's bedroom for decades.

The cedar chest was forbidden territory to little boys. Mother kept her best "company's-coming-to-visit" linens inside. These were fancy pieced quilts and linens she had elaborately embroidered with colorful silk floss — then washed, starched and ironed until achieving near-perfection.

Up until the mid-20th century, cedar chests were common in American homes (particularly in the South). Some were used for storage, others were used for hope chests — also known as dowry chests, trousseau chests or glory boxes. These chests can be found made from wood other than cedar, such as mahogany, walnut or pine, but cedar was often the choice because it contained an oil that repelled moths and other household insects and suppressed the growth of fungus.

Early European dowry or hope chests were handmade and could be extensively decorated with painted or carved designs. But by the beginning of the 20th century, the simple cedar chest was machine-made in a factory and tended to be rather plain. There could be raised panels on the sides and the top could be upholstered, but most that are found by today's collectors are rather utilitarian.

In the 20th century there were two major manufacturers of cedar chests. The Lane Furniture Company of Altavista, Va., made cedar chests from about 1920 to 2001. (Lane's actual time of existence was between 1912 and 2014.) The maker of the chest in today's question was The Roos Manufacturing Co. of Forest Park (Chicago).

Roos was founded in 1871 by Edward Roos and was initially a maker of curtain rods and wooden boxes. Roos died in 1906 and his eldest son, Otto, took over. In 1916, the youngest son, Edward, began the Roos Cedar Chest Co., and in 1918, they opened another company called the Ed Roos Co. of Forest Park, which also made cedar chests.

Roos became the largest manufacturer of chests in the world, but World War II intervened and the companies were sold off in 1951 and closed in 1955. The example in today's question is probably from circa 1930, and although close, is not yet an antique. The one thing beyond age and condition that this Roos cedar chest has going for it is the wonderful pointed S-shaped hinges with the raised tacks that appear to be made from copper.