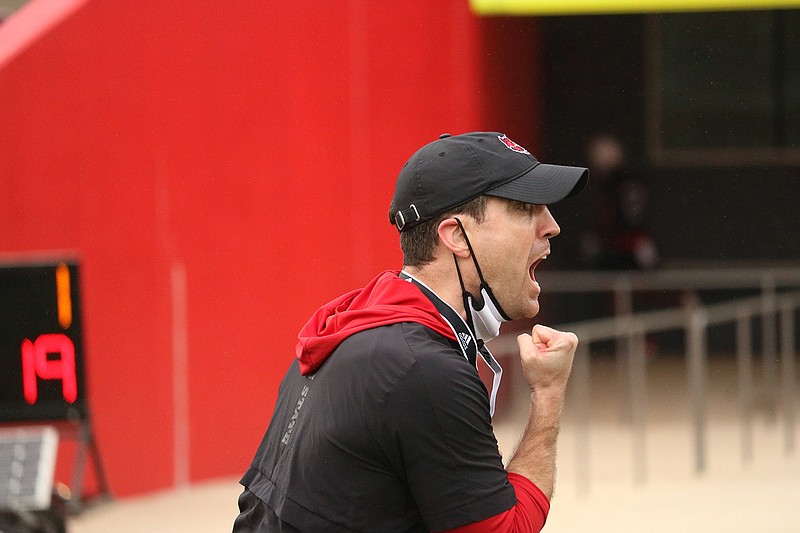 Arkansas State defensive coordinator Rob Harley (above) made an impression on Coach Butch Jones with the depth of knowledge he acquired from Pat Narduzzi at Michigan State and Pittsburgh over eight of the past nine seasons. (Photo courtesy Arkansas State Athletics)

For the previous six years, Harley coached linebackers for Pittburgh Coach Pat Narduzzi, learning under one of the nation's sharpest defensive minds. At ASU, Jones pitched a program centered on discipline, drive and physicality -- three of his favorite buzz words -- and a four-down lineman defensive scheme, a set of ideals that paralleled the hallmarks of success Harley experienced at Pitt.

"Everything Coach Jones presented resonated with me," said Harley, 38. "The concepts weren't new. When you're kind of speaking the same language and you believe in the same things, you hit it off and it's easy to want to be a part of something like that."

A former Ohio State safety, Harley spent eight of the past nine seasons with Narduzzi. He joined him at Michigan State in time to watch Narduzzi guide the Spartans defense to the 2013 Big Ten title as a coordinator. In 2015, he followed him to Pitt, where Narduzzi has sculpted a perennial powerhouse defense that allowed the fewest yards in the Atlantic Coast Conference last fall.

The years spent next to the 2013 Broyles Award winner showed Harley the scheme and mentality required to build a prolific defense, and prepared him to one day run a defense of his own. At ASU, he's got his chance, working once again with a head coach and a program he's philosophically aligned with.

"You have to go into every day thinking, 'What are we doing to get the players better and the program better?' " Harley said. "That's kind of what I bring from Pitt. It's the same vision from Coach Jones. For me, it's the same. It's what I'm used to."

The four-down defense -- featuring four lineman on the line of scrimmage with an emphasis on winning up front -- has been a staple of Jones' programs at each of his previous head coaching stops, and the scheme came with him to Jonesboro.

The set-up dictated his search for a defensive coordinator, and he looked no further than the Pitt program, which executes the four-down scheme as well as any program in the country and led the nation with 46 sacks in 2020. In Harley, Jones found a coach with a deep understanding of the process that fueled the Panthers' physical defense, and a mind in-tune with the defensive intensity Jones wanted to bring to ASU.

"I have such respect for the way they play defense at Pitt and what they've been able to do," Jones said. "Rob's knowledge and his background defensively really stood out. The more and more we spoke, the more and more impressed I became."

Harley's depth of knowledge developed under Narduzzi's mentorship. He arrived to Michigan State as a graduate assistant in 2012 after two seasons at Division II Ohio Dominican. He had a front row seat as Narduzzi's Spartans finished atop the Big Ten in total defense in 2012 and 2013, and Harley reunited with him at Pitt after one season at Florida International.

In both places, Narduzzi forged blueprints that Harley soaked up. At Michigan State, Narduzzi taught him to recruit and showed him how to manage a championship defense. Then the time at Pitt offered lessons in program building, player development and game management.

"I just learned a lot of things peripherally," Harley said. "I owe a lot to him in terms of my maturation as a coach."

He also picked up the defensive insight that made Narduzzi's Michigan State and Pitt defenses so overpowering.

The scheme he knew with Narduzzi and the one Harley and Jones are devising at ASU now are not unique from any other four-down scheme in the country. The key to Pitt's defense were simplified instructions, assigning individual defenders narrow and specific jobs rather than forcing them into a complex scheme. The result was a defense that could play fast and physical with a freedom to make impact plays, all characteristics Jones highlighted when discussing his goals for the defense during his introductory news conference.

Under Narduzzi, Harley learned a defense predicated on that simple idea, something he's now introducing at ASU.

"It's unique maybe because we do try to keep it simple and let these guys play fast," he said. "We're not doing something crazy that no one has ever seen before. When we're playing fast and playing together, that's when the system really starts to flow. All 11 guys are in sync. That's what we're striving for."

The shift has been apparent in the early weeks of spring practice with defenders excited about the changes to a Red Wolves defense that allowed 470.8 yards per game last fall, finishing 115th in the nation.

"We're flying around," senior linebacker Caleb Bonner said. "We're very physical. If you go out there, you'll see we're communicating. We're just trying to soak it all up."

ASU returns nine starters to a defense that is slowly adjusting this spring to a new staff and an altered scheme. The four-down defense is pushing Red Wolves defenders into different roles with changed responsibilities, but the digestable approach Harley has delivered is helping with the transition toward a more physical front.

"The way [Harley] portrays everything, he just relates it to you," junior defensive end T.W. Ayers said. "The instructions are simple, and you know exactly what he wants out of you. It allows you to go do that to the best of your ability."

Defense hasn't been the identity for ASU in the ways Harley experienced it at Michigan State or Pitt. But from his time at both schools, he brings a clear vision for a defense he expects to make an impact in the fall.

"A lot of success is going to run through playing good defense," Harley said. "That's not to say that we're the soul of the team, but we have to believe that our part is as important as any."

NOTEWORTHY Harley comes to the Red Wolves from Pitt, where he served as linebackers coach for six seasons and also as the Panthers’ recruiting coordinator for the past four seasons. … In 2013, he was a member of the Michigan State coaching staff that led the Spartans to a Big TEN conference title and a Rose Bowl victory over Stanford. … Harley played safety at Ohio State from 2001-05 and was part of the Buckeyes’ 2002 national championship team.

NOTEWORTHY Joiner was promoted to coach the Red Wolves’ defensive line in 2019 after three seasons as a defensive assistant under former coach Blake Anderson. … He was a two-year letterman at ASU in 2010-11. In 2011, Joiner was part of the Red Wolves’ Sun Belt Conference championship team and was named conference defensive player of the year. … Spent three seasons in the NFL with the Cincinnati Bengals from 2012-14.

NOTEWORTHY Shalala spent the 2020 season as a defensive quality control coach at Mississippi State. … He was hired by Butch Jones as a graduate assistant at Tennessee in 2016. … Shalala was a member of the Grand View University team that won the NAIA national championship in 2013.

NOTEWORTHY Hilliard comes to ASU after two seasons at Tennessee-Martin, where he coached cornerbacks and served as defensive pass game coordinator. … He made 27 starts as a safety for UCLA from 2009-12 before signing with the Chicago Bears as an undrafted free agent in 2013. Hilliard later played professionally in Italy. … He played and later coached at Hawaii’s Punahou High School and holds recruiting ties in the region.

NOTEWORTHY Hauser spent the past three seasons as a special teams analyst at Iowa State and helped lead the Cyclones to a Fiesta Bowl victory over Oregon on Jan. 2. … He has worked under Power Five head coaches Matt Campbell (Iowa State) and Mike Gundy (Oklahoma State), and spent two years in the personnel department of the NFL’s Cleveland Browns. … Hauser was a three year starter at Wesleyan (Conn.) University. 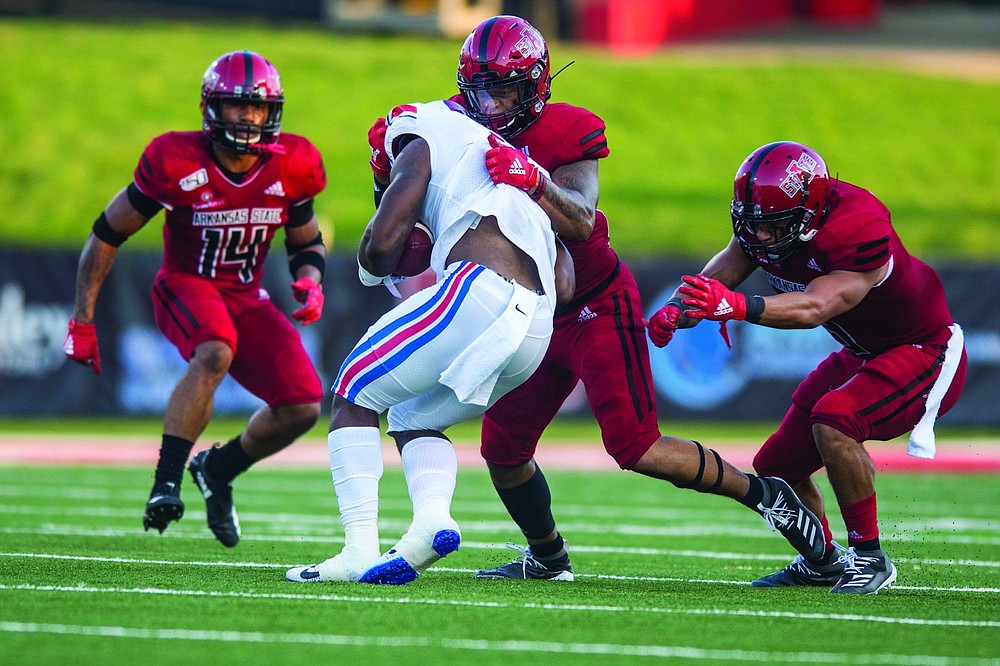 Arkansas State senior linebacker Caleb Bonner said he and fellow defenders are adapting well to the changes the new coaching staff is making. “If you go out there, you’ll see we’re communicating,” he said. “We’re just trying to soak it all up.” (Arkansas Democrat-Gazette file photo)
ADVERTISEMENT