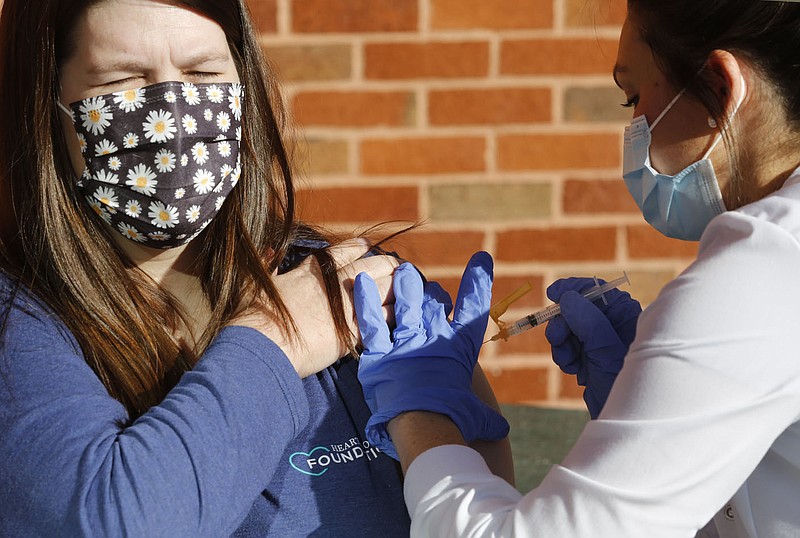 Veronica Harden, R.N. Supervisor at the Arkansas State Veterans Home at Fayetteville, receives a covid-19 vaccine shot Tuesday from Falon Lacey, a pharmacist with AllCare Pharmacy, in front of the home in Fayetteville. The first round of vaccinations were given to residents and staff in Fayetteville and at the facility in North Little Rock that both provide long-term care and short-term rehabilitation. Check out nwaonline.com/210106Daily/ and nwadg.com/photos for a photo gallery. (NWA Democrat-Gazette/David Gottschalk)

Benton County and Collier Drug Stores plan to fully vaccinate 10,000 people against covid-19 in a series of clinics they'll co-host over the next 13 weeks, according to Michael Waddle, director of emergency management for the county.

The first of 13 weekly clinics will be 11 a.m. to 7 p.m. Wednesday at the Benton County Fairgrounds and is already full, according to a news release from the county.

The clinics will offer the Pfizer vaccine, which requires two doses three weeks apart. The county and Collier will give 1,000 first doses at each of the first 10 clinics and 1,000 second doses each week beginning with the fourth clinic, Waddle said.

"We are excited to be working with Collier Drug Stores to provide this clinic to our community," Waddle said in the news release. "This is one step closer to getting out of this pandemic and getting back to somewhat of a normal life."

Appointments are required. Residents who wish to make an appointment may call (479) 935-4316 and leave their number, date of birth, county of residence and their full name, which they should spell out. People may also make appointments online. The county plans to post links on social media and the Northwest Arkansas Council's vaccine calendar on its website.

Mercy Health System will be able to give 1,000 vaccine doses each weekday starting Monday, according to a news release from the system. Mercy began allowing anyone eligible to get vaccinated Feb. 17 at its Springdale clinic.

"As the state has increased the supply of vaccine, Mercy has been able to steadily increase the number of patients scheduled and plans to continue to offer more daily appointments as the state expands eligibility," the release states.

Mercy planned to give 23,000 vaccine doses, including first and second doses, by the end of the day Friday, according to Jennifer Cook, spokeswoman. Vaccine appointments are available 8 a.m. to 3:30 p.m. Monday through Friday.

Benton and Washington counties had 47,802 residents fully vaccinated against covid-19 as of Thursday, while another 45,687 had received the first of two doses, according to the Arkansas Department of Health.

The two counties have a combined population of 384,234 residents 16 and older, so about 12.4% of that group have been fully vaccinated while about 11.9% are halfway there.

Benton and Washington counties had 310 new virus cases from March 20 through Friday including 152 cases in Benton County and 158 cases in Washington County, according to the Health Department.

Rogers Public Schools had 18 active cases as of Thursday, according to the Health Department. Springdale had 13 active cases, and Bentonville had nine. Fayetteville Public Schools was not on the department's report, which means it has fewer than five cases or no cases. The district reported last week it had no known active cases for the first time since it began tracking them in August.

Northwest Arkansas hospitals had a total of 14 patients in their covid-19 units as of Thursday, according to a joint statement from the region's largest health care organizations via Martine Pollard, spokeswoman for Mercy Health System. The record for most hospitalizations in the region on a single day was 140 patients Jan. 8.

Both antigen tests and polymerase chain reaction, or PCR, tests are used to test for covid-19. Antigen tests produce faster results, are generally used only on people with symptoms of the virus and have a higher chance of giving false-negative results. Antigen and most PCR tests are done via nasal swabs.

Who can get vaccinated?

• Phase 1-C: Residents 16 to 64 with health conditions that increase their risk to covid-19; essential workers in areas that include energy, finance, food service, law, media, information technology and communications, public health and human services, public safety, shelter and housing and transportation and logistics; people living in high-risk settings, including those who are incarcerated or detained; those living in group homes, congregate settings, or crowded housing; and student housing such as dorms and Greek housing