4-star 'jumping up and down' during Arkansas win 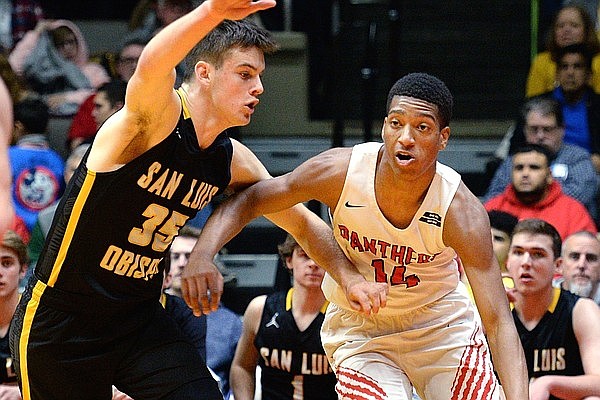 Arkansas’ come-from-behind victory over Oral Roberts to advance to the Elite Eight for the first time since 1995 caught the attention of recruits and parents.

Four-star junior combo guard JoJo Hunter, 6-6, 195 pounds, of Fresno (Calif.) San Joaquin Memorial, was on the edge of of his seat during the 72-70 win over Oral Roberts.

“I love it. I was jumping up and down in front of the TV,” said Hunter, who has offers from Arkansas, Arizona, Southern Cal, California, Ole Miss and others. “They didn’t start off too well, but as I always say they stayed together mentally and got the dub.”

Nothing But Net Magazine’s Van Coleman rates Hunter a 4-star prospect and the No. 48 prospect in the nation for the 2022 class.

“It was a great game that came down to the wire,” Walsh said. “I’m just glad Arkansas pulled out with the win.”

Walsh, 6-7, 200 pounds, of Faith Family Academy in Oak Cliff, Texas, has offers from schools such as Arkansas, Texas, Texas Tech, Texas A&M, Auburn, Oklahoma State, California and others. ESPN rates him the No. 8 small forward and the No. 35 overall recruit for the 2022 class.

“Good win for the Razorbacks,” Warren said. “They battled to the end and they are on a roll.”

“Coach Muss and his staff have done a phenomenal job this year with this team,” Lloyd Sr. said. “Exciting and winning brand of basketball. Huge accomplishment making it to the Elite Eight.”

“The team kept battling through adversity,” Ford said. “Everybody wanted to win. I know this game made them even more ambitious about the rest of the season.”

His father, Darnell, was equally impressed.

“As I was sitting here watching the Arkansas game, I was on the edge of my seat,” he added. “I really like how the guys didn't give up and pulled out the victory.”

“It looked like ORU would win tonight, but the Razorbacks found a way to bounce back to win,” Blocker said.

“They’ve been battling from behind all tournament and found a way to win,” Blocker said. “A buddy of mine pointed out that they have overcome double-digit deficits each round. Baylor will be a tough matchup.”

“(Musselman's) kids find a way to win,” Lupe said. “Back-to-back games closing it out at end shows some resilience, toughness and a bit of luck helps. The Muss Bus versus Baylor (will be) must-watch TV.”