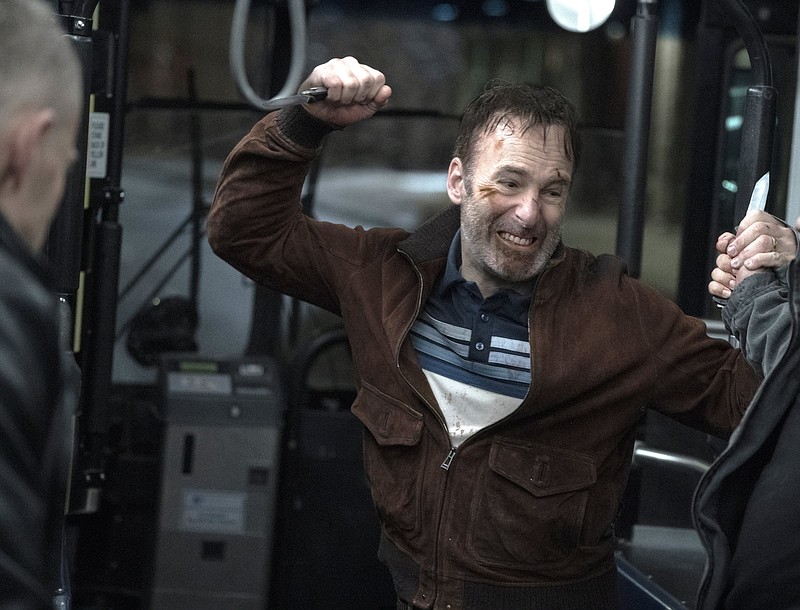 To anyone but the hardiest of "Mr. Show" fans (guilty!), Bob Odenkirk is best known for his role as Saul Goodman/Jimmy McGill in "Breaking Bad," spearheaded by Vince Gilligan, and its subsequent prequel, "Better Call Saul," which Gilligan created along with regular "Bad" contributor Peter Gould. Both series are typified by Gilligan's particularly rewarding writing style, in which every plot detail and movement is impressively accounted for. There are no cheap leaps of logic, or obvious plot holes with which to quibble. So tightly wound are the plot threads, you could fashion a Kevlar vest out of the fabric.

Odenkirk's latest starring vehicle, "Nobody," directed by Ilya Naishuller, and written by Derek Kolstad, alas, is a horse of a completely different color. Sort of fashioned in the manner of a loose-logic graphic novel, it asks you to ignore just about everything except extreme carnage and the graceful swoop of flying ballistics hurtling into bodies.

It's also a nakedly keening suburban dad fantasy, in which his seemingly dull ordinariness is but a facade for a hyper-efficient assassin when the situation calls for it. Odenkirk plays Hutch Mansell, a nebbish sort of fellow who lives in the 'burbs of an unspecified city (it was shot in Winnipeg) with his successful Realtor wife, Becca (Connie Nielsen), and two kids, and works as the accountant at a manufacturing warehouse owned by his father- and brother-in-law (Michael Ironside and Billy MacLellan). He lives well within the the confines of Thoreau's "quiet desperation" so many middle-aged people achieve. His wife keeps a fortress of pillows between them, his teenage son thinks he's a wimp, and he barely registers everywhere else.

One night, however, he interrupts a pair of burglars clumsily breaking into his house. Rank amateurs, he allows them to get away, but in the process gets ridiculed and humiliated by everyone around him (one cop at the crime scene: "If that was my family ..."), and his son, Blake (Gage Munroe), loses even more respect for him. It's not until his young daughter, Abby (Paisley Cadorath), pipes up that Hutch has finally had enough, and seeks revenge. To that end, he goes to the rest home where his father, David (Christopher Lloyd), resides, steps to the closet and pulls out a hidden box of items, including a worn leather coat, and a spiffy-looking handgun. Turns out, he's not just an accountant, but a wildly dangerous former agent of the FBI and the CIA, with a long history of killing everyone in his path (the whole "accountant" idea becomes a kind of in-joke -- the only ledgers he cleared before were in body bags).

He tracks down the would-be robbers -- who inexplicably live together in a nice apartment with a small baby in tow -- but realizes they don't require his vengeance. Disappointed, he gets on a city bus back to out to the 'burbs, but there meets a group of leering thugs whom he proceeds to beat the living hell out of. Naturally, one of these goons is the (much!) younger brother of a Russian mobster named Yulian (Alexey Serebryakov), who, among other things, is tasked with guarding the mob's Obshak, a sort of repository of pension funds for retiring criminal heavy-hitters. This leads to an escalation of violence, ultimately building into a showdown between the now-reinvigorated Hutch, his elderly father, also a trained killer somehow, and his former partner, Harry (RZA), and wave after wave of Russian lackeys, along with Yulian himself.

If the story sounds familiar, it should. Kostad steals broadly from both David Cronenberg's "A History of Violence," and Chad Stahelski's "John Wick" chronicles, to arrive at his everyman assassin. Unfortunately, the film lacks the former's philosophical bent, nor the latter's innovative action stunts to fall back on. Instead, we get plot sillinesses, on-the-nose music cues ("I've Gotta Be Me," when Hutch takes on the bus thugs; "What a Wonderful World," when he burns his former house down to the ground, and so forth), plenty of clumsy action choreography, and long-winded explanations of Hutch's origin story we don't really need.

As always, Odenkirk is a treat to watch, even in blatant silliness such as this, and brings to Hutch a kind of relish to his ferocity -- the sort of man who has for too long been intentionally keeping his hands in his pockets. For every dumb action sequence -- the end of the film, with Hutch's well-placed, home-made booby traps firing off at the mobsters left and right plays like a vastly more bloody version of "Home Alone" -- there's at least a few moments of more genuine inspiration (RZA dispatches a pair of mobsters by shooting one with a shotgun over his shoulder, and letting the recoil pop the other in the face), but there's nothing much more to see here, other than the empty calories of cartoonish violence.

In a different sort of film, it might have been interesting to blur the lines between Hutch's fantasy version of events and the reality of his drab existence, but the filmmakers aren't interested in taxing their viewers' imaginations in this way. They're quite happy to leave Hutch less Walter Mitty, and more Deadpool.

Rating: R, for strong violence and bloody images, language throughout and brief drug use