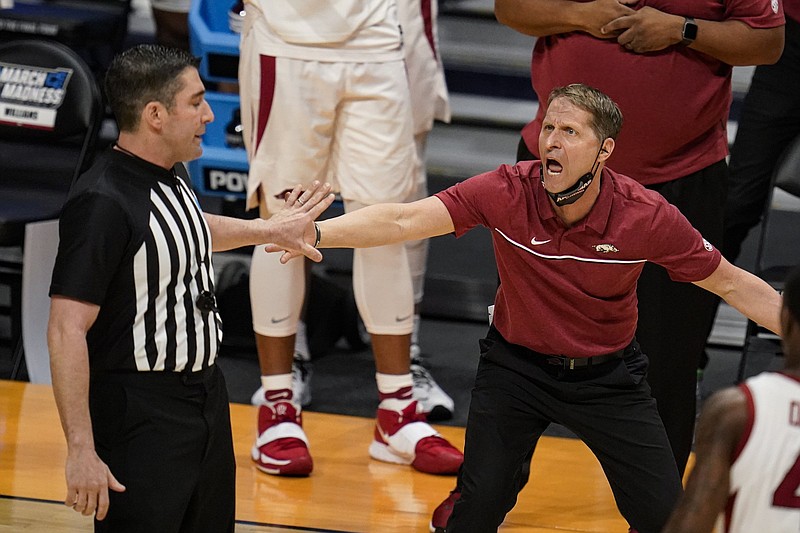 Arkansas head coach Eric Musselman questions a call in the second half of a second-round game against Texas Tech in the NCAA men's college basketball tournament at Hinkle Fieldhouse in Indianapolis, Sunday, March 21, 2021. (AP Photo/Michael Conroy)

FAYETTEVILLE -- The list of 99 college basketball programs that had made it to the NCAA Tournament Sweet 16 during the University of Arkansas' drought from 1997-2020 included Kent State in 2002, Alabama-Birmingham in 2004, Missouri in 2009 and Nevada in 2018.

On the third try by an Arkansas athletic director to hire one of those coaches, the Razorbacks finally hit on the guy who could duplicate the Sweet 16 success he had enjoyed previously.

Eric Musselman, who led Nevada on its Sweet 16 run in 2018, now has done the same thing at Arkansas.

In Musselman's second season, Arkansas has beaten Colgate and Texas Tech to advance to the Sweet 16 for the first time since Nolan Richardson led the Razorbacks there in 1996.

"If your coach is two years in at your program and you get to the Sweet 16 -- and you haven't been there for 25 years -- you feel really good about your hire," Arkansas Athletic Director Hunter Yurachek said. "Things have just fallen into place with Eric as our coach."

Yurachek said it was gratifying to see how Musselman and his staff and players celebrated on the Hinkle Fieldhouse court after the Razorbacks beat Texas Tech 68-66 on Sunday night, but he also was touched by the reaction of fans who attended the game.

"I looked around at our fans, and a lot of them had tears running down their faces, because seeing the program get back to the Sweet 16 meant so much to them," Yurachek said. "That was really rewarding."

After the season, Yurachek will be rewarding Musselman as well. He said that when the season ends, he will talk with Musselman about a new contract.

"Our season hasn't ended yet fortunately, so Eric and I haven't sat down yet and had that initial conversation," Yurachek said. "But with the success of our team, he for sure has done what he needs to do for me and him to sit down and talk about what a contract looks like for him moving forward.

"Eric and I talk every single day. I talk to Eric's agent [Jordan Bazant] at least once a week. We're all on the same page, and I feel very comfortable with what that page is."

Yurachek said he doesn't believe openings at Indiana or other schools will affect his contract talks with Musselman and Bazant.

"A lot of times when other jobs open up, what you see in the media are agents planting things to get their coaches some leverage because they maybe haven't been winning as much as they should have," Yurachek said. "As Eric's agent and I talk, Eric's got all the leverage he needs with me because we finished second in the SEC and we're in the Sweet 16.

"Eric doesn't need the leverage of an opening at Indiana to get the agreement that he needs here at the University of Arkansas. He's got plenty of leverage by winning basketball games."

Heath's Razorbacks made back-to-back NCAA Tournament appearances in 2006-07, but he was fired because they went 0-2 with first-round losses to Bucknell and Southern California.

Coach Mike Anderson led Alabama-Birmingham to the Sweet 16 in 2004. Two seasons after Anderson led Missouri to an Elite Eight appearance in 2009, he returned to Arkansas, where he was Richardson's assistant coach for 17 seasons. Athletic Director Jeff Long hired Anderson to replace John Pelphrey.

Anderson had a 169-102 record in eight seasons at Arkansas, but the Razorbacks made just three NCAA Tournament appearances in which they went 2-3 and couldn't get past the second round.

Yurachek fired Anderson after the 2018-19 season -- when the Razorbacks went 18-16 and played in the NIT -- and hired Musselman, who had a 110-34 record in four seaosns at Nevada and led the Wolf Pack to three consecutive NCAA Tournament appearances from 2017-19,

Musselman's five-year contract at Arkansas calls for annual compensation of $2.5 million, which ranks 49th nationally and 13th among the SEC's 13 coaches at public universities, according to a database of college basketball coaches' salaries compiled by USA Today. The salary of Vanderbilt Coach Jerry Stackhouse wasn't included in the USA Today data because he works at a private university, which is exempt from open-records requests.

By reaching the NCAA Tournament, Musselman's current contract automatically has been extended by one year through 2025. By leading the Razorbacks to the Sweet 16, Musselman will receive a $250,000 bonus. Advancing to the Final Four would increase the bonus to $350,000, and winning the national championship would make it $500,000.

Yurachek said making the decision to replace Anderson wasn't easy and added to the pressure to make sure he hired a coach who could take Arkansas to a higher level.

"I let a coach go in Mike Anderson that had never had a losing season, not only at the University of Arkansas, but as a head coach anywhere," Yurachek said. "He had been successful, but as you talk about that drought of getting back to the Sweet 16 and how many teams other than the Arkansas Razorbacks had been to the Sweet 16 since 1996, I just felt that we needed to make a change and go in a different direction.

"I felt we needed to create some new energy and buzz about our program."

Yurachek said he's glad to see Anderson having success as St. John's coach -- he was the Big East coach of the year this season when the Red Storm went 16-11 -- but that he has no doubt Musselman was the right hire for Arkansas.

"You've got to have a lot go your way to get to the Sweet 16 as a basketball program, and it was such a huge hurdle for us to clear when we hadn't done it in so long," Yurachek said. "But I know Eric and his team don't want this to be the last hurdle they clear this season." 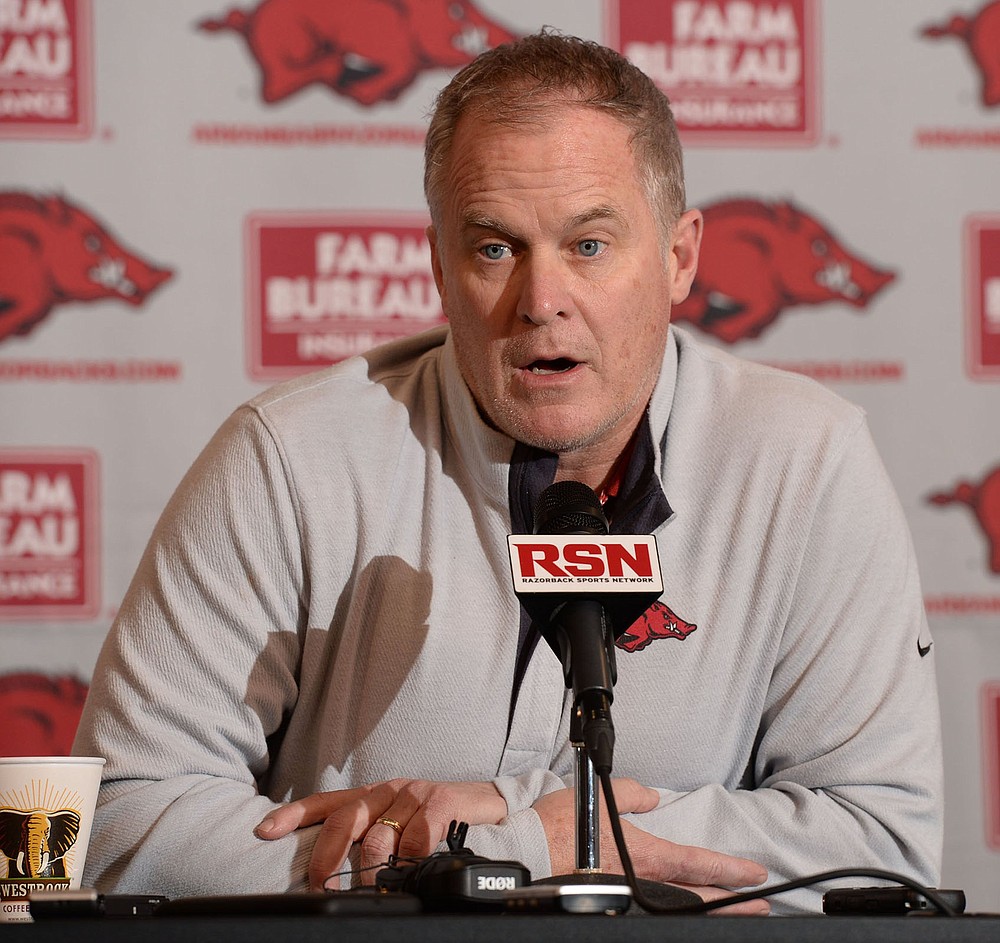 Arkansas Athletic Director Hunter Yurachek said he is in constant contact with Coach Eric Musselman, even though they haven’t been able to discuss a contract extension. “Eric and I talk every single day. I talk to Eric’s agent at least once a week. We’re all on the same page, and I feel very comfortable with what that page is,” Yurachek said. (NWA Democrat-Gazette file photo/Andy Shupe)
ADVERTISEMENT