Hogs break down the 'turning point' 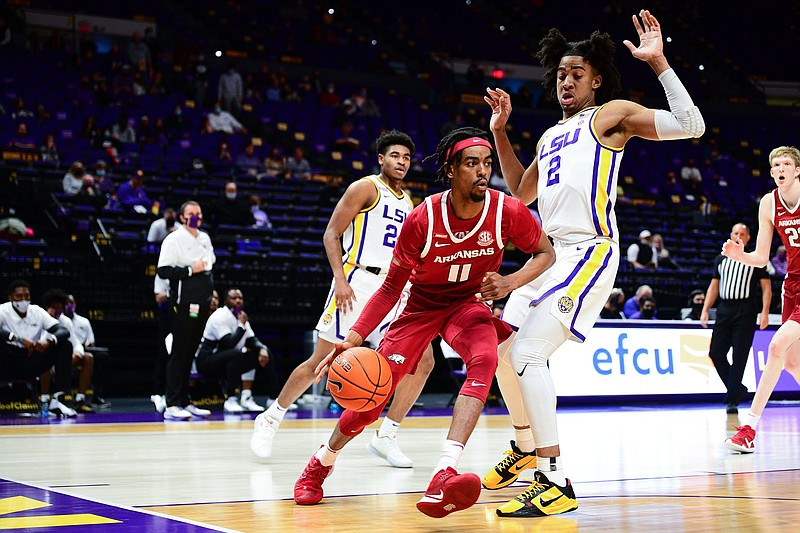 Arkansas guard Jalen Tate and the Razorbacks were put through a grueling practice by Coach Eric Musselman the day after a blowout loss at LSU in January. Tate said the workout helped bring the Hogs together. “As a team, you have to make a decision,” he said. “You have to come together or you’re going to just separate and let the whole season go to waste.” (Photo courtesy of the SEC)

It was the day after the University of Arkansas had lost at LSU 92-76 -- after trailing by 31 points in the first half -- and two days before the Razorbacks were scheduled to go back on the road to play Alabama.

Instead of having a light practice to let the players recover from the LSU game and stress mental preparation for the Crimson Tide, Arkansas Coach Eric Musselman put the players through what he called the longest and toughest practice in his two seasons at Arkansas.

"I think some of the assistant coaches might have thought we were overdoing it," Musselman said. "And I said, 'I don't care if we win the next game. We have to set a standard and a tone for who we are moving forward.' "

The Razorbacks wore weight vests in rebounding drills, held towels above their heads in defensive sliding drills and had bricks in their hands while closing out on three-point shooters.

[Video not showing up above? Click here to watch » https://www.youtube.com/watch?v=7fjaQYL6Zcg]

"That was definitely one of the hardest practices I've ever endured," said Arkansas senior guard Jalen Tate, a graduate transfer from Northern Kentucky. "Really, it tested us."

"It wasn't punishment," Musselman said. "But everyone had to understand that we weren't going to accept how we played at LSU.

"Looking back on it now, I think that practice was the turning point of our season."

As Musselman expected, the long, physical practice took a lot out of his team. The Razorbacks lost at Alabama 90-59, falling to 2-4 in SEC play.

The Razorbacks responded to the LSU and Alabama losses by going on a 12-game SEC winning streak -- matching the 1994 national championship Arkansas team -- and earned a No. 3 seed in the NCAA Tournament.

Arkansas' success has continued in Indianapolis with the Razorbacks beating Colgate 85-68 and Texas Tech 68-66 to advance to the Sweet 16 for the first time since 1996.

[Video not showing up above? Click here to watch » https://www.youtube.com/watch?v=WTGNrhZ7CKA]

It's not an overstatement that Arkansas likely still wouldn't be playing if not for Musselman's decision to have the type of practice he did after the loss at LSU.

"All I know is that we didn't want to do that again," Razorbacks junior guard JD Notae said. "I mean, we bought into what Coach was telling us, and that turned our season around."

Tate said the challenging practice helped bring the players together.

"As a team, you have to make a decision," he said. "You have to come together or you're going to just separate and let the whole season go to waste.

"I think we did a great job of coming together and staying together, and gelling even more and being there for one another even more."

Arkansas began its SEC winning streak by beating Auburn 75-73 in Walton Arena after falling behind by 19 points in the first half.

"I think that the team, it made us stronger as one, as a unit," Tate said of Musselman's old-school approach. "And we knew as players we had to take it upon our own shoulders and into our own hands to really go out there every single night and give it everything we've got.

"Because we don't have too many more of these games left. We didn't want to be embarrassed anymore."

Musselman said he especially wanted to make sure Arkansas' freshmen understood that how the team played at LSU was unacceptable.

"I walked in there and saw the weight vests and I was like, 'Oh my goodness,' " he said. "I didn't know what was going to happen.

"Looking back at it, I'm pretty sure going into the games after that, all of us were like, 'Yeah, we can't let that happen anymore.' So we had a different mindset and we were ready to play."

Before Arkansas beat Alabama -- also a Sweet 16 team and the SEC regular-season and tournament champion -- 81-66 in a rematch in Walton Arena on Feb. 24, Tide Coach Nate Oats said he could see in film study the Razorbacks were playing harder.

"Maybe their legs weren't quick under them as much as they typically would have been," Oats said of the first Alabama-Arkansas game. "But Coach Musselman was trying to make a point.

Musselman said he had similar practices at Nevada, but that was with a veteran team. Arkansas has nine newcomers this season.

"It wasn't risky when I did that at Nevada after three or four years because we all knew each other inside and out," Musselman said. "But I think this team really decided to fully buy in after that practice.

"There was nobody with half a foot out. It was all in at that point."