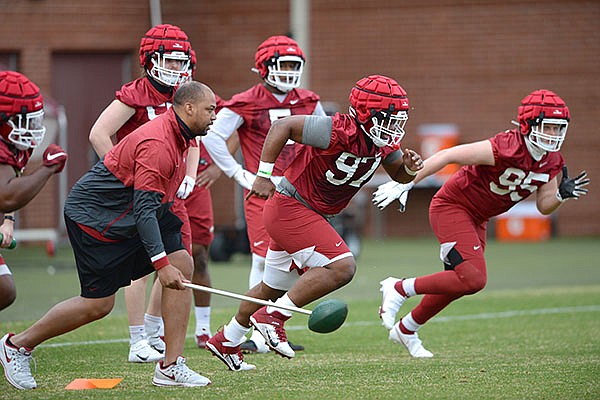 “He’s cool. He’s a funny dude,” Walker said. "I feel like when he grows relationships he grows as a friend. Not too many coaches on the first call makes jokes and all that.”

Walker, 6-7, 330 pounds, of Detroit Cass Tech, is closing in on 30 offers from schools such as Michigan, Michigan State, LSU, Florida, Georgia, Iowa, State, Ole Miss and other programs.

“It’s good to get an offer from a big school, especially one like Arkansas,” said Walker, who’s looking to major in sports management. “They’ve brought out a ton of D-linemen and that’s what they want me as, so I’m very excited.”

He recorded 40 tackles, 15 tackles for loss, 4 sacks and 2 forced fumbles as a junior. Walker bench pressed 345 pounds prior to last season and squatted 405.

Walker is looking to make his college decision about mid-season or after. Before he announces his college designation, he’ll have to narrow his large list of schools.