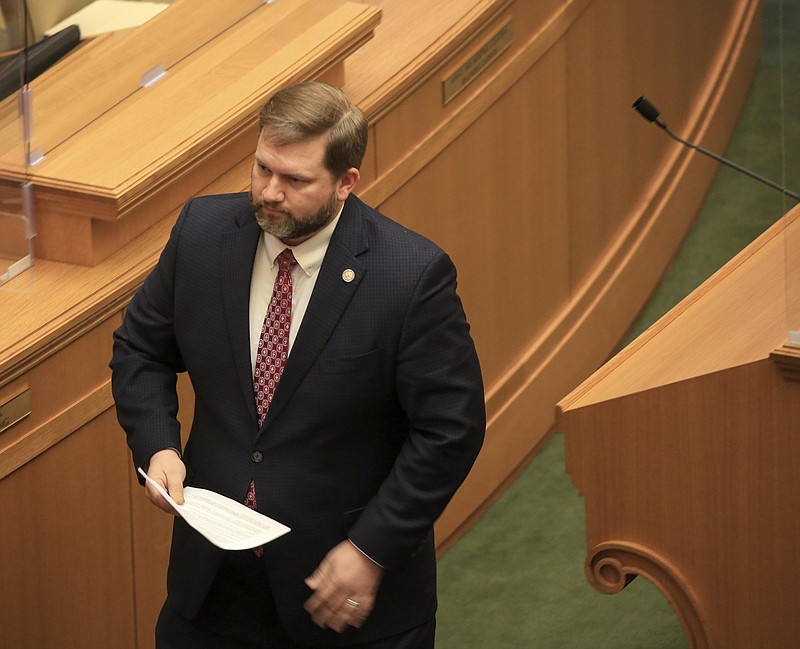 The Arkansas House voted Monday to bar many public employees, including teachers, from participating in collective bargaining through a union.

The mostly party-line vote to advance the legislation, Senate Bill 341, followed minimal debate on the House floor, where one member spoke against it. In previous committee meetings, the bill drew opposition from both Democrats and union leaders, but it was easily passed by Republicans in control of the Legislature.

The 62-22 vote sent the bill back to the Senate for concurrence on amendments.

Gov. Asa Hutchinson said through a spokeswoman Monday that he would sign the bill in its current form if it reaches his desk.

"This is specifically directed toward public employees who would try to physically impede, like I said, the activity or operations of a public employer and through that process strike, if they're part of a union," said Rep. Jim Dotson, R-Bentonville, who presented the bill to the House.

During a hearing on SB341 last week, opponents charged that it was an unnecessary attempt to interfere with organizing efforts in a state with low rates of union membership. The executive director of the Arkansas Education Association, Tracey-Ann Nelson, said it "directly targets our educators."

Other than school teachers, the bill would apply to university employees, state workers and court employees. It would not apply to employees of cities and counties, and it exempts police officers, firefighters and certain transit workers.

Public employers covered by the law would be required to fire any workers who go on strike or participate in a picket line.

"I'm just wondering what particular issue this bill addresses, and why certain groups were carved out and others weren't," McCullough said.

In a statement released by the Arkansas Education Association following the House vote, Nelson said: "Students, and student-centered issues, are at the heart of our advocacy efforts. At the end of the day, our calling is to support students and utilize our professional expertise to help students learn and grow. It's disappointing a majority of the legislature felt educators alone do not deserve the right to negotiate better teaching and learning conditions."

Michele Linch, executive director of the Arkansas State Teachers Association, could not be reached for comment Monday.