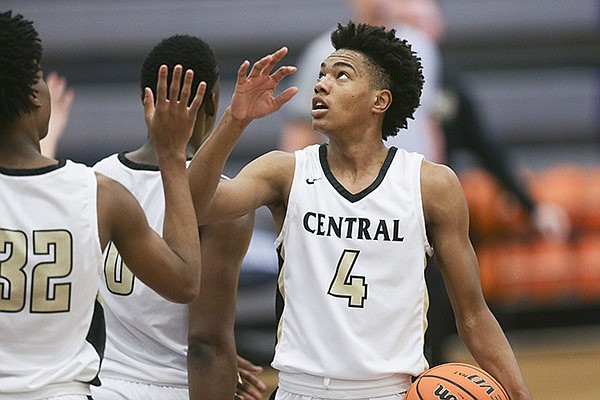 Little Rock Central guard Bryson Warren (4) is shown during the Class 6A state playoffs on Saturday, March 13, 2021, in Fayetteville.

The Razorbacks advanced to the Sweet 16 for the first time since 1996.

“Great game. The Razorbacks are on a roll,” Warren said.

Freshmen lead in win over Tech

“These guys are playing with a chip on their shoulder,” Dunning said.

“I think that it was a very fast-paced game and Arkansas was playing really well down the stretch in the second half," Nunez said. "Then Tech’s defense sped them up, but they kept the lead and played with poise toward the end."

“The game was entertaining and fun to watch,” Blocker said. “Team effort. It was exciting to see the freshmen (Moses Moody, Davonte Davis and Jaylin Williams) show up big to help them win. I think it was a big win for the Razorbacks to advance to the Sweet 16.”

“Great game,” he said. “Arkansas will be a very tough team to beat moving forward.”

“I felt like they played pretty good," Smith said. "(Arkansas coach Eric Musselman) keeps his guys going and always going to have them prepared. My Twitter is going crazy.”

Joseph Pinion, 6-6, 180, of Morrilton, committed to the Razorbacks over 13 other scholarship offers from Kansas, Baylor, Oklahoma, TCU, Ole Miss, Tulsa, DePaul and others in October.

"The team is playing fantastic right now and I’m excited to see how far they go in the tourney,” Pinion said.

“They played great even when the team went on an 11-0 (run), they kept the same energy and the same mentality,” Ford said. “Everybody on the team wanted to win. The team is great.”

“That’s a great accomplishment, especially as coach Muss is a relatively newer coach for the organization,” said Moore, an ESPN 4-star prospect. “It was a great game. Hard fought. We played well as a team.”