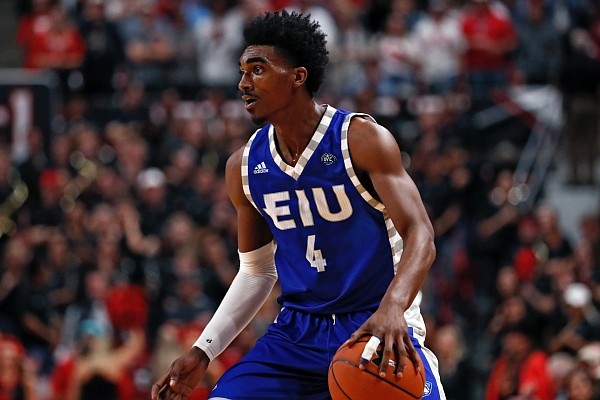 Eastern Illinois' Marvin Johnson (4) dribbles the ball down the court during the first half of an NCAA college basketball game against Texas Tech, Tuesday, Nov. 5, 2019, in Lubbock, Texas. (AP Photo/Brad Tollefson)

Eastern Illinois graduate transfer and combo guard Marvin Johnson announced Arkansas as one of his top four schools on Saturday.

Johnson, 6-6, 190 pounds, has Arkansas, Drake, Mississippi State and New Mexico State in his final list of schools. Florida, Texas A&M, TCU and other programs reportedly reached out when he entered the NCAA transfer portal on March 11.

JUCO Recruiting lists him as one of the top six guard transfers in the portal.

Johnson averaged 15.3 points, 5.2 rebounds, 4.6 assists and 1.9 steals per game this season for the Panthers and was named first team All-Ohio Valley Conference.

The NCAA’s Division I Council voted in the fall to grant winter-sport athletes an extra year of eligibility because of the covid-19 pandemic.

He played two seasons at Coffeyville (Kan.) Community College, where he was rated the No. 25 junior college prospect in the nation for he 2019 class by JUCO Recruiting prior to arriving at Eastern Illinois.

Johnson averaged 14.8 points, 4.6 rebounds and 2.9 assists per game as a sophomore, and 13.8 points and 4.2 rebounds as a freshman while leading Red Ravens to the NJCAA playoffs both seasons.

He scored 22.2 points per game at Edmond North High School in Oklahoma as a senior and led the team to Oklahoma Class 6A State title.