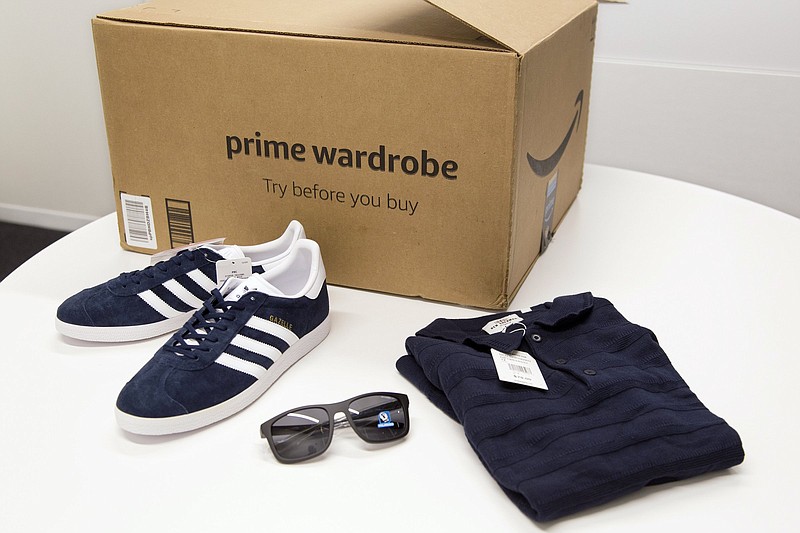 Items ordered through an Amazon service are displayed in New York in 2018. Walmart Inc. has fallen to second place in U.S. apparel sales to rival Amazon, according a new report from Wells Fargo analysts. (AP)

Walmart Inc. has fallen to second place in U.S. apparel sales and Amazon.com nabbed the top spot, according a new report from Wells Fargo analysts.

The e-commerce giant eclipsed the Bentonville-based retailer in sales of apparel and footwear as well as in market share in those categories, four analysts said in the report published Wednesday. They attribute Amazon's growth to the covid-19 pandemic, which largely kept shoppers out of stores.

Amazon's U.S. sales of apparel and footwear grew more than 15% in 2020, exceeding $41 billion, Wells Fargo said. The report pegged that amount as 20% to 25% higher than Walmart's 2020 sales in those categories.

The retailer also doesn't release its category sales figures, so it's unclear how Wells Fargo was able to make the comparisons with Amazon.

Sucharita Kodali, vice president and principal analyst with Forrester Research, suggested Wells Fargo may be trying to justify its "buy" rating on Amazon.

Kodali said it's plausible that Amazon's numbers are as high as stated in the report, but notes that Walmart also grew a lot in the past year. Still, she said she questions the report's numbers on online growth in apparel, which seem very high for 2020.

Forrester's data is "a little softer," she said.

"Our mid-2020 survey of 4,000 U.S. consumers said that 43% purchased apparel, footwear or accessories from Amazon in the last 12 months," which includes the Christmas shopping season, Kodali said.

"I am also seeing anecdotally more of the most desirable apparel and footwear brands refusing to supply to Amazon," she said. "This could impact where people choose to buy."

"Selection is a driver of shopping on Amazon but if that disappears, people will just go elsewhere," Kodali said.

In fact, Wells Fargo touches on this, noting as an example Nike's relationship with Amazon. The sports brand in 2017 started shipping a curated assortment of lower-priced styles to Amazon "in an attempt to better control their online distribution," despite Nike being one of the largest vendors in the world.

Two years later, Nike cut ties with Amazon, "suggesting that the company is concerned more about brand presentation than consumer reach," according to the report.

Meanwhile, Walmart has been moving aggressively to broaden its clothing assortment and quality.

On Tuesday, Walmart said its will work with designer-to-the-stars Brandon Maxwell, who will oversee four seasonal collections for the retailer's premium brands Free Assembly and Scoop. Maxwell's first full collection will debut in spring 2022.

Walmart's other premium brands are Sofia Jeans by Sofia Vergara and plus-sized brand Eloquii. However, it still carries a large number of private brands such as Time and Tru and Terra & Sky.

And at Walmart's annual meeting with investors last month, Walmart Chief Executive Officer Doug McMillon said the company expects its e-commerce business to continue growing at a rapid pace. Walmart expects its online sales globally to top $100 billion over the next couple of years.