Center to focus on workforce housing in Northwest Arkansas 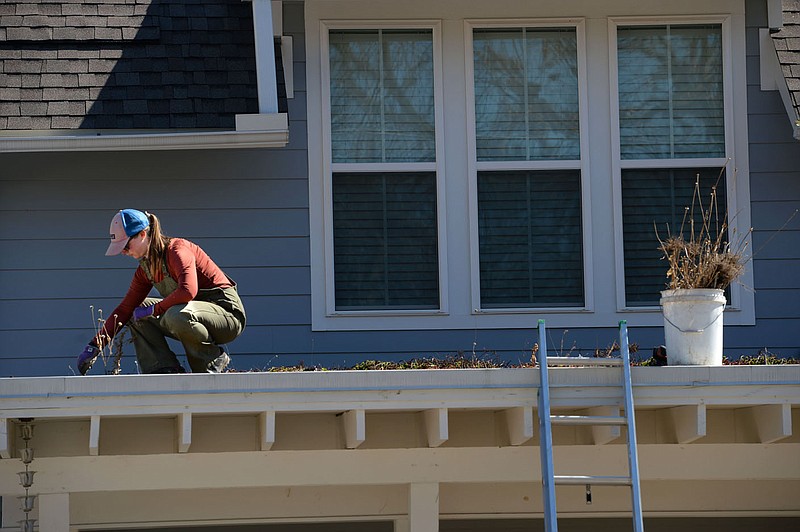 Lee Porter, owner and operator of Ozark Green Roofs in Fayetteville, tends to plants on a green roof March 4, atop the front porch of a house on College Avenue in Fayetteville. The Northwest Arkansas Council and Walton Family Foundation are collaborating to create a center on workforce housing in the region (File photo/NWA Democrat-Gazette/Andy Shupe)

A center intended to develop strategies to promote more attainable housing in the region is becoming part the Northwest Arkansas Council with backing from the Walton Family Foundation.

The center will collaborate with regional organizations, nonprofits and cities to address housing needs and priorities in Northwest Arkansas, according to a council news release. The goal is to create a variety of housing options and mixed-income neighborhoods for working-class families.

The center will promote housing close to employment centers, amenities and services such as public transit and trails.

"Rapid population growth is predicted to continue in the region for at least the next 25 years," the release states. "Homebuilders aren't expected to produce enough housing or provide the kind of housing affordability the region's workforce will need to support that growth."

Partner organizations include the Arkansas Coalition of Marshallese, Community Development Corporation of Bentonville/Bella Vista, Excellerate Foundation and Partners for Better Housing, according to the release.

The council is searching nationally for an executive director to lead the effort.

The foundation's 2019 Our Housing Future study projects more than 80,000 families will collectively move to Fayetteville, Springdale, Rogers and Bentonville by 2040. The region needs to build about 2,900 units per year to keep up, but the four cities averaged 1,400 units annually from 2010 to 2016, according to the study.

The latest Arvest Bank Skyline Report published this month, from the University of Arkansas Center for Business and Economic Research and Arvest Bank, showed record-breaking home sales prices in Washington and Benton counties, paired with a low inventory of homes available to buy.

"Many Northwest Arkansas residents choose to live away from key workforce centers within cities due to lower housing costs in outlying areas," the release states. "However, savings on housing costs are offset by higher transportation costs and increased commute time."

To learn more about the effort to create workforce housing in Northwest Arkansas, go to: