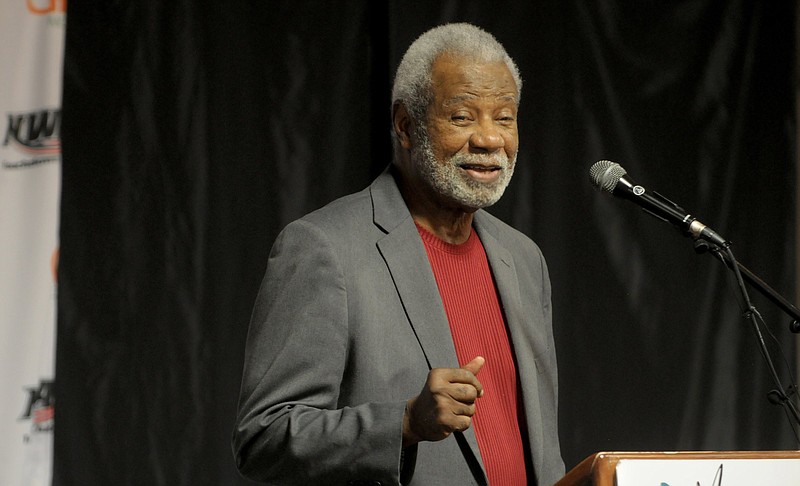 Leroy Pond Drive will be renamed as Nolan Richardson Drive. The street runs along the south side of Bud Walton Arena on the UA campus.

As part of the proposal approved Tuesday, Government Avenue will be renamed as Lt. Col. Leroy Pond Avenue. Pond was a Fayetteville resident and UA graduate who died in 1945 from combat wounds suffered while serving in the Army during World War II. The Fayetteville National Cemetery is on Government Avenue.

The resolution passed without debate. Eight people spoke in favor of passing the resolution during public comment.

"The street would be a symbol of just a testimony to how Fayetteville and Northwest Arkansas is progressive," said Oliver Sims, a Dallas resident who identified himself as a 1984 UA graduate.

"Gestures and action like this honoring Leroy Pond -- who is a legend in his own right -- in a better location, and renaming the street that runs alongside Bud Walton Arena is a move that will pay long-term dividends for the city of Fayetteville, the University of Arkansas, for the economy of the region ... there are so many reciprocal benefits for this move that would honor two outstanding men."

Ward 1 Councilman D'Andre Jones sponsored the resolution on behalf of the UA Black Alumni Society, which recommended the name change in August.

"Nolan's commitment to improving the lives of the marginalized here in Fayetteville through the Yvonne Richardson Community Center ... it's a great opportunity for us to partner with the Black Alumni Society and the African-American community, and celebrate the accomplishments of one of Fayetteville's oldest and most notable citizens," Jones said last week.

Jones said he spoke with Richardson about the street proposal two weeks ago. Richardson never moved away from Fayetteville after he was fired as the Razorbacks' coach in 2002.

"He expressed his gratitude and said he would be totally grateful for the consideration," Jones said.

Richardson is the only coach to win an NCAA basketball championship at Arkansas, which he did in 1994. Richardson won a program-record 389 games from 1986-2002 and led the Razorbacks to the Final Four three times.

In 2014, Richardson was inducted into the Naismith Memorial Basketball Hall of Fame, the highest individual career achievement in the sport.

The floor at Bud Walton Arena was dedicated as Nolan Richardson Court in 2019. There is also a banner with Richardson's name hanging inside the arena, and a museum area highlights several of his accomplishments. Bud Walton Arena opened in the fall of 1993 while Richardson was the Razorbacks' coach.

Jones asked for a vote on the street proposal this week to coincide with the start of the NCAA Tournament. The Razorbacks are scheduled to play Colgate in the first round of the tournament Friday in Indianapolis.

Pond participated in D-Day and received numerous medals for his service, including the Silver Star and Purple Heart.

Pond was wounded in Germany in December 1944 and died in an English hospital in January 1945.

"After the war, the University of Arkansas constructed a small camp, near where Bud Walton Arena is now located, to house WWII veterans who would become students," UA spokesman Mark Rushing said in an email. "The camp was named after Pond and later, the street was named after him."

Jones' initial proposal called for the renaming of Meadow Street, one block north of Leroy Pond Drive on the UA campus, but Jones said UA leadership expressed concern over that proposal.

Meadow Street is managed by the UA, not the city.

The story was updated to correct a name.