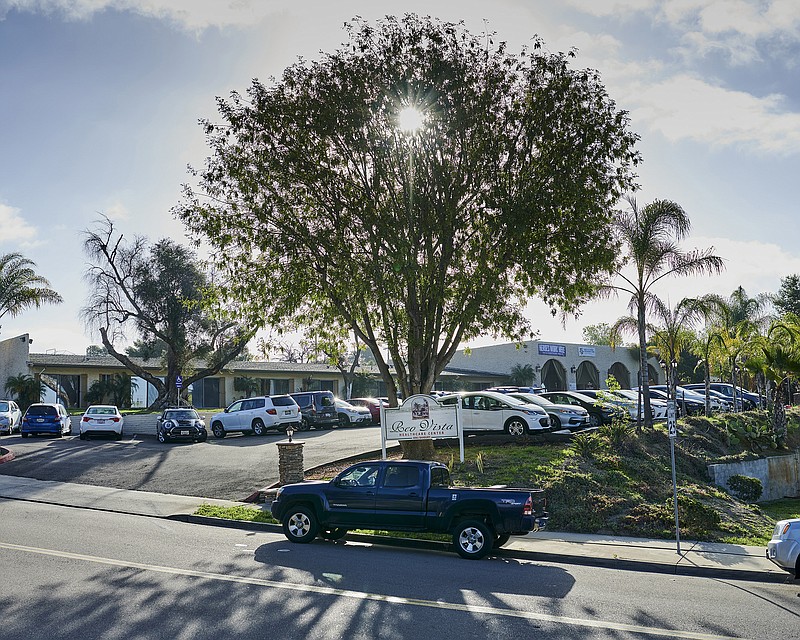 The Reo Vista Healthcare Center in San Diego kept its perfect rating even though health inspectors concluded that a nursing assistant raped a resident, with the report classifying the attack as a “category F” violation, a low-level problem that caused potential, not actual, harm. (The New York Times/John Francis Peters)

Twelve years ago, the U.S. government introduced a powerful tool to help people make a wrenching decision: which nursing home to choose for loved ones at their most vulnerable. Using a simple star rating -- one being the worst, five the best -- the system promised to distill reams of information and transform an emotional process into one based on objective, government-blessed metrics.

The star system quickly became ubiquitous, a popular way for consumers to educate themselves and for nursing homes to attract new customers. During the coronavirus pandemic, with many locked-down homes unavailable for prospective residents or their families to see firsthand, the ratings seemed indispensable.

But a New York Times investigation, based on analysis of the data that powers the ratings program, found that despite years of warnings, the system provided a badly distorted picture of the quality of care at the nation's nursing homes. Many facilities relied on sleight-of-hand maneuvers to improve their ratings and hide shortcomings that contributed to the damage when the pandemic struck.

More than 130,000 nursing-home residents have died of covid-19, and the Times' analysis found that people at five-star facilities were roughly as likely to die of the disease as those at one-star homes.

The ratings program, run by the U.S. Centers for Medicare and Medicaid Services, relies on a mix of self-reported data from more than 15,000 nursing homes and on-site examinations by state health inspectors. Nursing homes receive scores based on how they fare in those inspections; how much time nurses spend with residents; and the quality of care that residents receive. Those three grades are then combined into an overarching star rating for each nursing home.

To evaluate the ratings' reliability, the Times built a database to analyze millions of payroll records to determine how much hands-on care nursing homes provide residents, combed through 373,000 reports by state inspectors and examined financial statements submitted to the government by more than 10,000 nursing homes.

The Times obtained access to portions of the ratings data that aren't publicly available from academics who had research agreements with the Centers for Medicare and Medicaid Services.

In its investigation, the Times found facilities had submitted incorrect information to the Centers for Medicare and Medicaid Services on safety and cleanliness, as well as inflated staffing levels.

Data also suggest that at least some nursing homes know in advance about what are supposed to be surprise inspections. Health inspectors still routinely found problems with abuse and neglect at five-star facilities, yet they rarely deemed the infractions serious enough to merit lower ratings.

"They were working to improve their ratings, but not their quality," said Charlene Harrington, a member of a board that advises the Centers for Medicare and Medicaid Services on the ratings system.

The star system was introduced in 2008. Private equity firms were buying many nursing homes, and lawmakers worried that the quality of care would deteriorate. Today, for-profit companies own about 70% of all U.S. nursing homes.

When the system was first rolled out, elder-care groups applauded it for providing an easy-to-understand look inside nursing homes. As it gained popularity, it became a powerful determinant of fortunes in an industry with thin profit margins.

Five-star facilities earned about $2,000 in profits per bed in 2019, according to a Times analysis of nursing homes' financial statements. Those with three or four stars earned about $1,000 per bed. Poorly rated homes were typically not profitable.

But within months of the star system's launch, members of a Medicare advisory board cautioned federal officials that nursing homes were incentivized to adjust their numbers, according to board members and former regulators. Board members, including Harrington, a professor emeritus at the nursing school of the University of California, San Francisco, called for more auditing of the self-reported data.

Warnings about self-reported data have been borne out by researchers.

A paper last year by Integra Med Analytics, a data firm started by a University of Texas professor, compared hospital admissions data with the information nursing homes submitted to Medicare. The paper concluded that half of nursing homes underreported potentially deadly pressure ulcers, or bed sores, by at least 50%.

In 2019, the inspector general for the U.S. Department of Health and Human Services found that nursing homes reported only 16% of incidents in which residents were hospitalized for "potential abuse and neglect."

And researchers at the University of Chicago concluded that, from 2011 to 2015, nursing homes didn't tell Medicare about 40% of residents who were hospitalized after serious falls.

Menorah Park, a facility in Beachwood, Ohio, that had five stars, disclosed only 11 of 47 serious falls.

In 2018, the Centers for Medicare and Medicaid Services improved the way it collected staffing data. Instead of asking nursing homes to report the average number of hours nurses and aides spent with residents, the agency required homes to submit payroll records that logged their daily hours. The hope was that such data would be harder to manipulate.

With the payroll records, nursing homes' average staffing numbers plummeted, according to the Times analysis. That suggested that homes had previously been inflating their nursing data.

Trinity Homes, a facility with 230 beds in Minot, N.D., received five stars for its staffing levels. But residents repeatedly complained to inspectors that the place was short-staffed. In 2019, half of Trinity's nursing hours came from administrators.

Karim Tripodina, a spokeswoman for Trinity, said the home complies with the Centers for Medicare and Medicaid Services requirements and has "ample staff to care for our residents."

The rating system puts the greatest weight on in-person inspections; they are the starting point for the final star rating.

But the exams do little to penalize homes with serious problems. At nearly 1,200 homes with five stars, inspectors over a three-year period identified at least one problem involving potential patient abuse, such as violence committed by staff or the failure to investigate injuries, the Times found.

In 2019, health inspectors concluded that a nursing assistant at the Reo Vista home in San Diego, Calif., had followed a resident who uses a wheelchair to her room. The employee pushed her on the bed and raped her, according to the inspection report.

The report classified the attack as a "category F" violation, a low-level problem that caused potential, not actual, harm.

That designation helped Reo Vista hold onto its perfect rating, which it trumpets on its website.

"This former staff member's actions do not reflect the values we hold at our facility that our overall five-star rating more accurately reflects," said William Fredricksen, Reo Vista's administrator.

At 40 other five-star nursing homes, inspectors similarly determined that sexual abuse did not constitute actual harm or put residents in "immediate jeopardy," the Times found.

In theory, health inspections can occur at any time, without notice. But the Times found that in 2019 about 70% of nursing homes increased their staff on the days that inspectors visited.

On average, the homes added 25 hours of staff time -- a roughly 8% increase -- to their rosters on the day of the inspection. For more than 800 facilities, inspection day was the best-staffed day of the year.

The odds of that happening randomly are virtually zero, suggesting that many homes are able to anticipate their inspection dates.

"Every home seemed to get a tip and would roll out the red carpet," said Tony Cisney, a former inspector in Kentucky.

The Times found that there was little if any correlation between star ratings and how homes fared during the pandemic. A facility's location, the infection rate of the surrounding community and the race of nursing home residents all were predictors of whether a nursing home would suffer an outbreak. The star ratings didn't matter.

At Fulton Commons Care in East Meadow, N.Y., its five stars largely stemmed from its self-reported data, which researchers have found at times to be incorrect. Fulton Commons officials did not respond to requests for comment.

One resident, Stasia Kochanowska, died from covid-19 on April 10. That same day, another resident, 88-year-old Adele Guyear, spoke to her daughter, Pamela Martin. Guyear said her roommate had died from the virus. So had two women down the hall. And, Guyear told her daughter, she had a bad cough.

Martin initially had been comforted by the home's five-star rating. Now, hearing from her mother, Martin began to panic. She said she called the home and demanded that Guyear be sent to a hospital. There, she tested positive for covid-19. Her mother survived, but she can't breathe without supplemental oxygen, Martin said.

On May 15, health inspectors cited Fulton Commons for having a deficient program for preventing and controlling infections. The Centers for Medicare and Medicaid Services classified the problem as causing "minimal harm or the potential for actual harm." The facility kept its five stars.

"Knowing what I know now," Martin said, "you'd have to be crazy to give this place a five-star rating."