Jasper in line to get the keys to theater 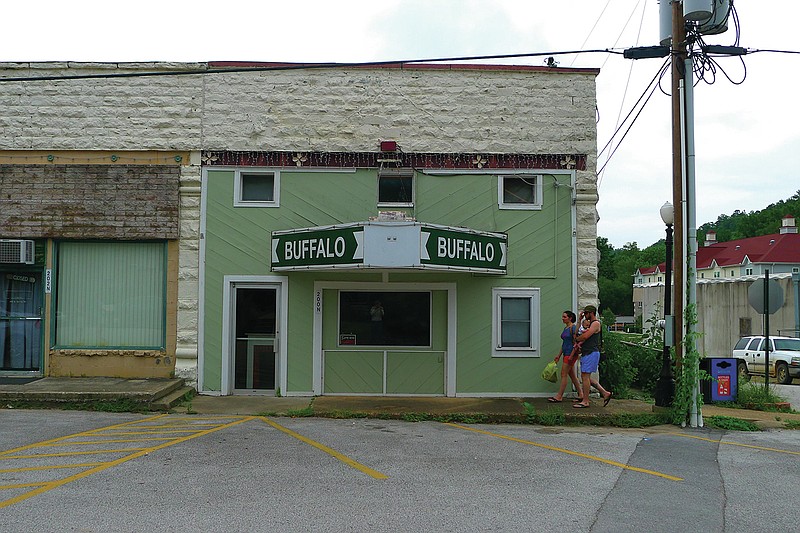 Arkansas Democrat-Gazette/BILL BOWDEN - 08/04/2015 - The Buffalo Theater event center in Jasper closed Monday (Aug. 3) after the nonprofit organization that had it since 2012 gave the building back to Bank of the Ozarks in lieu of foreclosure. The building served as a movie theater from 1948 until the late 1970s.

A plan is in the works to give the historic Buffalo Theater building to the city of Jasper.

Don Nelms, who owns the century-old building on the downtown Jasper square, said he will donate it to the city as long as conditions of an agreement are met.

That agreement has yet to be written.

"I'm going to do everything I can to see that Jasper ends up with this building," Nelms said. "We want it to be nice, and we want it to be an asset to the community."

Nelms said he was contacted by Jasper Mayor Jan Larson asking if he would sell the building. Nelms said he decided to give it to the city instead.

Larson said the City Council voted at its last meeting to accept the building. She's not sure yet exactly how the building will be used, but the city needs a visitors center with public restrooms.

"It's going to take some work," she said. "Basically, the building is in good shape, but I'm sure the systems are old."

Larson said it was renovated at one time to serve as a bakery, so it no longer has theater seats or a sloped floor.

"It's just kind of a shell at this point," she said.

Larson said she has spoken with a representative of the Arkansas Historic Preservation Program about grants to rehabilitate the building.

Located along the banks of the Little Buffalo River in the Ozark Mountains, Jasper, population 466, is the Newton County seat.

Nelms lives in Jasper and Fayetteville, which is 75 miles to the west. He is an owner of two Fayetteville businesses: Adventure Subaru and Sunrise Guitars.

The building was previously occupied by a nonprofit organization, Buffalo Theater Inc., which ran it as a performing arts development and events center. Unable to make their mortgage payments, the organization gave the building back to the Bank of the Ozarks in lieu of foreclosure in 2015.

Nelms said he didn't have any grand plans for the building when he bought it. He thought he might eventually put something in it. Nelms, a nature photographer, has a photo gallery in another downtown Jasper building.

"The reason I did it was to kind of save a space," Nelms said of the Buffalo Theater building. "At least I would be in control of what happened to it."

Nelms said he allowed a couple of organizations to use the building, but for the most part, it has remained vacant since he bought it.

The building is part of the Jasper Commercial Historic District, which was added to the National Register of Historic Places in 2010.

The Buffalo Theater building was constructed in 1916 and housed a mercantile, according to the Arkansas Historic Preservation Program.

"The walls of the building are locally-quarried, rough-cut limestone blocks," according to a Preservation Program "Walks Through History" tour of Jasper. "In 1941 Jimmy Gilbert opened the Gilbert Theater in the building, and in 1952 Don Jones changed the name to Buffalo Theater. About 1960 Roy Raulston purchased the theater, and the theater closed in 1989."

The building housed Spice O' Life Bakery for about 15 years after that and was vacant for several years before being purchased by Buffalo Theater Inc. in 2012.

Larson said it still has the movie marquee awning out front.