HIGH PROFILE: Heather Anne Larkin meets the needs of communities across the state

With degrees in economics and law, Heather Larkin meets the needs of communities across the state. by Ron Wolfe | March 14, 2021 at 8:38 a.m. 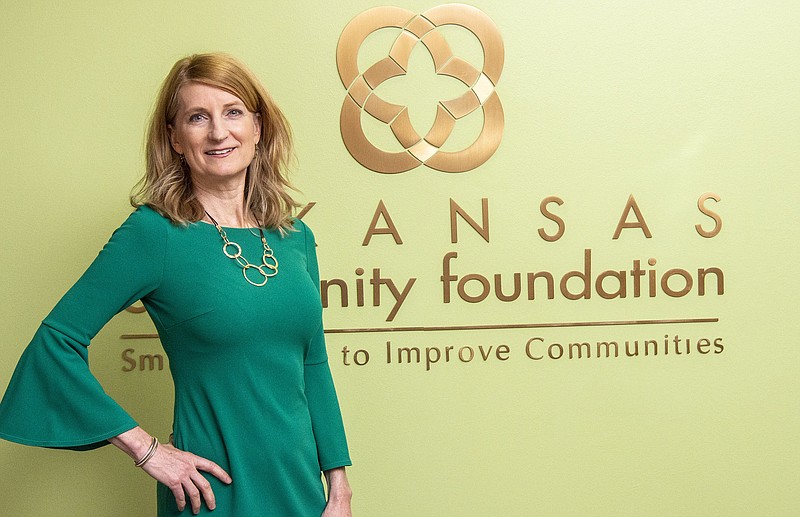 Heather Larkin on 03/08/2021 at her offices for High Profile cover. .(Arkansas Democrat-Gazette/Cary Jenkins)

Heather Larkin makes it all sound so easy, this business of convincing people to become -- well, once they get past the word: philanthropists.

Before she went to work for the grant-making Arkansas Community Foundation in Little Rock, Larkin says, "I thought philanthropy was a very highfalutin word."

But as president and chief executive officer of the statewide foundation and its $500 million in assets, she thinks differently about philanthropy -- and how to be a philanthropist.

It takes money, but it "doesn't necessarily have anything to do with the amount of your giving," she says. "It has to do with intention."

Some people give millions, most around $100 at a time. The money enables grants: $200 million worth of grants in the last five years, including $3.5 million in grants through the foundation's statewide Covid-19 Relief Fund.

Larkin says a blessing of her job is to meet with a millionaire one morning, "and then later in the day sit with that person who has worked for years to start a small endowment for the cause they care most about."

Money that goes to help fix a big problem over time is philanthropy. Charity is something else, like firing off a check to the food bank in a crisis. They need the money right now, and it won't last.

"Both are critical," Larkin says. "But if you find time to start asking questions and thinking about an issue important to you, you begin to move from charity to philanthropy."

Addressing hunger needs, for example: "Trying to decrease the number of hungry people takes a lot more understanding of the issue, a lot more information. But what a worthy endeavor."

Or the arts: "Providing money to extend a collection is necessary, and wonderful and fairly easy. Trying to provide access to the arts and all its benefits to marginalized communities is much, much harder."

Animal welfare: "Saving a stray makes a difference," but it doesn't answer what to do about so many other dogs that need a home.

"The point is, it does not matter what your passion is," Larkin says. "The question is what do you want to do with your resources."

Generosity is complicated. What makes a person give to help someone else, and for nothing in return? Like the Lone Ranger, who wore a mask and left town in a hurry to keep from being thanked for the silver bullets.

"I believe generosity is innate," Larkin says. She claims never to have come across a true curmudgeon. The same person who might seem miserly to the outside world is a different soul across from her desk.

"Yes, it may be easy to ignore needs when they do not affect you personally," she says. "But I have never met a person, when they really see a need, and they believe they can make some small difference, who won't provide an act of generosity.

"The key is that we have to get out and see. There is research that says gated communities tend to be less generous than communities of poverty. It is often the case that the poorest are the most generous."

For her, the need to see is why "it is so important to serve on boards and to volunteer."

Her involvements outside the foundation include the Acansa Arts Festival, Rotary Club 99 and the Women's Leadership Forum.

She studied Southern philanthropy through the Southeastern Council of Foundations in Atlanta, and teaches as a scholar in residence at the Center on Community Philanthropy at the Clinton School of Public Service in Little Rock.

As a friend, "she is someone I find to be kind and sharing. I admire her."

The word "generosity" is from the Latin generosus, meaning "of noble birth." From this, comes the old thinking that only the highfalutin rich are entitled to be generous, like the 19th-century steel tycoon Andrew Carnegie and his late-life turn to building libraries.

Today's pop culture adds the glitter of celebrity philanthropists, and internet sniping at "phony generosity": the gift made only for show. If the donor is so rich that he doesn't miss what he gave, does it still count?

Larkin's role is to thank those who give big, and to welcome those who start small, and all the while to explain what philanthropy means for everyone.

The foundation works, she says, thanks to "the power of endowments and the number of Arkansans willing to give. These donors' endowed assets are pooled and invested so that the principal remains intact and the earned money can be invested to improve communities forever."

Donors have a choice of ways to pitch in.

"There is no minimum to make a gift to any of our initiatives," Larkin says. People give to support, for example, scholarships -- giving not just cash, but also life insurance, real estate, even crops.

Higher up the giving ladder, "our minimum to start a charitable fund is $1,000, and $10,000 for a perpetual endowment." Some donations are invested for growth, and some are not.

A fund can be set up for immediate impact, and therefore not invested. The whole balance is available to causes of the donor's choice. A long-term endowment stays in place. The money is invested, and only a bit of it -- about 4% a year -- goes out as grants.

The foundation offers "smart giving" as an alternative to feeling unsure, as a donor, of where to send a check that will do the most good.

Larkin oversees 15 full-time employees and 29 part-time employees, including the operation of 29 affiliate foundations around the state, each with its own office and board. The North Delta Community Foundation is the most recently added.

"Our value system is that local people make local decisions to meet local challenges and opportunities," Larkin says. "When we say we are a statewide foundation, we mean it. We have feet on the ground all over this state."

Jerry B. Adams, president of Arkansas Research Alliance, is a past chairman of the foundation's state board and founding board chair of the Faulkner County Community Foundation. He compares the way things work to banking. The local foundation is like a checking account, he says, and the state more like savings.

"I had the good fortune of being one of Heather's first board chairs of the state board shortly after she became the new president and CEO," Adams says. "Heather's tenacity and hard work, plus her willingness to listen, were real gifts [to the Arkansas Community Foundation].

"Many people don't know that Heather is a member of the Hendrix College Sports Hall of Honor," Adams adds. "That same competitive focus is also a factor in the growth and vision" of the foundation.

Larkin, class of '93, made the honor list as a four-sport Hendrix Warrior for track and field, basketball, volleyball and cross country.

"It was athletics where I learned as much about life as I did in the classroom," she says. "You learn to win, and more importantly, you learn to lose and then try again."

These days, she keeps up with workouts and "playing a game of horse [two-player basketball] with my very competitive husband."

Larkin divides her time between the work week in Little Rock and home in the country with husband-rancher Rick Barton, the cowboy "who definitely makes my life possible."

Home is where she swaps ledgers for jeans, plans to drive the same truck "until it quits on me," and takes in any horse, dog or cat that makes it to the barn.

Growing up in rural Arkansas, Larkin also learned from her parents' drugstore "the entrepreneurial spirit to survive," and cash flow. "I understood cash flow -- meaning the lack of it -- at a very young age."

As the business thrived, "I thought I might follow in their footsteps," she says. "But I got distracted with philanthropy."

Larkin joined the Arkansas Community Foundation in 1998 as director of development. She brought to the job a degree in economics and business from Hendrix in Conway, and a legal degree from the University of Arkansas School of Law in Little Rock.

"That impressed me on interviewing her," says Pat Lile, then president of the foundation that was founded in 1976.

Lile "took a chance on me," Larkin says. But Lile remembers differently.

"Actually, she took a chance on us," Lile says. "The foundation was not in strong financial shape. The board and I were elated that my grant proposal to the Winthrop Rockefeller Foundation had been approved, allowing me to expand our four-member staff.

"I titled the position director of development, but it was not the concept of traditional, fundraising development," she says. "My vision for this position was that I wanted to hire a person who had the skills I appreciated in attorneys. That is, ability to work with a broad array of people, to communicate well both in writing and in speaking."

Larkin took over the president's responsibilities in 2008, after Lile's retirement.

Past board member Charlotte Banks Brown credits Larkin "for her God-given ability to be a leader, and the way she has surrounded herself with the very best in terms of staff."

"I've always been engaged with that group," Brown says, "and it's just such a treasure of a foundation."

She credits Larkin -- "endearingly humble, and at the same time smart as a whip" -- for building the foundation's assets to "half a billion bucks, a lot of cash."

The comic-book stories of Disney's Uncle Scrooge McDuck, the world's richest duck, show something of what a half billion dollars looks like. Cash piles up in drifts in Scrooge's money bin, where the old duck likes to "burrow through it like a gopher," he says. "And toss it up and let it hit me on the head."

But Larkin doesn't see it that way.

"When I came here," she says, "the challenge was literally how to keep the doors open." The foundation already held millions, "but it takes a lot of money to produce money." Meanwhile, "budgets were tight."

"I think I have a very healthy understanding that we are stewards and charged with making the best use of every dime."

GIVE A LITTLE MORE

"I went to work at the Arkansas Community Foundation for what I thought would be a couple of years," Larkin says. "Twenty-plus years later, I am still at the community foundation, and I love it just as much now as I did then.

"I don't know how many times I have said, 'Well, we won't make that goal, but in the end, we will be closer than when we started.' It seems like you have to readjust and readjust, and then you look back and you see how certain things fell into place just by keeping on.

"The driving question is impact -- what are we able to do as a foundation, made up of hundreds of different donors with multiple ideas and passions?

"I've found it to be absolutely fascinating."