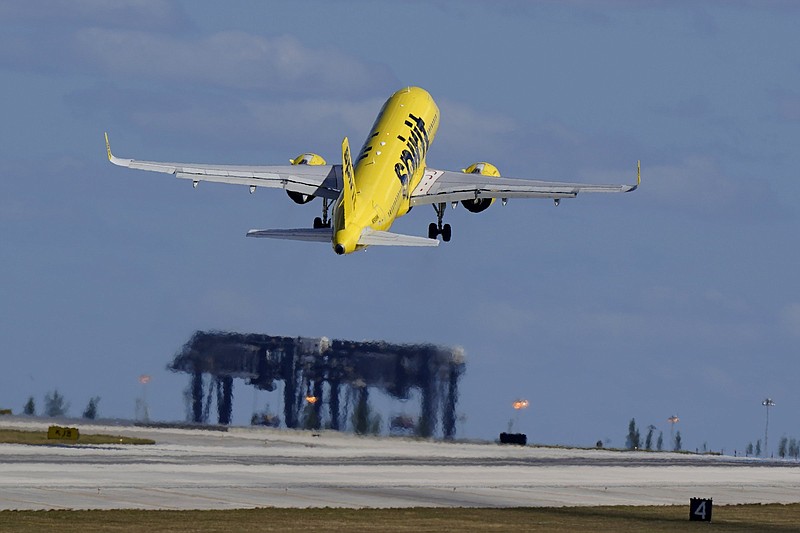 A Spirit Airlines Airbus A320 takes off last month in Fort Lauderdale, Fla. The new covid relief measure provides $15 billion in support for airlines to keep more than 27,000 front-line employees on the job through September. (AP/Wilfredo Lee)

In a video posted on Instagram shortly after the House approved the $1.9 trillion American Rescue Plan this week, Doug Parker, chief executive of American Airlines, was in a celebratory mood.

"All of our U.S.-based team members now have job protection through Sept. 30 of 2021," he said. "So if you have one of those WARN [Worker Adjustment and Retraining Notification] notices we sent out in February, tear it up. There aren't going to be any furloughs at American Airlines in April and with vaccinations on the rise, hopefully never again."

The measure, which President Joe Biden signed Thursday, provides $15 billion in payroll support, enough to keep more than 27,000 frontline employees -- including flight attendants, mechanics and pilots -- on the job through September. It represents a rare bright spot for an industry battered by a pandemic that has left it reeling from the worst financial crisis in its history.

Airlines and their employees aren't the only beneficiaries of the relief package.

Airports, public transit agencies and Amtrak stand to receive billions in support -- dollars that will enable them to bring back workers, restore service and stave off more dire cuts.

Amtrak will receive $1.7 billion under Biden's plan, allowing it to restore daily service on 12 long-distance routes that were reduced in 2020. The passenger railroad system also will be able to bring back 1,200 employees who were furloughed last year.

Passage of the relief plan comes nearly a year after the first pandemic-related relief measure, known as the Coronavirus Aid, Relief, and Economic Security Act, or the CARES Act, was signed into law. At the time, few expected the pandemic would stretch so long and prove so devastating. More than 532,000 people in the United States have died of the coronavirus.

Jeff Davis, a senior fellow at the Eno Center for Transportation, a Washington-based nonpartisan think tank, said funding in the new measure will provide transit agencies with enough money to weather the pandemic, providing a cushion as they adjust to commuting patterns that emerge as the United States begins its recovery.

"When the CARES Act was written and passed hurriedly in March 2020, the scope of the pending covid disaster was not yet known," Davis said. "The endpoint now appears in sight and the funds provided by the three bills for mass transit, airlines and airports is enough to see them all through that period."

He said the pandemic relief measures will buy Congress time to determine whether adjustments in federal funding for public transit and airports will be needed after the health emergency has passed.

Robert Martinez Jr., international president of the International Association of Machinists and Aerospace Workers, said the new measure brings welcome relief for workers who have spent months worried about losing their jobs and benefits.

"Critically, this legislation extends the airline Payroll Support Plan, which will keep tens of thousands of airline workers on the job as we distribute vaccines and ramp up air travel," he said.

For airlines, the legislative package brings relief because the industry won't have to furlough employees at the end of this month.

Even with billions in government support, the industry will still face a difficult path forward, said Henry Harteveldt, an aviation analyst and president of San Francisco-based Atmosphere Research Group. He and other analysts said a recovery to 2019 passenger levels is probably years away.

Adding to the uncertainty are questions about when and if the industry's most lucrative customers -- business travelers -- will return.

"This has been – outside of war, and outside of 9/11 -- the most severe crisis that has faced the airline industry," Harteveldt said.

While the payroll support program has kept airline workers on the job, the industry is still significantly smaller than it was before the pandemic.

But some help is better than none.

Consider the plight of the Near Airport Parking Industry Trade Association, which spent much of last year and part of this year fighting for a piece of the pandemic relief pie.

While some small parking operators were eligible under the Paycheck Protection Program, five companies that operate off-site parking areas near airports across the U.S. were not included.

"Maddening is a good word for it," said Sarah Fisher, senior vice president, general counsel and chief government affairs officer for the Parking Spot, which operates lots in 38 locations, including those near Baltimore-Washington International Marshall Airport. "It's been a tough year and we had to have some very difficult conversations with employees because of the fact we haven't been able to access any of these programs."