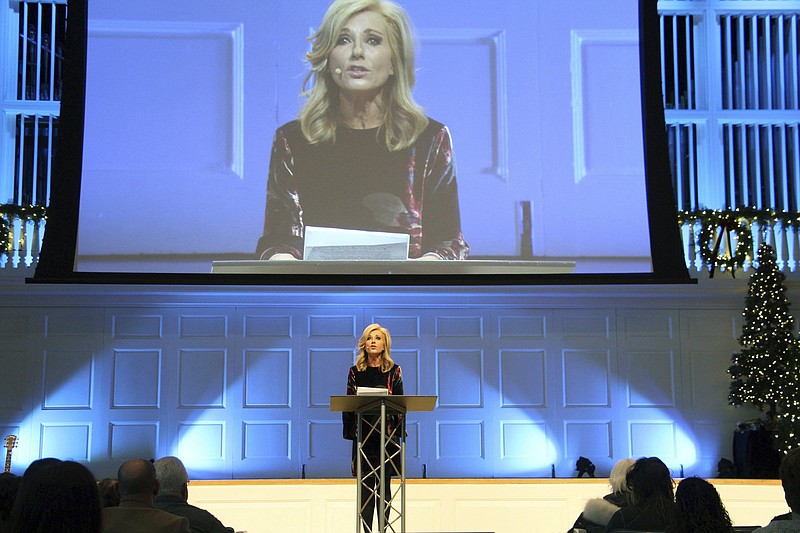 Beth Moore addresses a summit in Wheaton, Ill., on sexual abuse and misconduct at Wheaton College in 2018. Bible study teacher Moore has been beloved among Southern Baptists for years, packing stadiums and selling millions of books. But when Moore began to criticize then-President Donald Trump and call out sexism, racism and abuse in the church, she became a pariah. Now Moore has left the nation’s largest Protestant denomination, saying she can no longer identify as Southern Baptist. (Religion News Service via AP/Emily McFarlan Miller)

For conservative evangelical critics of former president Donald Trump, the past few years have been painful and isolating. But this week things got personal in a new way, with a dramatic announcement by celebrity Bible teacher Beth Moore that she no longer considers herself a Southern Baptist.

Moore, a frosty-haired, joke-cracking Texan who runs a $15 million ministry wildly popular among conservative Christian women, has for several years been raising concerns about what she sees as hypocrisy in evangelicalism.

Then this week she went further, revealing an identity shift and parting ways with the Southern Baptist Convention's publishing arm that distributed her Bible teaching.

While religious denominations, including the Southern Baptist Convention, have been losing members for years, the convention remains the country's largest Protestant group, and Moore's exit has created chaos for the denomination that has debated women's roles in recent years.

Even if women won't necessarily leave their Southern Baptist Church or conservative evangelical church, many discussed this week whether to emulate Moore's bravery in some way -- and if so, how?

After reading about Moore's decision to leave the convention, Caitlin Snyder, a 30-year-old who attends a Southern Baptist church, said a friend from church texted her Wednesday morning.

"When are we getting our 'We love Beth Moore tattoos?'" the friend asked.

Snyder, who hosted a Beth Moore Bible study in her apartment with other women, described Moore as the teacher who has had the most "profound impact" on her life.

Snyder said she has watched Moore carefully over the years and especially noted when Moore spoke out against Trump on Twitter in 2016. Even though Snyder values her local church, she said she has become frustrated with several recent debates within the Southern Baptist world, including how many leaders discourage women from preaching and oppose Critical Race Theory, which views racism as central to society's problems. Official positions against Critical Race Theory have prompted several Black pastors to leave the denomination.

But, she said, none of this will prompt her to leave her own church or the denomination, nor will it cause others to depart.

"Most women are focused on raising their kiddos and they love their local church. They may not realize their church affiliates with the [Southern Baptist Convention]," she said. "It's an encouragement to me to see someone stand for their convictions, but I'm not going to leave my own church for it."

Moore's shift in religious identity was first reported by Religion News Service, which noted that "because of her opposition to Trump and her outspokenness in confronting sexism and nationalism in the evangelical world, Moore has been labeled as 'liberal' and 'woke' and even as being a heretic for daring to give a message during a Sunday morning church service."

Moore, 63, told the news service that she is still a Baptist, but "can no longer identify with Southern Baptists," her denominational home of more than 30 years. She said she recently ended her longtime publishing partnership with Nashville-based LifeWay Christian, which is affiliated with the convention.

Her Living Proof Ministries, between 2001 and 2016, built assets from about $1 million in 2001 to just under $15 million by April 2016, Religion News Service reported, citing IRS filings.

Whether Moore identifies with a specific local church is unclear, and her assistant said she declined to respond to further questions. She has been attending services at Houston Northwest Church, a church affiliated with the denomination, the church's pastor Steve Bezner said in December, but he said Wednesday that she has not joined a church since she stopped attending a Southern Baptist Church where her son-in-law preached.

In 1982, Moore joined First Baptist Church in Houston where she taught aerobics classes. She began teaching Bible classes that attracted thousands of women, eventually selling out larger venues, and her videos were distributed to churches across the country. Becky Loyd, director of Lifeway Women, estimates that Moore's studies have reached more than 17.5 million women worldwide and said LifeWay has hosted more than 2 million women through more than 300 events. Moore's reach also extends far beyond the Southern Baptist Convention. (She has nearly 1 million Twitter followers.)

She has become an Oprah Winfrey-like figure for many white evangelical women, with fiercely devoted fans. Eric Geiger, a minister in California who was a vice president at LifeWay, said he was struck by how people relate to her stories. She has shared in books and videos about her hysterectomy, giving her adopted son back to his birth mother, and her daughter's eating disorder.

"Every church I've been at have women in the church who feel indebted to Beth and how she helped them through a tough time," he said.

In recent years, Moore has increasingly become a target of criticism from fellow evangelicals. She has described 2016 as a turning point for her when she expressed shock at how many white evangelicals embraced Trump. In 2019, Moore set off a firestorm when she jokingly suggested on Twitter that she was planning to preach on Mother's Day. (In the denomination, "the office of pastor is limited to men as qualified by Scripture," according to the group's Baptist Faith and Message, its doctrinal statement.) More recently, she denounced Christian nationalism after the Jan. 6 insurrection at the U.S. Capitol in tweets that went viral.

Conservative Christian writer Nancy French said Wednesday that Moore's announcement -- and recent fierce criticism of Moore for her teaching and outspoken ministry -- feel like one more step pressing women to reconsider their place in their faith institutions.

"This is the time to graciously stand for truth and to stand for Beth Moore. That means standing up and refusing to acquiesce," she said. "I feel my whole life I've acquiesced."

Moore, who has publicly shared her own experience of abuse by a family member, is known for connecting with women emotionally and helping them overcome some of their deepest fears. In recent years, she developed relationships with survivors of sex abuse, including Megan Lively, who in 2018 publicly shared her story of being raped while attending a Southern Baptist seminary. Lively said Wednesday that Moore has been an important advocate behind the scenes for her.

Rachel Gulledge, who grew up in a small town in Alabama, said that her first memories of Moore started around age 5 when she would watch her Bible study videos Saturday nights with her mother. She said she watched the evolution of Moore's hair over the years, which Moore jokes about regularly in her videos.

"Beth Moore leaving is sad to me, but I don't blame her," she said. "I hate it. I really do. For women, we probably lost one of our biggest voices."

Gulledge, whose husband will soon become senior pastor of a Southern Baptist church in Georgia, said she hopes the convention starts to focus on what women can do instead of what they can't do, such as ministry roles they can fill apart from being a church's senior pastor.

"My brother asks me all the time, 'Why are you staying?'" she said. "We want to see the good change that needs to happen."

Ed Stetzer, who once led LifeWay Research at the publishing arm, said Southern Baptist leaders are worried about the departures of Moore and Black leaders and the influence it could have on others.

J.D. Greear, president of the convention, said in a statement that he is praying that the news of her departure will "cause us to lament" ahead of the denomination's annual meeting. The convention, which has been in turmoil over concerns around race, women's roles and sex abuse in recent years, will choose a new president when Southern Baptists meet in June.