This inexpensive crucifer is low in calories, a hardy workhorse in recipes by Arthi Subramaniam, Pittsburgh Post-Gazette (TNS) | March 10, 2021 at 2:07 a.m. 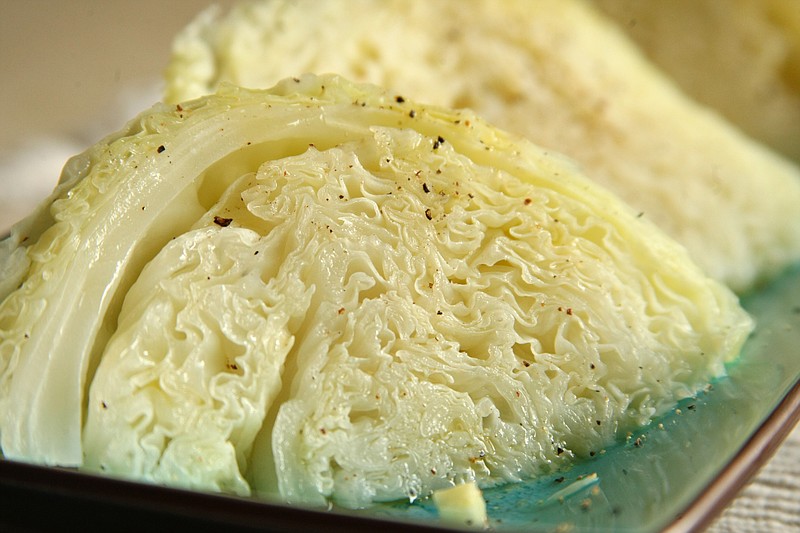 When a cabbage costs only 99 cents, it is easy to go overboard and buy more than one at a time.

I am one of those shoppers who goes cabbage giddy in the weeks leading up to St. Patrick's Day, when the price is more than right for bright-looking heads that are tightly wrapped with verdant leaves sans black spots or holes.

Without giving a thought as to how they are going to be used, I would load two to three in my shopping bag. The what-do-I-do-with-the-cabbages moment usually won't hit me until I try to fit them in my refrigerator's produce drawer as the heads do take a chunk of space.

Invariably, I would be forced to use one immediately. And it's just as well because keeping in step with St. Patrick's Day, I would whip up a colcannon. I would save a second one to be used later in the month as cabbages are quite hardy and keep for more than a week in the refrigerator. The third one would be shredded and stashed away in a plastic bag in the freezer for down the road.

And when I say shredded, I mean hand-shredded. Call me a masochist, but I find cutting cabbage to be a welcome mind relaxer. There is something about separating a cored cabbage into stacks of leaves, flattening them slightly and then slicing each stack into thin shreds that gives me immense satisfaction, even if it is time consuming. If you think those few steps are agonizing, be lazy and just use the food processor.

There is no denying that cabbage comes with baggage — it is a stinker when cooked. A funky odor fills the kitchen from the sulfur compounds that are released, especially when the crucifer is overcooked.

The indifference toward the vegetable doesn't just stop with the smell. It also is unfairly overlooked and underrated because it is readily available year-round.

So how about treating the cabbage for what it really is? Weight watchers should embrace it for being low in calories and rich in vitamins and folate. And cooks should appreciate it for being versatile, a team player and kitchen workhorse.

The crucifer works fantastically well when used raw in slaws, is pleasingly sour when fermented into sauerkraut or kimchi, and meltingly soft when boiled with other vegetables in soups and braised with meats or simply with cream and shallots.

Its underlying natural sweetness comes out when sautéed with bacon and caraway seeds or fennel and garlic. The key here, however, is not to overcook it. Remember, it is being sautéed and not braised. The sweetness also is undeniable when it is baked and transformed into an au gratin.

For a charred and caramelized flavor, season cabbage wedges with salt and pepper and drizzle olive oil on top before roasting them in the oven. Another minimalist way to cook the wedges is to simply boil them, with or without bacon, and serve with melted butter.

Cabbage works well with traditional and unconventional flavor combinations whether it is raw or cooked.

Slaws and salads: The crucifer has a high water content and a tendency to leach out water and so it is essential to get the excess moisture out especially when tossing it in slaws and salads.

To make a crunchy and not soggy salad, salt the shredded cabbage and let it sit for about an hour. Then rinse the cabbage under cold water and drain it well. You could even blot the cabbage dry with paper towels before tossing it with a honey-mustard or buttermilk dressing or with cucumbers or pickled onions.

Braised cabbage: Braising allows the cabbage to absorb all the surrounding flavors. Spices like cinnamon, coriander, cumin, allspice and caraway seeds enhance the taste and so do aromatics like ginger and garlic. Splashes of vinegar can perk up the flavor, too. For a subtle heat, sprinkle in some hot paprika or cayenne. While braised cabbage is a dish in itself, it gets some body and bolder in flavor when meats are added. For some extra richness, stir in some butter at the end.

Here are several recipes that give cabbage the respect it deserves, along with some love.

Bring several inches of water to boil in a large pot. Cut cabbage into 4 wedges. When the water comes to a boil, place cabbage wedges in a steamer basket or metal colander and place over boiling water. Steam 5 to 10 minutes or until cabbage is just tender. Drain well. Meanwhile, melt butter in a small saucepan over medium-low heat. Add garlic and cook 30 seconds, stirring constantly. Place cabbage wedges on a serving platter and drizzle with melted butter; season to taste with ground black pepper and salt.

Recipe adapted from "How to Cook Everything: 2,000 Simple Recipes for Great Food" by Mark Bittman

Drain potatoes in a colander. Force them through a ricer into a bowl, and stir in milk, butter, cabbage and salt and pepper to taste.

Recipe from Laura Lynn Brown via the Arkansas Democrat-Gazette. 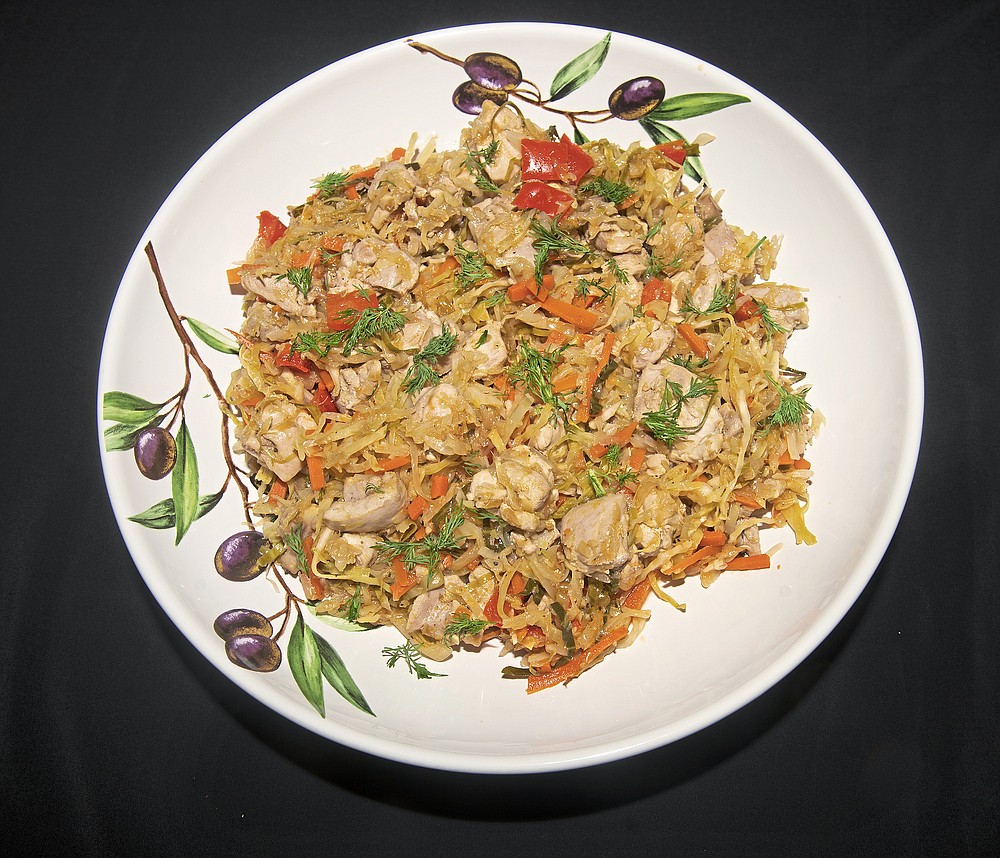 An assortment of vegetables is cooked along with cabbage and chicken in this crowd-pleaser. It can be served with sides such as rustic rye bread or mashed potatoes.

Heat a large Dutch oven pot or cast-iron pan over medium-high heat and add a small amount of oil.

Once the pot is hot, add the chicken thighs and season them with ½ teaspoon of salt and ¼ teaspoon of black pepper. Cook the chicken for 5 to 6 minutes, until it is well browned all over. Transfer chicken to a medium bowl and set it aside.

Reduce heat to medium. Add the butter and allow it to melt. Add carrots, bell pepper, mushrooms, onion and garlic. Sauté the vegetables for 5 to 7 minutes, until the onion is tender and translucent but not brown.

Return chicken to the pot and season the mixture with the remaining 1 ½ teaspoons of salt, ¼ teaspoon of black pepper, cumin, coriander and paprika.

Cook for 1 minute, then add the cabbage and sauerkraut. Using a large spatula, toss all the ingredients together. Taste and add more salt if needed.

Reduce the heat to medium-low. Cover the braising pan with a lid and cook for 20 minutes, stirring every 5 minutes. 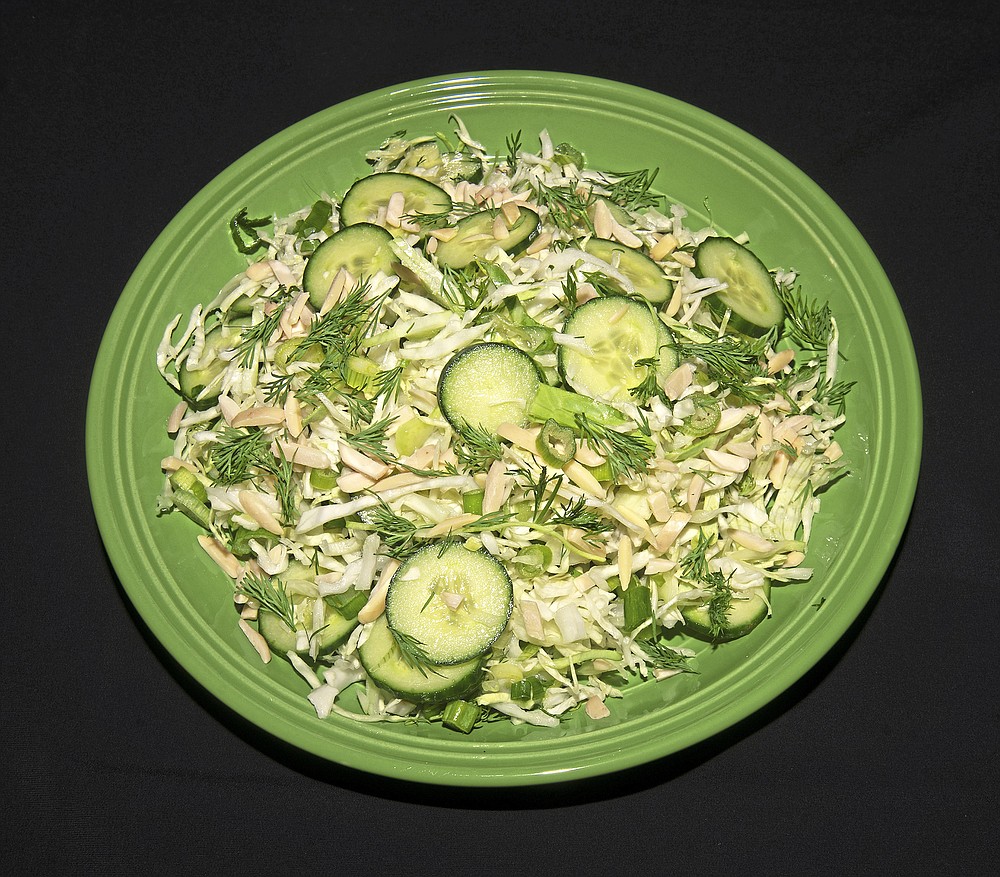 This is a simple salad but the flavor lingers. Thank the dill.

Place the cabbage in a large bowl. Add the cucumbers, green onions, dill and almonds. Pour the oil and vinegar over the salad.

Season with salt and toss. 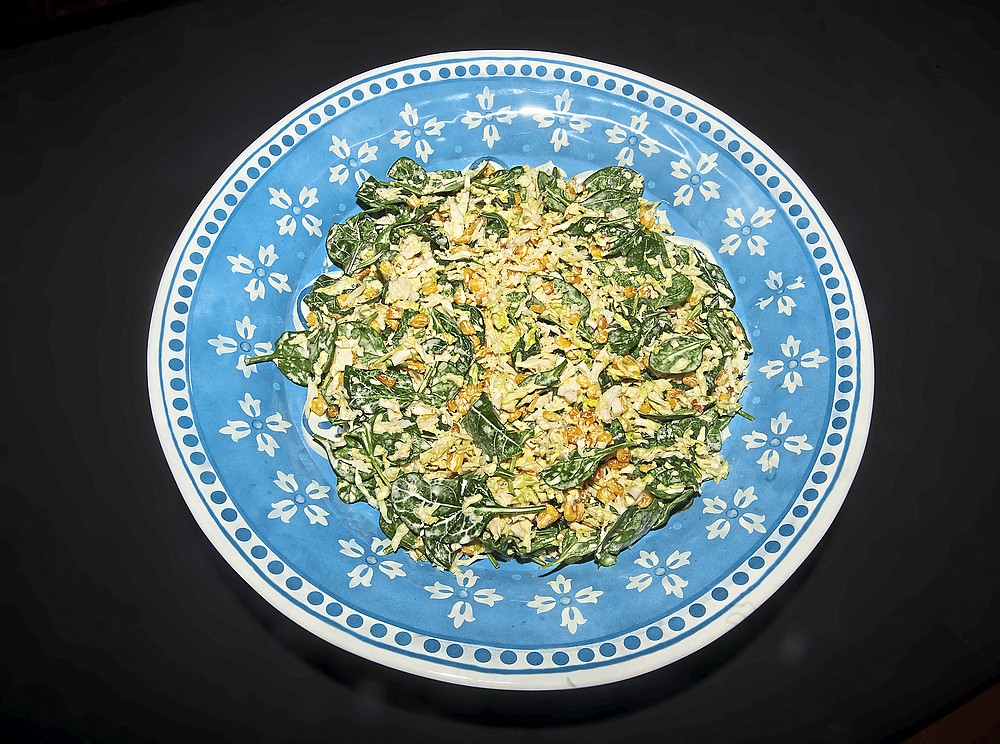 It is best to let the slaw rest for a few hours in the refrigerator so that the flavors meld together.

Squeeze out the excess moisture from the thawed corn kernels.

Taste and season with salt and black pepper.

Cover and chill for several hours before serving.