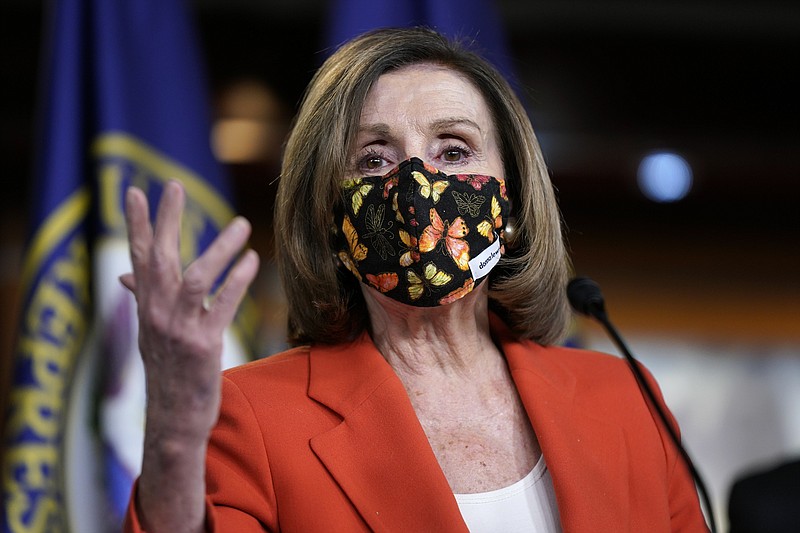 In this March 2, 2020, photo, House Speaker Nancy Pelosi of Calif., speaks during a news conference in Washington. House Democrats are hustling to pass the most ambitious effort in decades to overhaul policing. They are confident they can avoid clashing with moderates in their own party who are wary of reigniting the same “defund the police” debate that they say hurt them during last fall’s election (AP Photo/Patrick Semansky)

WASHINGTON -- House lawmakers are set to vote as soon as today on a roughly $1.9 trillion coronavirus relief package, putting President Joe Biden on track to sign his first major legislative accomplishment into law by the end of the week.

Democrats in the chamber are expected to approve the bill -- which includes an expansion of pandemic aid and federal safety net programs -- despite changes to critical elements of the stimulus adopted by the Senate over the weekend.

Dubbed the American Rescue Plan, the package authorizes $1,400 checks to millions of low- and middle-income Americans, bolsters families by providing new child tax benefits, boosts unemployment payments for workers still out of a job and authorizes a wide array of additional programs in an attempt to shepherd a swift, equal recovery to one of the worst economic crises in a generation.

[Video not showing up above? Click here to watch » https://www.youtube.com/watch?v=qgbP23TpTnY]

The timeline puts Congress on track to adopt the stimulus package before millions of Americans are set to lose unemployment benefits Sunday. And it also opens the door for the U.S. government to start sending one-time checks to a large number of families "by the end of the month," White House press secretary Jen Psaki said Monday.

Biden plans to give his first national televised address Thursday night that is expected to touch on the emergency coronavirus aid, Psaki said at her daily briefing.

Meanwhile, a key moderate Democrat says he's open to changing Senate rules that could allow for more party-line votes to push through other parts of the White House agenda.

West Virginia Sen. Joe Manchin stressed Sunday that he wants to keep the procedural hurdle known as the filibuster, saying major legislation should always have significant input from the minority party. But he noted there are other ways to change the rules that now effectively require 60 votes for most legislation. One example: the "talking filibuster," which requires senators to slow a bill by holding the floor, but then grants an up-or-down simple majority vote if they give up.

"If you want to make it a little bit more painful, make him stand there and talk," Manchin added. "I'm willing to look at any way we can, but I'm not willing to take away the involvement of the minority."

On Monday, Psaki reiterated that Biden has no interest in tweaking the filibuster.

"His preference is not to make changes to the filibuster rules. But he believes that with the current structure that he can work with Democrats and Republicans to get work and business done," she said.

On Sunday, the anti-filibuster advocacy group "Fix Our Senate" praised Manchin's comments as a viable way to get past "pure partisan obstruction" in the Senate.

"Sen. Manchin just saw Senate Republicans unanimously oppose a wildly popular and desperately-needed covid relief bill that only passed because it couldn't be filibustered, so it's encouraging to hear him express openness to reforms to ensure that voting rights and other critical bills can't be blocked by a purely obstructionist minority," the group said in a statement.

The Democrats' approach required a last-minute call from Biden to Manchin to secure his vote after he raised late resistance to the breadth of unemployment benefits. That immediately raised questions about the path ahead in a partisan environment where few if any Republicans are expected to back planks of the president's agenda.

Democrats used a fast-track budget process known as reconciliation to approve Biden's top priority without Republican support, a strategy that succeeded despite the reservations of some moderates.

Not a single Republican voted for the $1.9 trillion stimulus -- either the earlier version that cleared the House in February, nor the one passed by the Senate on Saturday. To woo centrist Democratic lawmakers, the party's Senate leaders proffered some late changes that removed from the House-passed version an increase to the federal minimum wage, while lessening the amount of enhanced weekly benefits for workers still collecting unemployment.

The alterations initially appeared to frustrate more left-leaning lawmakers in the Democratic caucus, creating the potential for friction in the House, where Democrats have only five votes to spare. But progressive leaders appeared to approve of the measure anyway, with Rep. Pramila Jayapal, D-Wash., the chief of the Congressional Progressive Caucus, saying in a statement Saturday that it is "exactly what economists say is needed to jump-start our economy and the labor market."

"Importantly, despite the fact that we believe any weakening of the House provisions were bad policy and bad politics, the reality is that the final amendments were relatively minor concessions," she said.

Republicans say Americans have plenty of reason to be skeptical, calling the American Rescue Plan excessive and wasteful. They warn the sweeping package will run up the national debt to precarious new heights after $4 trillion in aid has already been provided.

Senate Republican leader Mitch McConnell of Kentucky argued against the package as missing the moment -- too big at a time when the virus is showing signs of easing and the economy is poised to come "roaring" back.

Instead of working across the aisle toward unity, as Biden has promised, McConnell said Democrats are "ramming through what they call 'the most progressive domestic legislation in a generation,'" quoting the White House chief of staff.

"They explained their intent very clearly: to exploit this crisis as 'a tremendous opportunity to restructure things to fit our vision,'" McConnell said.

On Monday, Treasury Secretary Janet Yellen stressed the need to avoid "permanent scarring" in the economy from the pandemic. Speaking with International Monetary Fund Managing Director Kristalina Georgieva for International Women's Day, she said the concern is particularly acute at a time when women are dropping out of the labor force in high numbers with schools closed.

"I really hope by next year -- I think there's a prospect with an all-out effort on vaccination and reopening schools that we can really get the labor market back on track this year or next year to avoid what we had after the financial crisis, which was almost a decade before the economy ever got back to full employment," Yellen said. "We don't want to see that this time."

Information for this article was contributed by Tony Romm and Jeff Stein of The Washington Post; and by Hope Yen, Alan Fram, Lisa Mascaro, Josh Boak and Kevin Freking of The Associated Press.