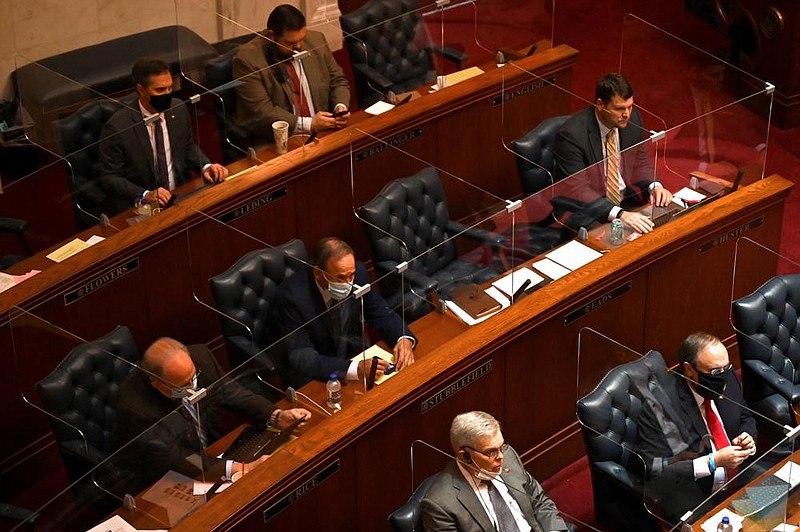 In a voice vote with no audible dissenters, the Senate Public Health, Welfare and Labor Committee recommended approval of Senate Bill 341, by Sen. Bob Ballinger, R-Ozark, over the objections of representatives of the Arkansas Education Association, Arkansas AFL-CIO and Arkansas Professional Firefighters Association.

Ballinger said his bill wouldn't apply to cities or counties.

He said it's good public policy to have employees, who work for taxpayers, hold the state entities accountable outside of a union.

"They can have a union. They have their association, but as far as collective bargaining, we are prohibiting it from a policy standpoint as a state," he said.

Under the bill, the definition of public employer would include an agency, department, board, commission, division, office, bureau, council, authority or other instrumentality of state as well as a state-supported college, university, technical college, community college or other institution of higher education or a department, division or agency of a state higher education institution.

Under the bill, a public employer also would include the state Supreme Court, Court of Appeals, the Administrative Office of the Courts, circuit courts and prosecuting attorneys' offices and public school districts.

The bill exempts "public safety officers," including law enforcement and firefighters from the collective-bargaining restriction.

Tracey-Ann Nelson, executive director of the Arkansas Education Association, told the Senate committee that Senate Bill 341 "directly targets our educators who have shown up every single day at schools and in every way possible teaching students, transporting them and serving them meals since the beginning of the pandemic, knowing they are putting themselves and their families at risk."

"They should be respected, not attacked," Nelson said.

In 2019, the Arkansas Board of Education voted to end recognition of the Little Rock Education Association as a collective bargaining agent for teachers in the Little Rock School District. The highly controversial vote came as the district was under state control due to being in "Level 5 -- in need of intensive support" category of the state's school district classification system due to chronically low test scores at a handful of schools in the district.

The teacher's union had been recognized as a collective bargaining agent since 1966.

Nelson said the legislation removed a public employer's ability to make workforce decisions on its own.

She said she made multiple attempts to reach Ballinger about his bill, but received no response.

"I respect he is a busy person, but when you bring forth legislation it is my experience that speaking with the author is an important step toward understanding," she said.

Ballinger said the he had tried to call Nelson back on Monday morning.

"I did leave you a voice mail so I assume it made it through," he said. "That's actually pretty good. If you are all like me, you get a whole bunch of calls and sometimes if it goes to voice mail it's hard to get back. But I do try to do that as much as possible."

Earlier, Ballinger told the Senate committee that "there was some concerns regarding public transit, and I think the amendment that we did took care of that."

"However, I am working with the University of Arkansas, with Razorback Transit, in order to verify that there is not a concern with losing any federal funds, so it is possible that, on the House end, we could do an amendment if the amendments that we have already incorporated didn't take care of that because that's not really the intent of the legislation to affect the facilities that collect federal funds," he said.

Wade Marshall, president of the Arkansas Professional Firefighters Association, said while he appreciated Ballinger exempting the association from the bill through an amendment, he still opposes it because he views the bill as an overreach.

"If they choose to do it, this would actually be impairing their rights as well as the employees," Marshall said.

Jessica Akers Hughes, representing the Arkansas AFL-CIO, said the AFL-CIO has affiliates in the public sector and some of them have collective bargaining rights in Arkansas, including Rock Region Metro drivers.

She said the bill would immediately jeopardize Rock Region Metro's eligibility for federal transit funds, including federal coronavirus relief funds. She asked that transit authorities, including Rock Region Metro, be exempted from the definition of public employer in this bill.

Ballinger said Rock Region Metro is amended out of the bill.