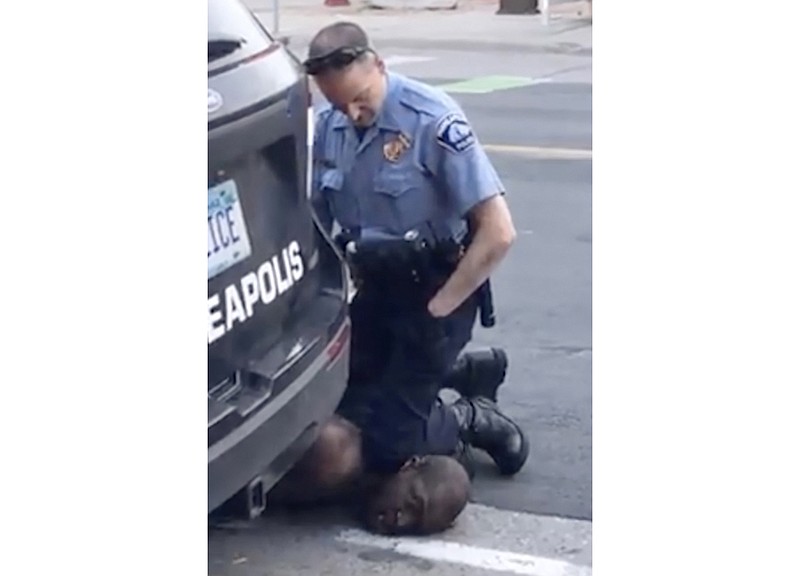 FILE - In this Monday, May 25, 2020, file frame from video provided by Darnella Frazier, then-Minneapolis Police Officer Derek Chauvin kneels on the neck of George Floyd, a handcuffed man who was pleading that he could not breathe. As the trial approaches for Chauvin, who is charged with murder in Floyd's death, prosecutors are putting the time Chauvin's knee was on Floyd's neck at about nine minutes. The time has fluctuated before. (Darnella Frazier via AP, File)

MINNEAPOLIS -- Jury selection for a former Minneapolis police officer charged in George Floyd's death was halted before it began Monday by the state's effort to add a third-degree murder charge.

As hundreds of protesters rallied outside the courthouse to call for Derek Chauvin's conviction, Judge Peter Cahill said he did not have jurisdiction to rule on whether the third-degree murder charge should be reinstated while the issue is being appealed.

[Video not showing up above? Click here to watch » https://www.youtube.com/watch?v=RWpznChaUuQ]

Cahill initially ruled jury selection would begin as scheduled, but after prosecutors asked the Court of Appeals to put the case on hold, the judge sent the potential jurors home for the day and the rest of the day was spent ruling on motions. Cahill later said jury selection would resume today barring an order from the appellate court.

There was no indication when that court will rule, but a hold could delay Chauvin's trial for weeks.

Prosecutors and defense attorneys agreed to dismiss 16 of the first 50 jurors they reviewed "for cause" based on their answers to a lengthy questionnaire. These dismissals weren't debated in court, but can happen for a host of reasons, such as views that indicate a juror can't be impartial.

Chauvin is charged with second-degree murder and manslaughter in Floyd's death. The Court of Appeals last week ordered Cahill to consider reinstating a third-degree murder charge that he had dismissed.

Legal experts say reinstating the charge would improve the odds of getting a conviction. Chauvin's attorney, Eric Nelson, said Monday that he would ask the state Supreme Court to review the issue.

Floyd was declared dead May 25 after Chauvin, who is white, pressed his knee against the Black man's neck for about nine minutes, holding his position even after Floyd went limp.

Floyd's death sparked sometimes violent protests in Minneapolis and beyond, and led to a nationwide reckoning on race.

Chauvin and three other officers were fired; the others face an August trial on aiding and abetting charges.

Hundreds of people gathered outside the courthouse as proceedings began, many carrying signs that read, "Justice for George Floyd" and "Convict Killer Cops."

One speaker, DJ Hooker, took a microphone and decried the concrete barriers topped by chain-link fencing, barbed wire and razor wire set up around the courthouse, and ridiculed talk of the Chauvin trial as "the trial of the century," saying the jury simply must "do the right thing."

He led the crowd in chants of "The whole world is watching!"

Inside the courtroom, Chauvin, in a blue suit and black mask, followed the proceedings attentively, making notes on a legal pad. No one attended to support him. Bridgett Floyd, George Floyd's sister, sat in the seat allocated to Floyd's family.

Afterward, Floyd said her family is glad the trial has finally arrived and is "praying for justice."

"I sat in the courthouse today and looked at the officer who took my brother's life," she said. "That officer took a great man, a great father, a great brother, a great uncle."

Jury selection could take at least three weeks, as prosecutors and defense attorneys try to weed out people who may be biased against them.

Jurors must be at least 18, U.S. citizens and residents of Hennepin County. Potential jurors were sent questionnaires to determine how much they have heard about the case and whether they've formed any opinions. Besides biographical and demographic information, jurors were asked about prior contacts with police, whether they have protested against police brutality and whether they believe the justice system is fair.

Some of the questions get specific, such as how often a potential juror has watched the bystander video of Floyd's arrest, or whether they carried a sign at a protest and what that sign said.

Jury selection will end after 14 people are picked -- 12 jurors who will deliberate the case and two alternates who won't be part of deliberations unless needed.

The earliest opening statements will begin is March 29.

Information for this article was contributed by Mohamed Ibrahim of The Associated Press. 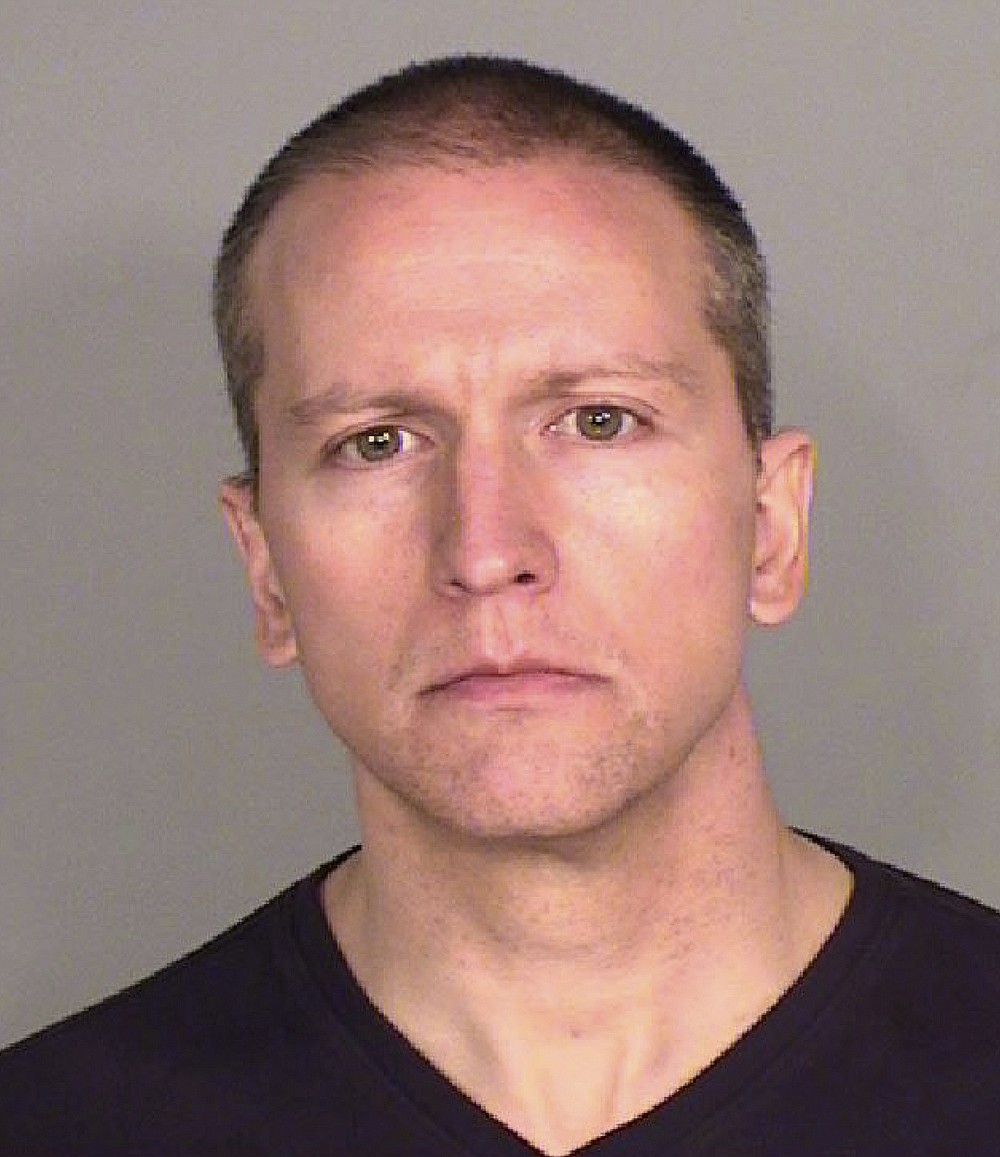 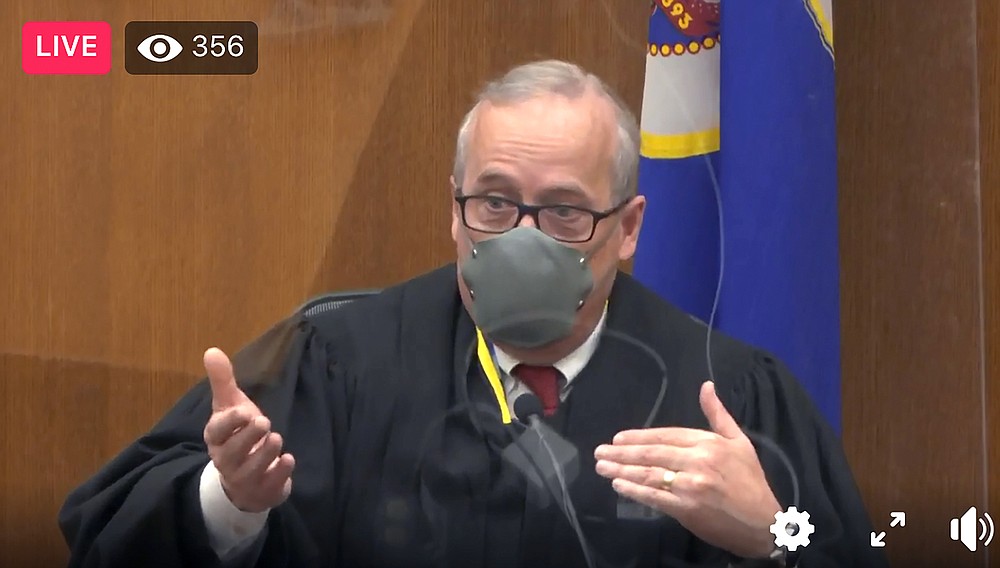 In this image taken from video, Hennepin County Judge Peter Cahill presides over a hearing before jury selection, Monday, March 8, 2021, at the Hennepin County Courthouse in Minneapolis, Minn., in the trial of former Minneapolis police officer Derek Chauvin, who is accused in the May 25, 2020, death of George Floyd. (Court TV/Pool via AP) 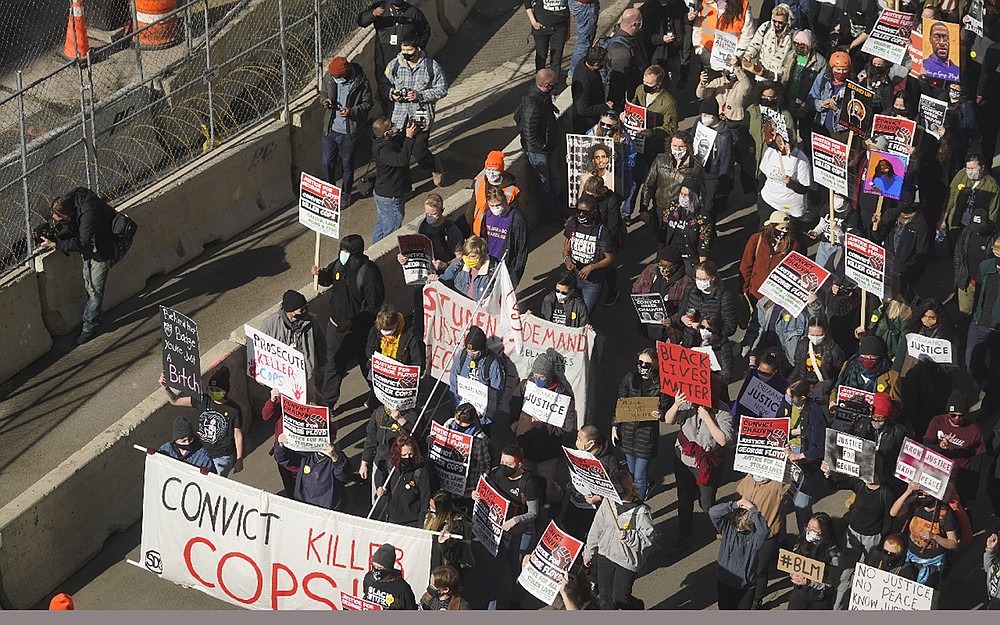 EDS NOTE: OBSCENITY - Hundreds of demonstrators march through Minneapolis following protests near the Hennepin County Government Center, Monday, March 8, 2021, in Minneapolis where the trial for former Minneapolis police officer Derek Chauvin began with jury selection. Chauvin is charged with murder in the death of George Floyd during an arrest last May in Minneapolis. (AP Photo/Jim Mone) 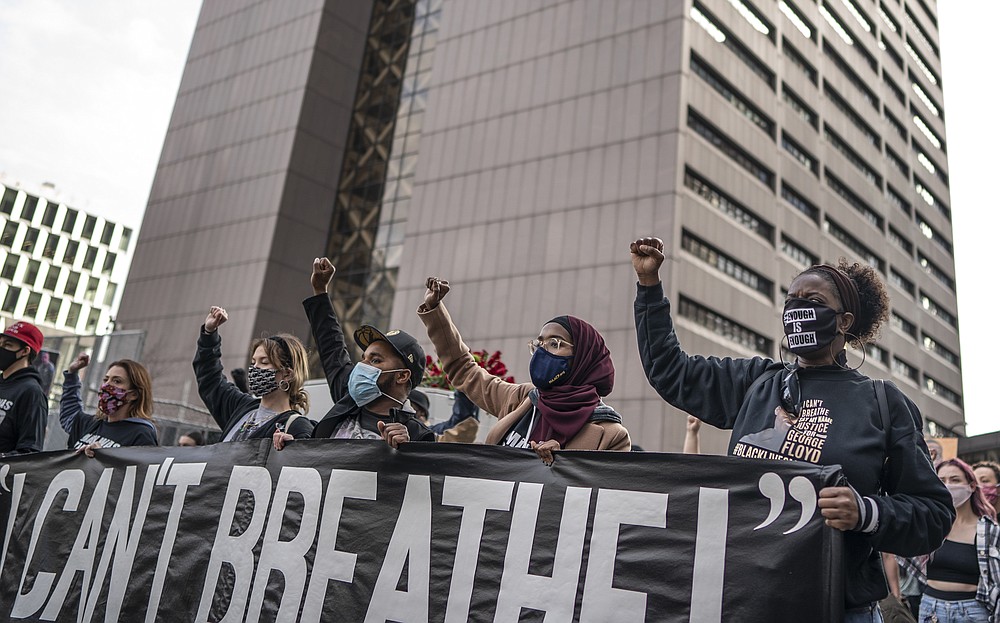 Demonstrators marched past the Hennepin County Government Center one day before jury selection is set to begin in the trial of former Minneapolis officer Derek Chauvin, who is accused of killing George Floyd Sunday, March 7, 2021, in Minneapolis, Minn. (Jerry Holt /Star Tribune via AP) 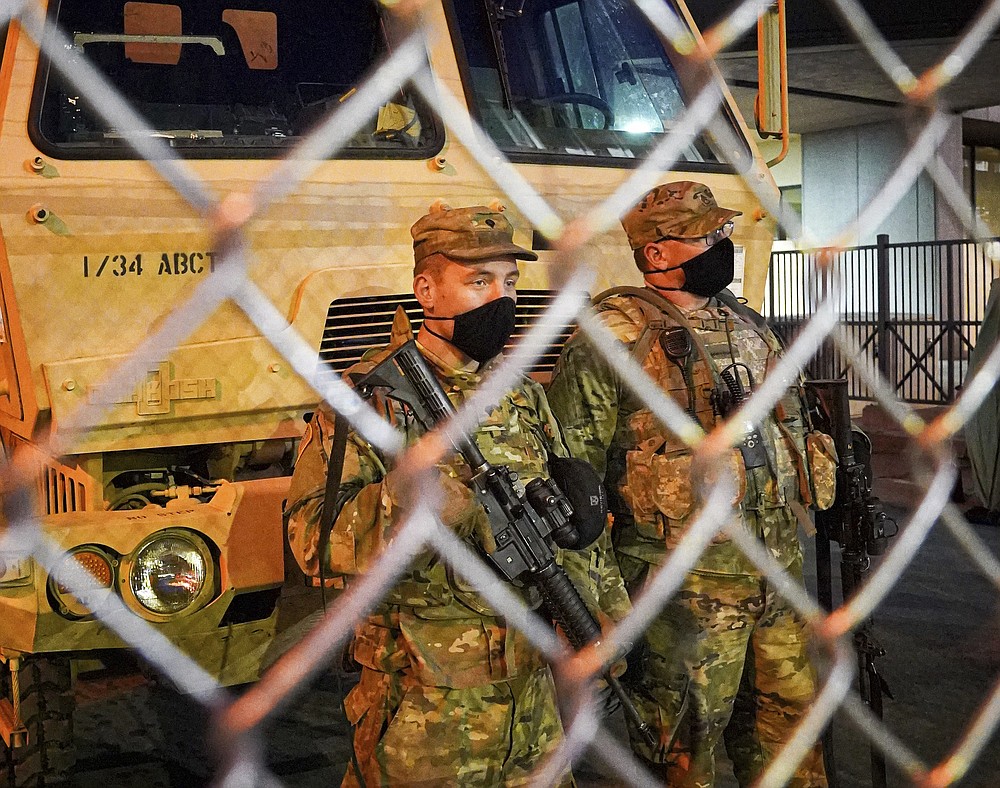 National Guard troops watch the pedestrian entrance Monday, March 8, 2021, at the Hennepin County Courthouse in Minneapolis, Minn., the site of the trial of former Minneapolis police officer Derek Chauvin in the death of George Floyd. (Glen Stubbe/Star Tribune via AP) 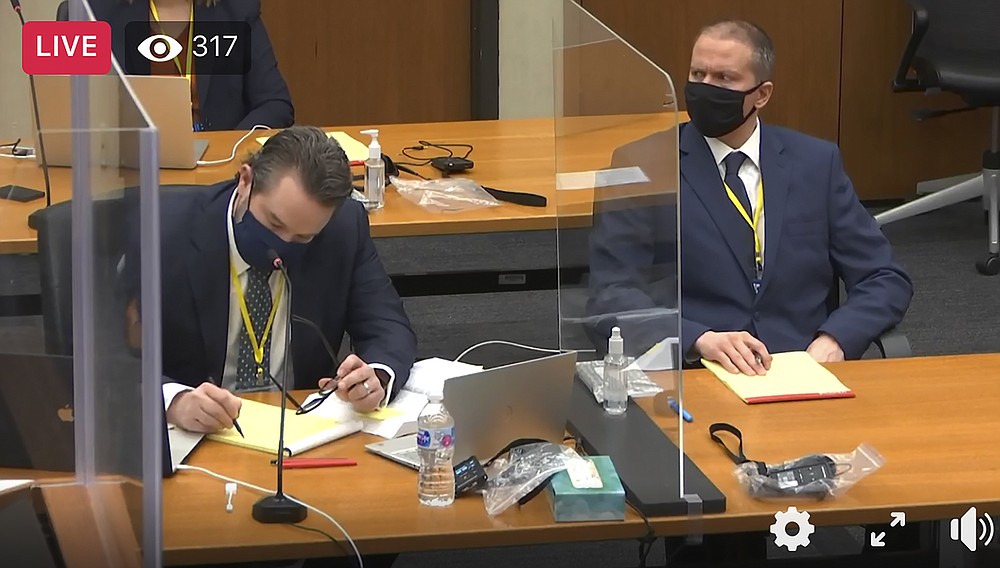 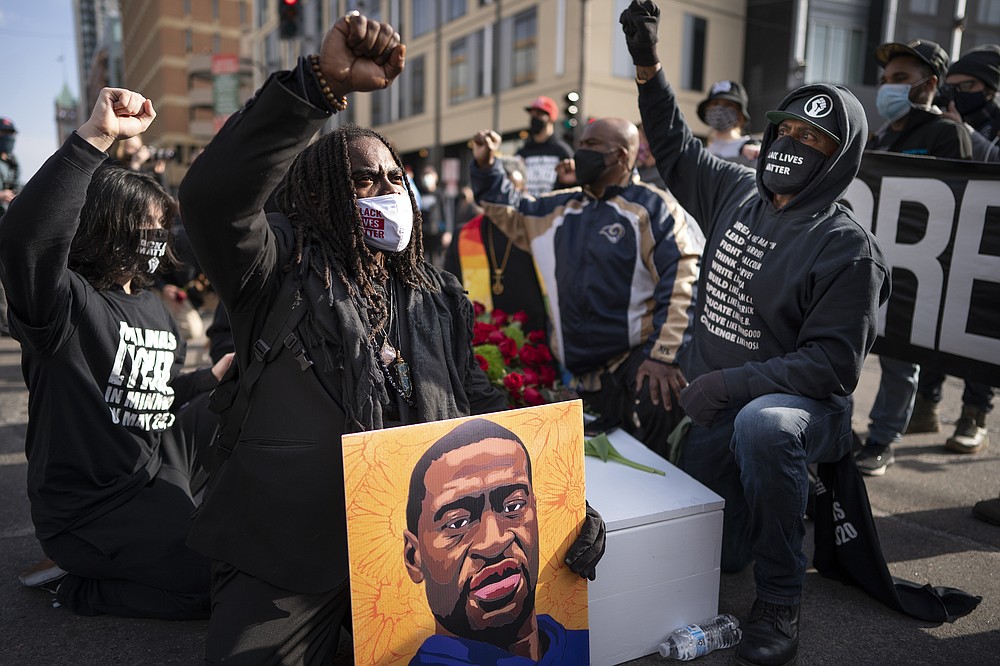 Cortez Rice, left, of Minneapolis, sits with others in the middle of Hennepin Avenue on Sunday, March 7, 2021, in Minneapolis, Minn., to mourn the death of George Floyd a day before jury selection is set to begin in the trial of former Minneapolis officer Derek Chauvin, who is accused of killing Floyd. (Jerry Holt /Star Tribune via AP) 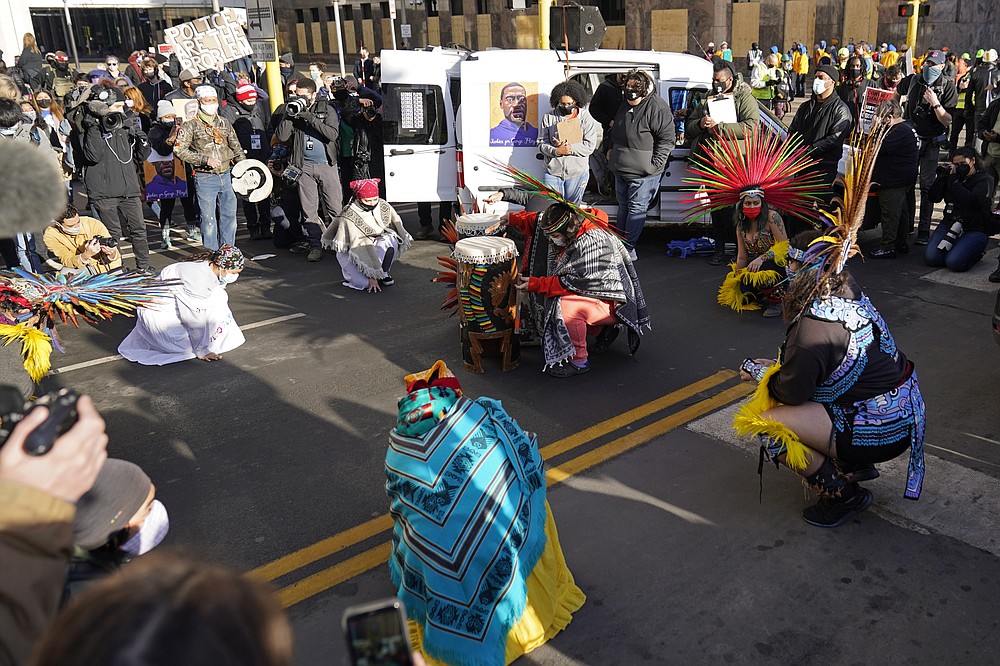 Dancers in native dress take part in a ceremony outside the Hennepin County Government Center, Monday, March 8, 2021, in Minneapolis where the trial for former Minneapolis police officer Derek Chauvin began with jury selection. Chauvin is charged with murder in the death of George Floyd during an arrest last May in Minneapolis. (AP Photo/Jim Mone) 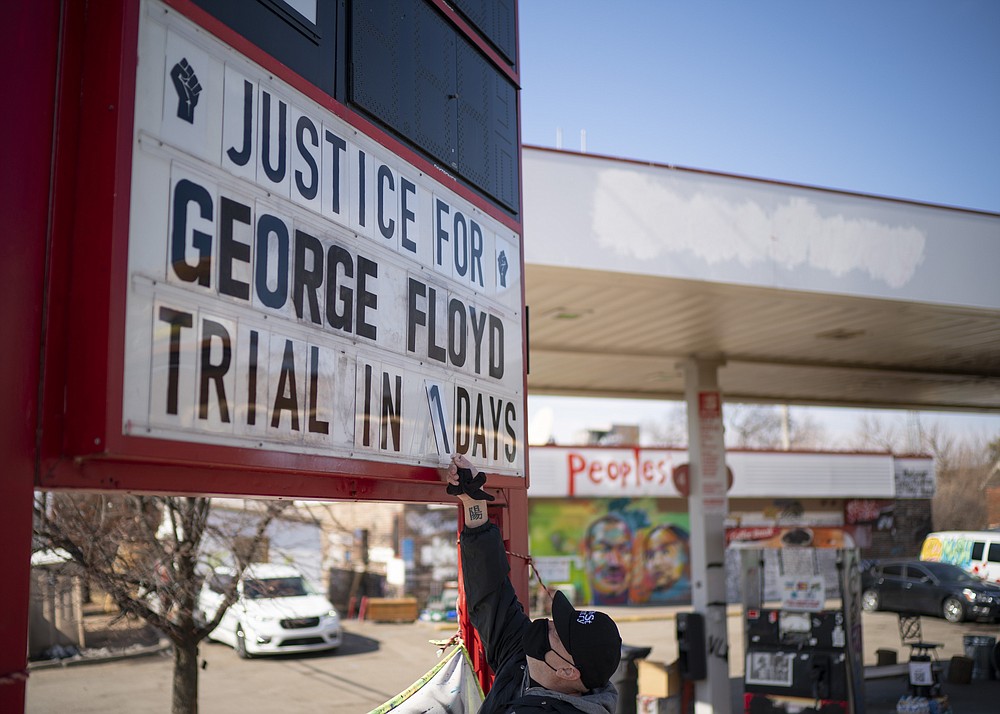 Billy Briggs, who lives just 170 steps from where George Floyd was killed, created and maintains the countdown sign at the gas station on the corner of George Floyd Square in Minneapolis, Minn. On Sunday, the eve of the trial date, he updated it to "1". (Jeff Wheeler /Star Tribune via AP)
ADVERTISEMENT