Patient-rights bill advancing on to Senate 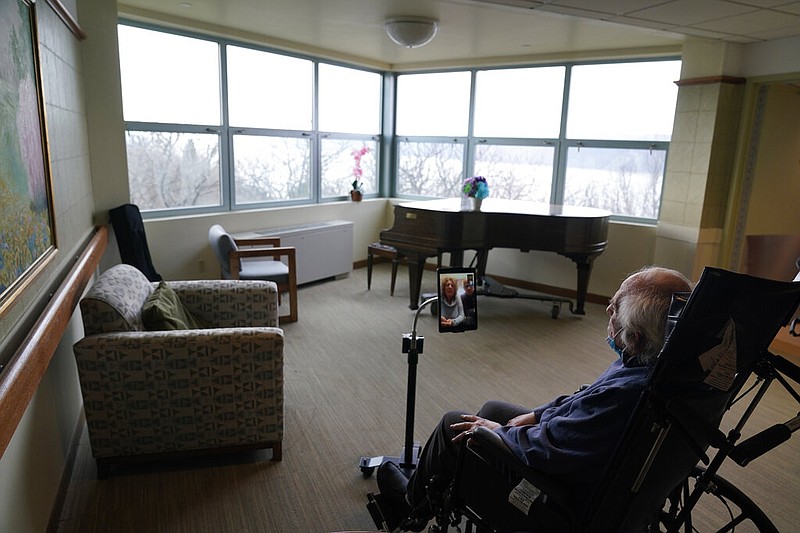 Jerry Woloz, 79, visits with family via a tablet at The Hebrew Home at Riverdale in New York in this Dec. 9, 2020, file photo. During the coronavirus pandemic, video and drive-by visits have been the only types available for most residents of nursing homes. (AP/Seth Wenig)

A bill to guarantee visits to lonely, pandemic-restricted patients has prompted more calls of support from constituents than any other, a Northwest Arkansas lawmaker said.

"I've had phone calls from constituents about this where we're both crying by the end," she said.

McKenzie co-sponsors House Bill 1061. The bill would guarantee limited visitation while also requiring precautions to prevent the spread of disease. The bill passed the House 91 to 0 Tuesday and is now before the Senate.

McKenzie heard from constituents for months whose loved ones died alone and afraid while families listened and tried to give comfort through a phone or video, she said. Other bills this legislative session on controversial topics have resulted in hundreds of emails from around the state and nation going to her, McKenzie said.

None of those, though, carry more direct appeals for support than HB 1061.

"It's hard to come up with anything sadder than people dying on their own," McKenzie said in a telephone interview Wednesday.

"We're happy about it," Bunch said of the bill.

"It is absolutely true the sponsors worked diligently with us," Tritt said. At one point she and Mayberry conferred daily, she said.

Professional health care providers were glad for a chance to draft a law letting some family members in while complying with tight federal guidelines, Mayberry said.

"What we've been through is one of the worst unintended human experiments in isolation," Mayberry said Thursday.

Her family members have had numerous surgeries recently, she said. She wouldn't have been allowed to stay in her daughter's room, for instance, had her daughter been two years older. At age 19, her girl could still be treated at Arkansas Children's Hospital, which allows a parent to stay.

Her daughter could have aspirated at any time during her frequent, unpredictable bouts of nausea and vomiting if a family member had not stayed in the room and turned her on her side when the nausea began, Mayberry said. Nurses and other health care providers do heroic work during the pandemic, she said, but no hospital is staffed to the extent a nurse can stay with a patient seven days a week, 24 hours a day. That is where family is needed.

Mayberry said her constituents have told her keeping a patient's will to live is a serious issue where there is no substitute for family. Family presence can make an extended illness bearable, she said.

"Or it can simply be a case where a patient's not eating, and a family member who knows what his favorite milkshake is from Sonic and will go get it for him," she said.

The 11-page bill includes specific provisions to keep abusive family members from exploiting the proposed law. Another provision allows up to three family members to stay one at a time with a patient with a disability that makes it difficult for the patient to cooperate with his medical team or make medical decisions.

The bill would ensure a parent can stay with a child during a treatment unless there is a medical reason to be apart, such as in surgery. It also requires visiting family members to comply with protocols to ensure against the spread of disease. In another provision, a patient would have the right to forbid family visitors from visiting in case that patient wants to avoid health risks to them.

The long, detailed discussions to craft the bill largely took place by video conference because of the pandemic, Mayberry said.

Tritt said the bill incorporated a great many lessons learned during the pandemic. One goes beyond the bill and applies to federal regulations, she said: the value of video communication.

"Health care providers talking to family members by video conference were all done by waivers," she said.

A great deal was learned about how to conduct such conferences and how to make them effective, she said. The knowledge gained could still be applied when family members such as sons and daughters are in other states or overseas, even when there is no pandemic, she said. Federal regulators should consider that, she said.

Bunch predicted the Arkansas bill would pass in the Senate, saying there was strong support and no opposition.

McKenzie also predicted the bill will pass the Senate.

"I'm sure they're getting the same calls from their constituents that we are," she said.