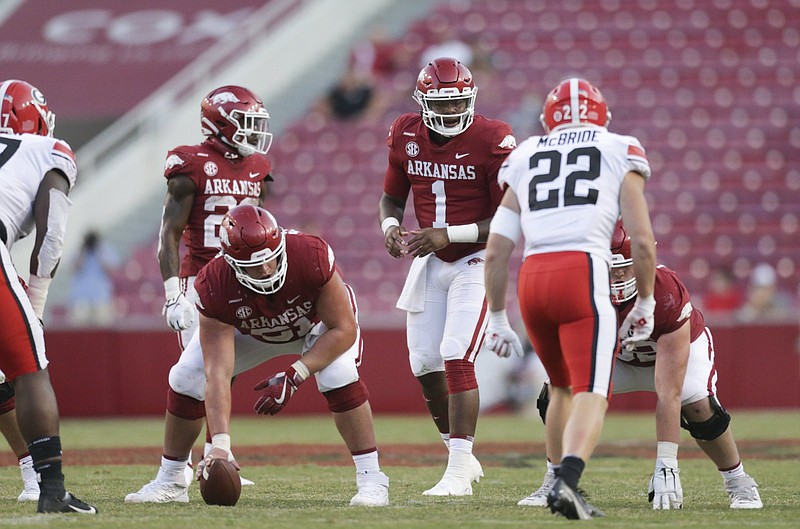 KJ Jefferson (1) is among three remaining scholarship returnees at quarterback for the Razorbacks, and his solid play in his lone start against Missouri puts him ahead of the competition for the starting job. (NWA Democrat-Gazette/Charlie Kaijo)

FAYETTEVILLE -- University of Arkansas fans might never have awaited the 15 work days of spring drills quite like the ones that start Tuesday on the practice fields at the Walker Pavilion.

The Razorbacks provided a glimmer of hope for better days last season with a 3-7 record in the debut of Coach Sam Pittman. On top of that, winter and spring sports are rocking and rolling across the UA campus, the weather is improving and the vibe on campus is sparkling with enthusiasm.

Let's not forget that 3-7 season came without the benefit of spring drills, which the Hogs were denied because of the onset of the covid-19 shutdown in mid-March the week before spring ball would have started. While the virus will still loom over this set of practices, the Razorbacks have had a full year to deal with the effects and changes during a pandemic. They have fared much better than many of their SEC brothers and sisters in that regard.

Now, back to that 3-7 record vs. all-SEC competition. Everyone knows it comes with an asterisk due to the officiating blunder at the end of the Auburn game, which denied what should've been back-to-back road victories vs. ranked teams. The Razorbacks lost two other games that could've gone either way, against LSU and at Missouri. However, they also won a pair -- at Mississippi State and vs. Ole Miss -- that were up for grabs in the fourth quarter, so that's a break-even deal.

What's certain was clear separation between Arkansas and the top two teams from each division: Alabama and Texas A&M in the Razorbacks' West Division, and Georgia and Florida from the East.

The SEC schedule-maker saw fit to give Arkansas both Florida and Georgia as its additional games, a mockery to the conference's stated goal of creating balanced schedules with the extra games. Arkansas and Tennessee were the only teams in the league to play all four of those top finishers. The Vols also went 0-4 but generally played those titans better than Arkansas did, but the Razorbacks beat Tennessee 24-13 head-to-head on Nov. 7 for their third consecutive win in the series. That is their longest current winning streak against any SEC opponent.

Arkansas fans would like to come out of spring drills thinking more progress is in store for a program that has not posted a winning record since going 7-6 in 2016, and had clearly fallen behind its league brethren from a talent standpoint.

Here are the top six questions facing the Razorbacks in spring drills:

1.) Who will win the starting quarterback job?

It's an open competition after the departure of nine-game starter Feleipe Franks.

However, KJ Jefferson excelled in his lone start at Missouri, which clearly qualifies him as having a leg up to start the competition.

Jefferson, Malik Hornsby and John Stephen Jones are the three remaining scholarship returnees. They will be joined by 6-2 signee Lucas Coley this spring, and 6-4 signee Landon Rogers of Little Rock Parkview in the fall.

Franks' impact in terms of leadership, as a stabilizing force and a deep-ball maven played a huge role in Arkansas' competitiveness in 2020. To be fair, he traded some big plays for a few more interceptions and sacks, and a few awkward scrambles after holding the ball longer than necessary.

Jefferson was 18 of 33 for 274 yards with 3 touchdowns and no interceptions while going the distance in a 50-48 loss at Missouri in his only significant action last year.

Jefferson and Hornsby cannot be judged on the goal-line packages they came in for in spot duty against Mississippi State and Auburn, respectively, as they were somewhat predictable. Jefferson could've made a better read by giving to Trelon Smith on an option play against the Bulldogs.

No doubt offensive coordinator Kendal Briles will have better sub packages next season.

2.) Can the Razorbacks create more pressure on opposing quarterbacks?

The lack of a consistent pass rush, even with blitzes, was a frustrating facet of last year's defense. It also played a role in changing out defensive line coaches, with Jermial Ashley replacing Derrick LeBlanc. Arkansas had 14 sacks in 2020, tied for the second fewest in the SEC behind Kentucky's 12. Losing tackles Jonathan Marshall and Xavier Kelly and end Julius Coates complicates matters further.

There are plenty of ends coming back, led but the quartet of Eric Gregory, Zach Williams, Dorian Gerald and Mataio Soli. The most experienced tackles returning are Isaiah Nichols, Taurean Carter and Marcus Miller. Either through improved schemes, better technique or winning more one-one-one battles, Arkansas must do a better job of rattling quarterbacks if its defensive numbers are to bump up.

3.) Who will join Trelon Smith among the primary ball carriers?

TJ Hammonds' decision to return for another run at his senior season provided a lift to this position group. He produced in the last three games after Rakeem Boyd opted out, particularly in the slot, but also in the run game. The coaching staff was high on true freshman big-back Dominique Johnson, a 6-1, 240-pounder, but he did not have a carry.

The hype is strong for incoming backs AJ Green and Javion Hunt out of Oklahoma, particularly Green, who was rated a four-star talent by three of the top recruiting services. Hunt is an early enrollee, so he stands to get a jump.

4.) Who could be impact newcomers?

Perhaps it's best to start with someone who was on campus last year. Transfer receiver Jaquayln Crawford has next-level speed, so if his route-running and hands are good, he could join De'Vion Warren as a "take the top off" kind of pass catcher. Warren will be limited in the spring after rehabbing from knee surgery.

The competition at receiver, behind established veterans Warren, Treylon Burks (51 catches, 820 yards, 7 TD), Mike Woods (32-619, 5) and Warren (15-278, 3) looks to be fierce. In addition to Trey Knox, who had a significant statistical drop-off in '20, the Razorbacks have redshirt Darin Turner and a big-time class of incoming talent in Ketron Jackson, Bryce Stephens, Jaedon Wilson and Raheim Sanders, a multi-position star who will begin at wideout. Jackson, Sanders and Wilson are ready to get started this week, so the competition will be on quickly.

There is a lot of returning talent among the back seven (or eight) on defense, so cracking the two-deep might be a challenge for incoming linebackers and defensive backs.

And how about kicker Cameron Little? The 6-2, 170-pounder is rated among the top four high school kickers in the country and has a chance to win the starting job.

5.) Will there be improved depth in the secondary?

After struggling in this department for years, Arkansas gave more players an opportunity last year, and coordinator Barry Odom and cornerbacks coach Sam Carter got a heap of good work, though the cornerbacks had some struggles down the stretch, particularly at Missouri.

LaDarrius Bishop emerged late in the year as a cover talent, so he could join Montaric Brown in giving the Razorbacks a pair of Ashdown natives as starters in the backfield. Greg Brooks Jr. made a big leap under the new coaching staff at nickel. Jalen Catalon and Joe Foucha were complementary safeties last fall, but can Simeon Blair and others provide quality relief and numbers for the extra-back packages?

Hudson Clark had a strong run at corner in the early going but got worked some in man defense later in the year. Clark, Khari Johnson and others should provide good depth.

6.) How will the new assistant coaches mesh into the team dynamic?

Pittman showed he could have a quick trigger with assistant coaches by changing out 40% of his staff after one year. Clearly recruiting is a high priority, and he went with younger, engaging guys.

Ashley's on-field task already has been discussed. He and the new linebackers coach Michael Scherer must connect with Odom and Carter and help the front seven target quarterbacks better and also improve against the run.

Cody Kennedy gets extra-year senior Blake Kern and highly rated sophomore Hudson Henry back at the top of his tight end room. His recruiting should be an asset, but moving over from the offensive line room, he'll have some adjusting to do. 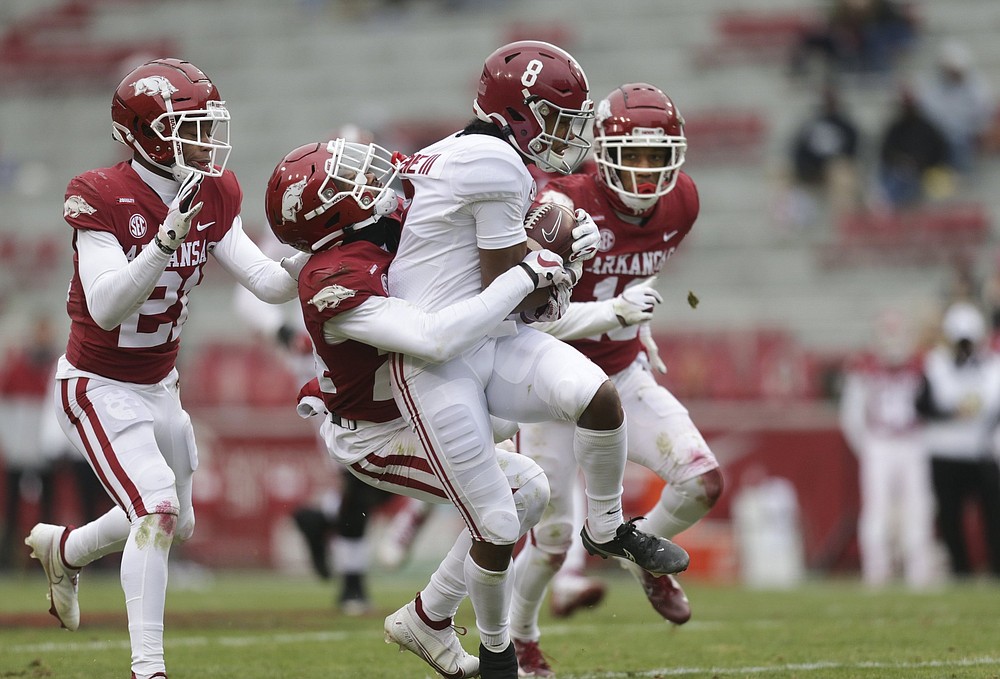 LaDarrius Bishop (24), here tackling Alabama wide receiver John Metchie in last year’s game, showed his skills as a cover talent late in the season and could be among the starters in the backfield. (NWA Democrat-Gazette/Charlie Kaijo)
ADVERTISEMENT