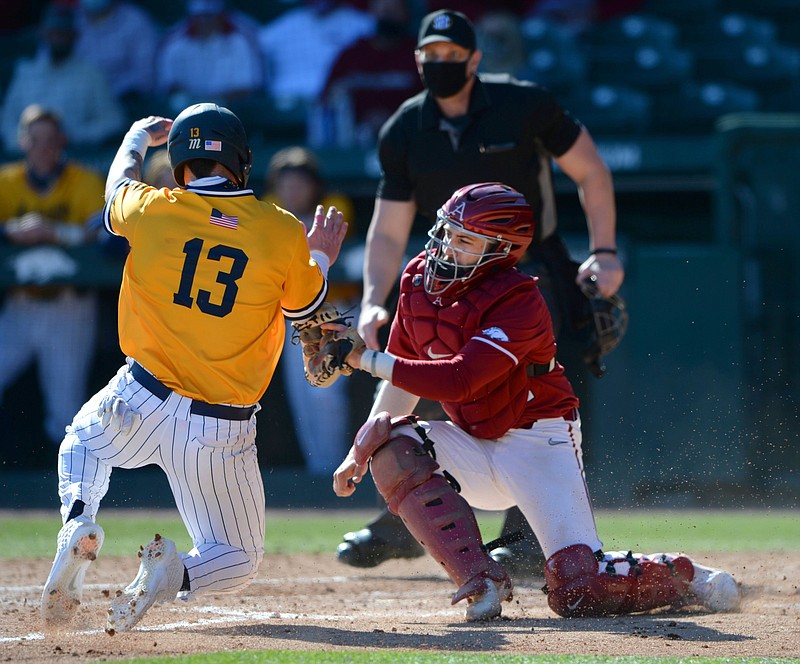 FAYETTEVILLE -- Another day, another comeback for college baseball's top-ranked team.

Arkansas overcame a four-run deficit Saturday to defeat Murray State 11-6 at Baum-Walker Stadium. The No. 1 Razorbacks (9-0) will go for a three-game sweep today at 1 p.m.

"We've really done a nice job of scoring runs and fighting back," University of Arkansas Coach Dave Van Horn said. "Our bullpen has done a tremendous job really this year ... where starters didn't give us more than a couple of innings, and we've had to go to the bullpen."

[Video not showing up above? Click here to watch » https://www.youtube.com/watch?v=NaMyHgXqilk]

The Razorbacks responded with three runs in the bottom of the second to cut the Racers' lead to 4-3. Cullen Smith pulled a three-run home run to right-center field to score Cayden Wallace and Brady Slavens, who doubled and walked.

Smith was sitting on a fastball from Murray State starter Sam Gardner and hit it near the top of the video scoreboard.

"I knew from watching film that this guy was a heavy fastball attack, heavy RPM guy," Smith said. "Honestly I was trying to stay through the middle ... and I was on time for it and drove it out of the ballpark.

"You never really hit home runs trying to hit home runs. Right there I was just trying to get the guys over so we can score some runs, and it just happened like that."

After Murray State extended its lead to 5-3 in the top of the fourth inning, the Razorbacks took the lead for good in the bottom of the fourth on a three-run double by Christian Franklin with two outs. Franklin hit a 1-2 fastball from Murray State starter Sam Gardner to the wall in the left-center field gap.

"That was a big-time at-bat for us," Van Horn said. "I would say Smith's three-run homer when we were down 4-0 was just as valuable, obviously, because we were in trouble right there.

"Franklin getting the big bases-loaded, two-strike, two-out double to clear the bases was big for us. Then it kind of threw the pressure back to them in their dugout."

Franklin went 3-for-4 with 4 RBI Saturday. He also had an RBI single in the sixth.

"The barrel was where I wanted it to be when I wanted it be there today," Franklin said. "That was a big key for me."

Arkansas hit a pair of home runs in the late innings to help pull away. Zack Gregory's solo home run to right field in the sixth inning gave the Razorbacks a 7-5 lead, and after Robert Moore singled and stole second base, Franklin drove him home with a single the opposite way.

"I love the way he went the other way with the single to right," Van Horn said. "It's good to see him get it going a little bit."

The left-handed Slavens added a two-run home run to the opposite field in the eighth inning to give Arkansas an 11-6 advantage. It was Slavens' team-leading fourth home run of the season.

Arkansas right-hander Blake Adams earned the win with 2 1/3 innings in relief of Bolden. Adams allowed 1 run on 3 hits and struck out 2.

It was the season debut for Adams, who was scheduled to pitch last Sunday when the Razorbacks' game against Southeast Missouri State was called after five innings.

"He did a nice job of holding them down for a couple of innings," Van Horn said, "slowing them down anyway, where we could kind of get our feet underneath us and score some runs."

Four Arkansas relief pitchers -- Adams, Caden Monke, Elijah Trest and Zebulon Vermillion -- combined to allow two runs in 7 1/3 innings Saturday. Trest allowed a run, but also prevented one in the sixth when he threw out Woosley at home plate as he tried to score on a tapper to the mound.

Vermillion, the team's No. 1 starter to begin the season, earned the save with 2 1/3 innings of scoreless relief.

Bolden struggled for the second straight start after earning SEC co-pitcher of the week for a relief appearance against Texas in the second game of the season. Bolden gave up 4 runs on 5 hits and 1 walk, threw 1 wild pitch and struck out 3.

Bolden nearly got out of the second inning with a 2-0 lead on a couple of occasions. A Slunder fly ball fell beside the right fielder Wallace in foul ground, and Slunder's double ricocheted off the glove of Smith at third base.

Gardner (0-2) took the loss for the Racers by giving up 6 runs on 4 hits and 4 walks in 3 1/3 innings. Gardner struck out four Razorbacks.

Arkansas has used 19 pitchers through nine games, with RHP Blake Adams from Springdale joining the group with 2 1/3 innings in relief of Caleb Bolden. …Christian Franklin took sole possession of the team lead with 11 RBI, one more than Brady Slavens, after driving in 4 on Saturday. … Cayden Wallace made a catch near the wall, then banged into it for the last out of the game on a blast by Bryson Bloomer. … The Razorbacks have five pitchers left with no ERA, led by Patrick Wicklander (6 IP), and including Jaxon Wiggins (3 IP), Evan Gray (1), Evan Taylor (1) and Matthew Magre (02/3 innings). … Arkansas had two attempted base stealers cut down, … Zack Gregory became the seventh Razorback to homer this season with his first career shot, a sixth inning solo home run. 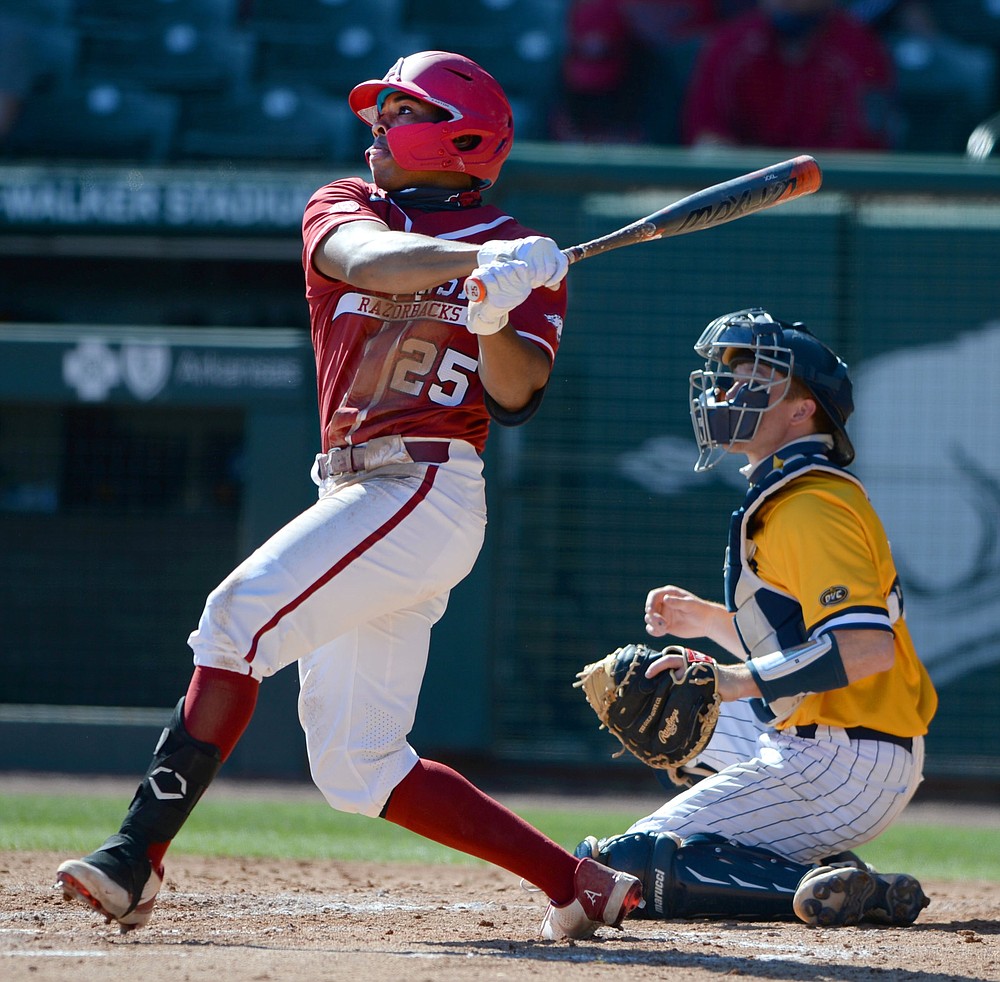 Center fielder Christian Franklin finished 3 for 4 with 4 RBI in No. 1 Arkansas’ 11-6 victory over Murray State on Saturday at Baum-Walker Stadium in Fayetteville. More photos at arkansasonline.com/37msuua/ (NWA Democrat-Gazette/Andy Shupe)
ADVERTISEMENT