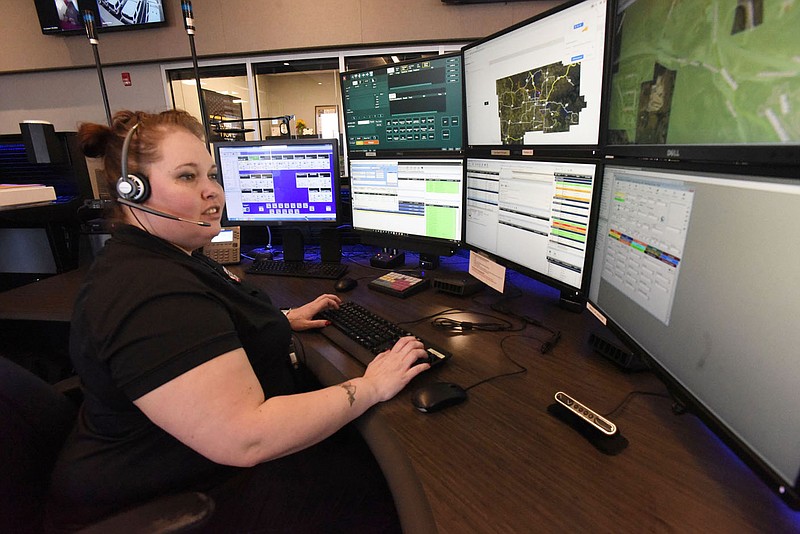 Desiree Beaver looks at information while on duty in the communications center at the Bentonville Police Department in this March 2, 2021 file photo. (NWA Democrat-Gazette/Flip Putthoff)

BENTONVILLE -- The city wants to replace an aging radio system and add training facilities for police and fire personnel as part of a bond issue.

The new radio system would improve interoperations and create multiagency communication on a shared radio channel, according to the city. The current system was bought in 2006, said police Capt. John Hubbard.

The police dispatch center received 69,239 calls for service and handled 76,464 calls with police and fire calls combined in 2020, Mayor Stephanie Orman said in her State of the City address.

The new radio technology would improve coverage in schools, hospitals, local businesses and throughout the city, according to a city website dedicated to the bond issue.

"Our current system has challenges with communication in large buildings, such as the Walmart Home Office, some of our schools, areas on the north end of town due to terrain issues," Hubbard said.

A needs assessment done in December by Tulsa Consulting services said the radio equipment is outdated, has been discontinued and the infrastructure is dilapidated. The assessment recommends a new system to include mobile and portable radios, dispatch consoles, tower sites, communication towers, training and maintenance.

The fire and police departments now use communications technology that no longer allows first responders to communicate with local, regional and state agencies, according to the city.

The new radio technology also would allow a partnership with the Arkansas Wireless Information Network. The statewide system allows responders to operate on the same radio channels in an emergency or as they travel throughout Arkansas, according to the city.

Interoperability means personnel in different cities, counties, the state and agencies within those jurisdictions can communicate with one another via radio during major events like a tornado or even a football game, Hubbard said.

As for the training structures, Bentonville is the only city in Northwest Arkansas without its own training facilities for emergency personnel, according to the city.

"Structural firefighting is a high-risk, low-frequency event," Deputy Chief Kevin Boydston said. "Conducting live fire training in an acquired structure is one of the most resource-intensive training exercises we undertake."

Smoke would be generated using a theatrical smoke system that is Environmental Protection Agency compliant with no harmful effects to the environment or firefighters, according to information from the city.

The Fire Department had two structures donated that were used for live fire training in 2020, along with an 18-unit apartment complex and the Decision Point building to do general fire/rescue training, Orman said in her State of the City address.

The department completed 46,299 hours of training in 2020, of which almost 75% was specifically in fire training, she said. The department has 102 firefighters who work three shifts, Boydston said.

The police training facility would include a virtual deescalation and judgmental use-of-force training simulator, a live outdoor range, a canine training area and a training building used to house range equipment. It also would be used as a bomb squad/special response team training area. The bomb squad covers Northwest Arkansas and into Missouri.

The simulator cultivates communication, decreases reaction time, induces physiological responses and works with many less lethal options not typically allowed on a live fire range, Simpson said. Each scenario has multiple branching options as it unfolds based on the training objectives and the decisions made by the officer, Simpson said.

It also immerses officers in a constant training program, creating a log of how many hours each officer spends on this training, to include topics such as routine patrol, traffic stops, disturbances, contacts with residents, autism awareness, mental illness, hostage situations and deescalation techniques. The simulator allows up to three officers at a time to use it and consists of five screens with 4k technology, Simpson said.

The 100-yard outdoor range would be constructed on 20 acres that the city owns.

Eighty percent of the revenue raised by the city's 1% sales tax goes to repay bonds and 20% goes to ongoing capital needs. The city would maintain the same ratio if the sales tax is extended, according to Jake Harper, city director of finance and administration. 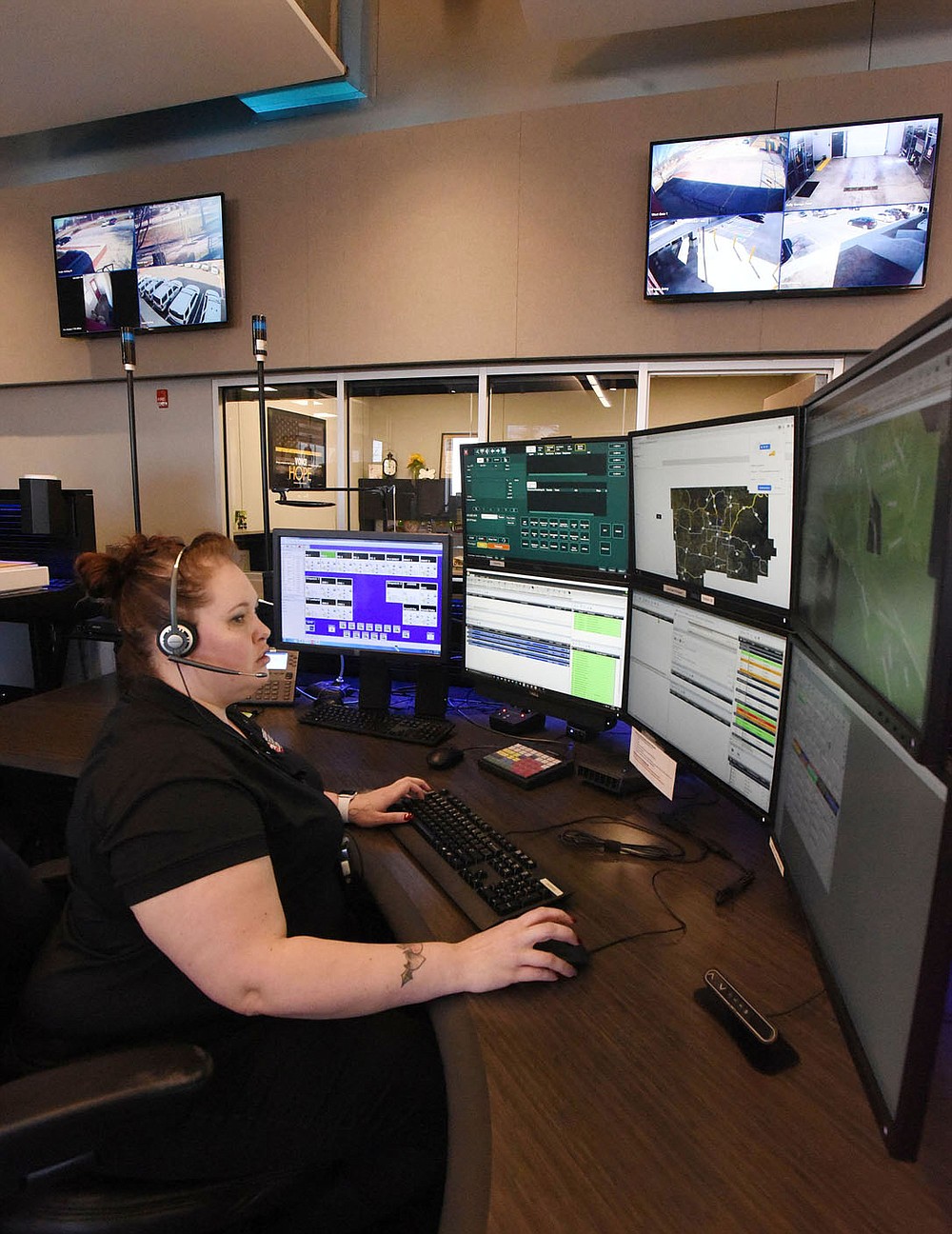 Desiree Beaver looks at information while on duty Tuesday March 2 2021 in the communications center at the Bentonville Police Department. A new radio system for the department is part of a $266 million bond issue residents will vote on on April 13. (NWA Democrat-Gazette/Flip Putthoff) 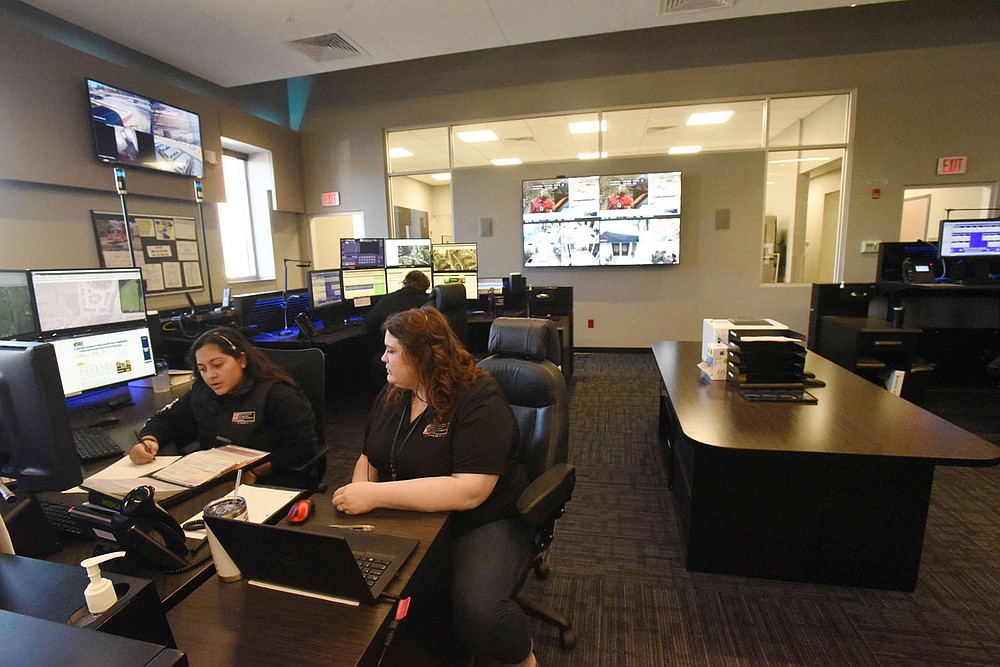 Amanda Aristondo (left) and Kiersten Hayes (both cq) go over data on Tuesday March 2 2021 while on duty at the Bentonville Police Department communications center. A new radio system for the department is part of a $266 million bond issue residents will vote on on April 13. (NWA Democrat-Gazette/Flip Putthoff) 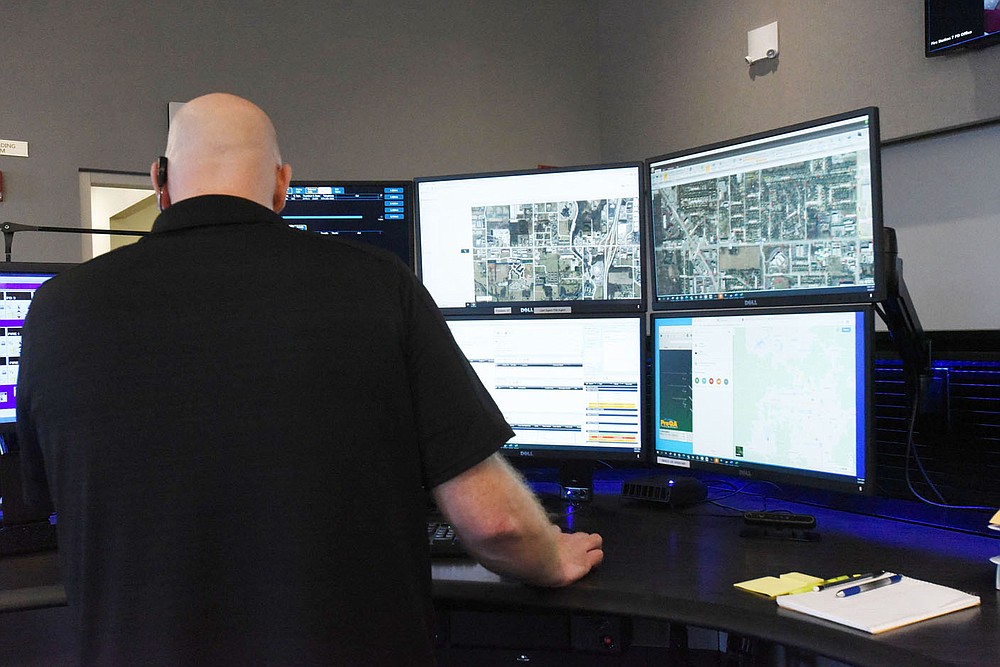 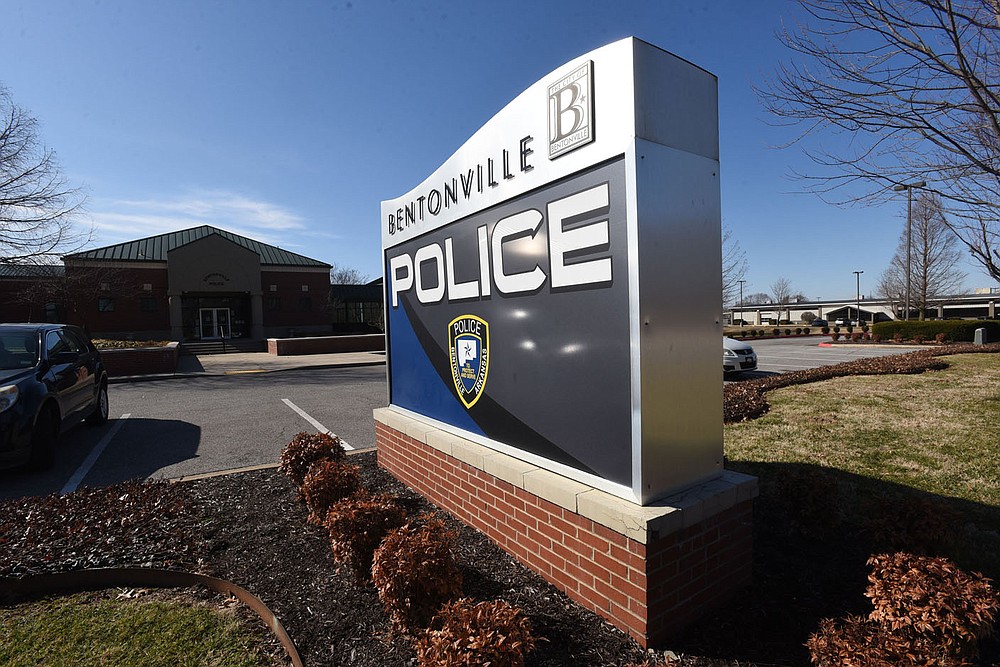