OPINION | CRITICAL MASS: Nostalgia is realization that we can never go back 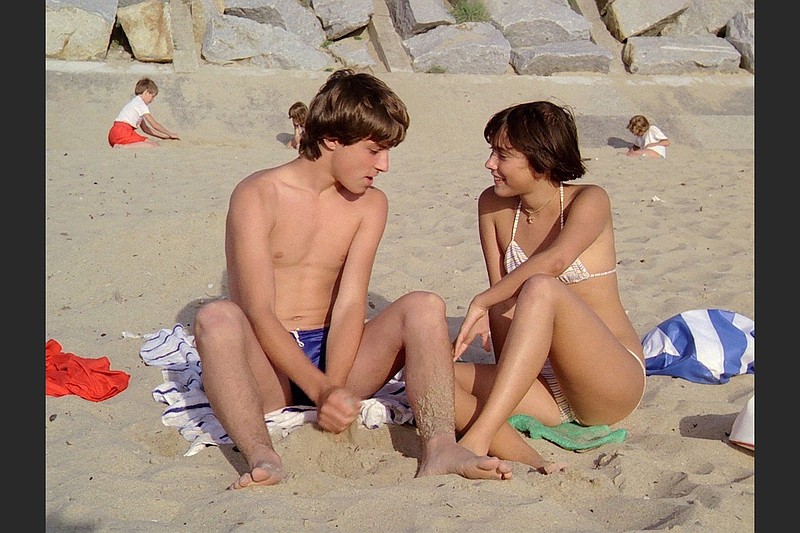 Nostalgia is often dismissed as a cheap and superficial emotion — a longing for an idealized past that never was. We often receive the past as a kind of theme park dedicated to the Good Old Days, where everyone could be happy if they'd accept the wisdom of the assumptions of the paternalistic powers that be.

Lately, '80s nostalgia has been Baader-Meinhof-ing its way into my world.

I'm currently leading a film discussion class for the LifeQuest of Arkansas continuing-education program, and one of the films I selected to screen was Oliver Stone's "Platoon," the 1986 film that was the first movie I ever professionally reviewed. And last week, I screened for the group Samuel Fuller's 1981 movie "White Dog," a seldom-seen relic of the era that feels simultaneously prescient and antique.

On Feb. 23, Paramount Home Entertainment released the "John Hughes 5-Movie Collection," which features "Ferris Bueller's Day Off," "Pretty in Pink," "She's Having a Baby," "Planes, Trains and Automobiles" and "Some Kind of Wonderful." All were released between January 1986 and February 1988.

Then, a couple of weeks ago, I was contacted by a fellow writer who periodically conducts international polls of film critics. He asked me to provide my unranked list of the 10 best movies of the 1980s. I scribbled out a list in 10 minutes and sent it back to him, which got me musing about one of my least favorite decades for Hollywood movies. 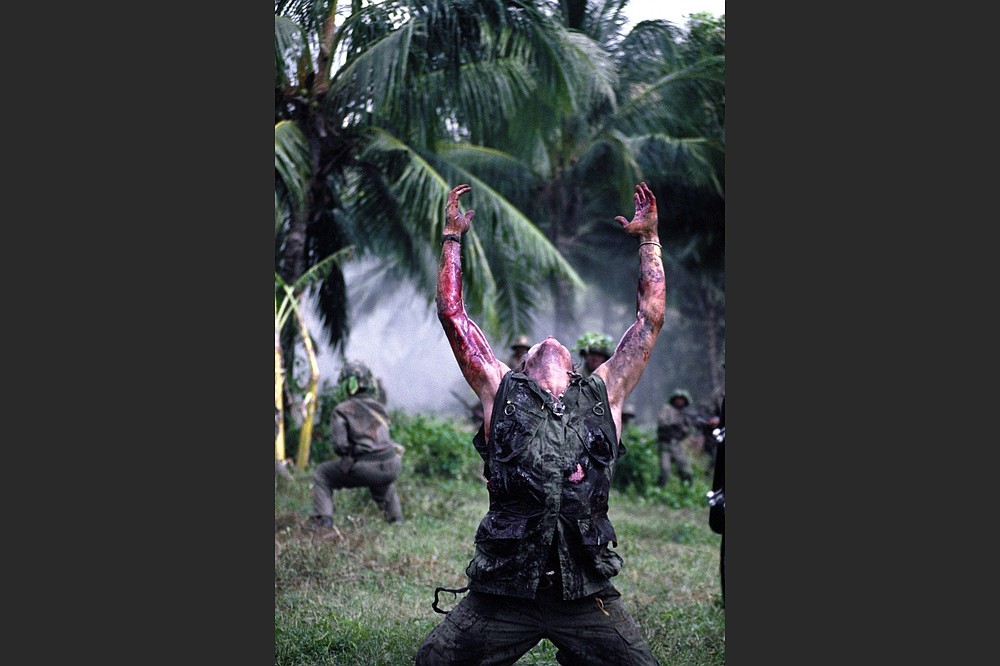 Nostalgia is one of the ways we remember. Isaac Lee Chung's "Minari," a memory play about the summer of 1980 when his Korean immigrant family moved to rural Northwest Arkansas, could be said to be nostalgic — the filmmaker is looking back on his childhood, filtering the story through the consciousness of a stand-in for his 7-year-old self. The '80s of "Minari" looks and feels more authentic than the '80s presented in "Stranger Things" or "Wonder Woman 1984," but it's not any less nostalgic.

Nostalgia is a kind of ghost pain — an ache that shouldn't be there, that accompanies a broken connection to past lives. You can't be genuinely nostalgic for a time before your own, though people dress up and attend Creative Anachronism fairs (or at least they did before the pandemic — itself a paler, duller analogue to ancient and more romantic plagues — drove us into Zoom meetings and Google hangouts).

Nostalgia for an era kicks in after a couple of decades; in the '70s there was a '50s kick, with movies like "American Graffiti" (1973), "The Lords of Flatbush" (1974), "Grease" (1978), "The Wanderers" (1979), etc. "American Graffiti" beget the TV shows "Happy Days" — which imported Henry Winkler and the prototype for his Fonzie character from "The Lords of Flatbush" — and later "Laverne & Shirley." Doo-wop group Sha Na Na performed at Woodstock.

Nostalgia as a cultural staple of the 1950s has never gone away, but peaked in the mid- to late '80s with "Back to the Future" (1985), which is also about the time that '60s nostalgia became ascendant in our pop culture.

People should love what they love for whatever reasons they love it. It's not interesting to argue about matters of taste — but is interesting that so many mainstream Hollywood films from the decade seem to have such currency.

Part of the reason so many '80s films — like "Ferris Bueller's Day Off" and "The Breakfast Club" (probably John Hughes' best film) seem to take up so much space in our culture right now is that people who were teenagers in the '80s are middle-aged, finding themselves on boards and running businesses in positions of responsibility. They get to set agendas and call shots and program film festivals. So the movies — and the music and the TV shows and all other aspects of pop culture — that they liked when they were 12 years old have now been re-assessed.

But the '80s is not a great period for the sorts of movies film critics love. Quentin Tarantino calls it the "worst decade" for American films. The general consensus is, it was a decade when Hollywood re-asserted itself, pushing away from the more cerebral director-driven films of the 1970s (think "Five Easy Pieces") and toward studio-built blockbusters.

Measuring by box office receipts, Harrison Ford is the biggest star of the decade; Eddie Murphy, Sylvester Stallone, Tom Cruise and Dan Aykroyd round out the Top 5. Steve Guttenberg is sixth; a woman doesn't appear on the list until Dolly Parton, in 11th place. (If you Google "biggest female star of the '80s" you'll get Jane Fonda, Sigourney Weaver, Kathleen Turner, Debra Winger and Sally Field.)

The cinema of the '80s is body-obsessed and visceral as opposed to the more intellectual, more psychologically driven films of the '70s. The '70s could support Elliott Gould as Philip Marlowe; the '80s gave us Stallone as John Rambo. In 1973, even Dirty Harry Callahan (Clint Eastwood) goes after villains practicing Rambo-style vigilantism.

The '70s belongs to auteurs and actors — Gene Hackman, Robert De Niro, John Cazale. The '80s saw the return of the movie star Arnold Schwarzenegger and Tom Cruise. Hollywood had a new strategy, borne of the blockbuster success of "Jaws" (1975) and "Star Wars" (1977). Carpet-bomb the world with a movie, saturate the cineplexes. Put outrageously beautiful people in high-concept movies that are more about feeling than thinking, that can cut across cultural divisions and language barriers.

Overtness in the movies isn't my favorite thing.

But there are some remarkably specific '80s movies made by some very weird minds. Take Terry Gilliam's "Brazil" (1985), Michael Mann's "Thief" (1981), William Friedkin's "Cruising" (1980), Martin Scorsese's "After Hours" (1985)," Ridley Scott's "Blade Runner" (1982). All seem highly representative of what we could call the "1980s' aesthetic" — literally and psychologically dark films that seem the product of a singular authorial vision.

Which leads me to the list I alluded to earlier — my list of the best movies of the '80s. Here's what I came up with:

Even as I type these movies out, I don't believe in the list.

"White Dog" isn't going to make too many critics' lists. I'm not sure it's even good, just an interesting movie to talk about, none too artfully packed with ideas. Fuller is not a subtle director, and the movie's backstory (which involves Jean Seberg, her novelist husband Romain Gary, the Black Panthers, Roman Polanski, and Paramount Studios looking for a cheap "Jaws with Paws" to rush into theaters in advance of an impending writers's strike) is actually far more interesting than what's on screen.

But then, a movie is not just what fits in the frame; a movie is what blooms in your head. So I could make a case for "White Dog."

"Platoon" is a sentimental choice. It's defensible. Stone knows how to communicate with a camera.

I feel bad there are no female directors represented in my list — I could have opted for Penelope Spheeris for 1981's "The Decline of Western Civilization" or 1984's "Suburbia" or could have gone full contrarian and picked Martha Coolidge's "Valley Girl," which I genuinely love — but probably should have put Agnes Varda's 1985 film "Sans toit ni loi" (which you can sometimes find under the title "Vagabond") on the list.

"Do the Right Thing," "Raging Bull" and "Fanny and Alexander" would be on my list no matter what, but all the others feel arbitrary — they're movies from the 1980s that are really good. Most I've had occasion to write about; I reviewed all the post-"Platoon" entries on the list when they opened theatrically.

"Pauline at the Beach" may not be my favorite Rohmer film of the '80s; that might be 1986's "The Green Ray," which was released as "Summer" in North America. (It's available for streaming on The Criterion Channel as "The Green Ray.")

But "Pauline" — the third in Rohmer's six-film "Comedies and Proverbs" series — may be his most influential film; both 2001's "crazy/beautiful" and Noah Baumbach's "Margot at the Wedding" from 2007 visually quote the film, and its superficially frothy tone conceals both deep compassion and sadness.

It's your basic French sex farce deconstructed: Marion, a woman awaiting the finalization of her divorce, retreats to her family's house in Normandy with Pauline, her 15-year-old niece, in tow. As Marion disingenuously entangles herself with two would-be lovers, Pauline rejects the adult complications her aunt accepts as an inherent part of the game.

Rohmer's position on the subject might be surmised by the proverb he chose as the movie's epigram: "He who talks too much will hurt himself."

I limited myself to one film from each director, though I'm not really sure I prefer Scorsese's "Raging Bull" to his "After Hours" or Wenders' "Wings of Desire" to his "Paris, Texas."

"Do the Right Thing" and "Platoon" are likely to remain on any list of good-to-great '80s films I prepare, but only because I've written and thought so much about them over the years that I'm unlikely to forget them.

Stone's "Salvador" is a film I like more now than when it was released, and Lee's "She's Gotta Have It" is arguably a more important film than "Do the Right Thing."

Similarly, I could have chosen Cronenberg's "Dead Ringers" (1988) or "The Fly" (1986) over "Videodrome" and I've got an untested hypothesis that, apart from "The Shining" (which deserves its own discussion), Cronenberg's "The Dead Zone" is the best film adaptation of a Stephen King work. 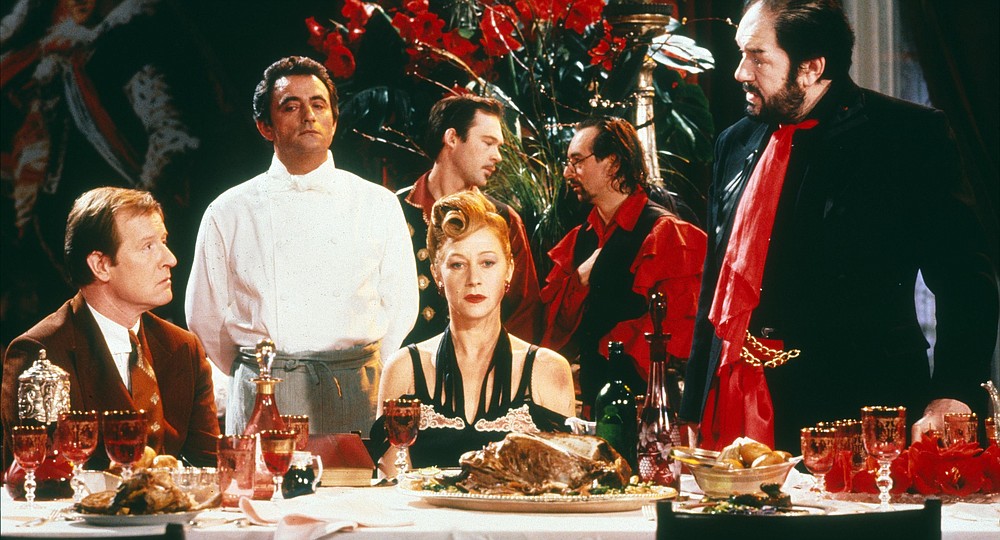 Alan Howard, Richard Bohringer, Helen Mirren and Michael Gambon star in “The Cook, the Thief, His Wife & Her Lover.”

"The Cook, the Thief, His Wife and Her Lover" is the most genuinely obscure movie on the list ("White Dog" is famous for being obscure) but I saw it in a Little Rock cineplex and reviewed it for an alternative newspaper, so how obscure could it be?

Aside from "White Dog," the only one I saw more than a few weeks after it first opened in theaters — which means the only one I first saw after it had been enshrined as "a great film" — is Bresson's "L'Argent" (now streaming on The Criterion Channel). Knowing that a movie has obtained a critical reputation almost never enhances the experience, but "L'argent" is special in that, despite its unmistakable aspiration to art based on the Tolstoy story "The Forged Coupon," it tracks a counterfeit 500-franc note as it passes from hand to hand, wreaking moral havoc on those who pass it on.

Bresson was a minimalist, paring down every shot and scene to its barest essence, and to this end employed non- actors who recite their lines without affect. It's a very different experience from watching "Risky Business" or "À bout de souffle" and demands of the audience both hyper-attentiveness and a certain willingness to engage with the filmmaker.

For people with no direct experience of an era, pop culture artifacts are fossils from which we might surmise certain things. While we can watch TV shows and movies from the era, we have no passport to the past. Not even a past we lived through. Nostalgia is the bittersweet realization that we can never go back.

We are like spacewalking astronauts realizing the tether that bound us to our ship has snapped. We've no choice but to keep drifting farther and farther into the unknowable future.

As improbable as it seems, someday we'll look back on all this and long.