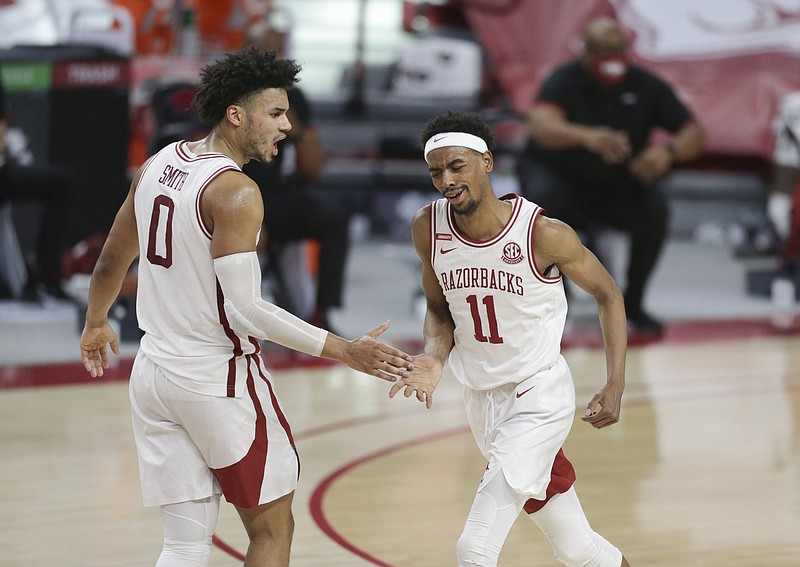 Arkansas guard Jalen Tate (11) is congratulated by teammate Justin Smith after a basket during the second half of the Razorbacks’ victory over Texas A&M on Saturday at Walton Arena in Fayetteville. Tate scored 22 points and Moses Moody had 28 as the Razorbacks won their 11th consecutive SEC game. More photos available at arkansasonline.com/37tamua. (NWA Democrat-Gazette/Charlie Kaijo)

FAYETTEVILLE -- The Aggies were no joke.

Texas A&M, playing just its second game since the end of January because of coronavirus issues within its program, pushed the No. 12 University of Arkansas men's basketball team to the limit Saturday.

But the Razorbacks found a way to pull out an 87-80 victory at Walton Arena after trailing for more than 29 minutes, including with less than a minute to play.

It was the 11th consecutive SEC victory for Arkansas (21-5, 13-4) to match the regular-season streak of the 1994 national championship Razorbacks.

"A general fan just doesn't understand how hard it is to win 11 games in a row in league play," Razorbacks Coach Eric Musselman said. "Trust me, it's difficult. To win on the road, to win with travel, to win at home, to not have a letdown. It's hard to do.

[Video not showing up above? Click here to watch » https://www.youtube.com/watch?v=vc8b1PMapMM]

"Did we play great tonight? No. We played well enough to win."

After Savion Flagg hit two free throws to give the Aggies a 78-76 lead, Moody's three-pointer with 56 seconds left put Arkansas ahead 79-78.

Davonte "Devo" Davis then made a steal -- deflecting Flagg's inbounds pass to teammate Jalen Tate, who got it back to Davis for an assist on a Justin Smith dunk that made it 81-78 in the Razorbacks' favor with 41 seconds left.

"Man, Devo is a playmaker," Tate said. "He does everything to make as many plays as he can every single night. I love that he's on our side.

"He's a luxury to have. For him to be his age [a freshman] and to be making the plays he's making, it's definitely something special."

Musselman said he wanted the Razorbacks to be aggressive defending the inbounds play.

"We were willing to gamble a little bit rather than just play back and concede an inbound pass," Musselman said. "We wanted to try to make them play a little under duress.

"There's a little bit of a gamble with that, just because of the fact that they were in the bonus and we didn't want to foul. Sometimes you can be overly aggressive when you're trying not to allow an inbounds pass."

The game was far from over.

After a timeout, Texas A&M senior guard Quenton Jackson got an open look on a three-point attempt form the corner but missed with 27 seconds left. Jackson was 5 of 7 on three-pointers before that miss, which would have tied the game.

"It was a good shot, and it was the shot we wanted," Aggies Coach Buzz Williams said.

Arkansas junior guard JD Notae hit 4 of 4 free throws in the final 25.3 seconds, and Davis made a steal and dunk with four seconds left to finish it off.

"I have a lot of respect for the Aggies," Moody said. "They played a great game. They came out and gave us their best shot.

"Just glad we were able to have a bad game and still come out with the win."

Tate, a senior guard coming off a 1-of-5 shooting game at South Carolina, bounced back Saturday with 22 points, 7 rebounds and 4 assists.

"Find a way every single game," Tate said of the Razorbacks' mindset. "At this point, it's March. You've got to continue to do that as long as you can if you want to get to the goals that the 1994 team did. But we're not going to talk about that until we get there."

Smith, a senior forward who like Tate is a graduate transfer, had 11 points. Davis had 12 points, 6 rebounds, 5 assists and 2 steals. Notae had 9 points, 4 rebounds and 3 assists.

Arkansas cut the Aggies' lead to 41-38 at halftime on Moody's driving basket with a second left in the half.

"They've got fresh legs, I can tell you that," Musselman said of the Aggies' 32-day layoff between games before they lost to Mississippi State 63-57 on Wednesday night. "Their bench stood the whole game.

"I mean, they were fired up to play the game. When you're ranked in the top 12, that's going to happen. You have a target on your back.

"I'm going to assume Monday we'll be ranked in the top 10. So with that comes responsibility, and the opposing team has a little bit extra motivation. They missed a month of basketball, and you could see the energy level they had."

"You want to play at a high, high level all game, but I did think we turned it up that last minute-and-a-half, especially from a defensive standpoint," Musselman said. "We took our game to another level from an intensity standpoint and an aggressive standpoint defensively."

The game was tied 76-76 when Moody blocked a dunk attempt by Jackson with 1:30 left.

Moody said he had to make a play on defense when the Razorbacks needed it.

"If he would've dunked on me, then momentum would have shifted tremendously," Moody said. "So I had to get it."

Moody hit 9 of 15 shots, including 5 of 8 three-pointers, against Texas A&M's zone defense.

"I guess all shooters know we love zones," Moody said. "There were a lot of late closeouts, and the shots were just there. They were open, so I just took them and a lot of them fell." 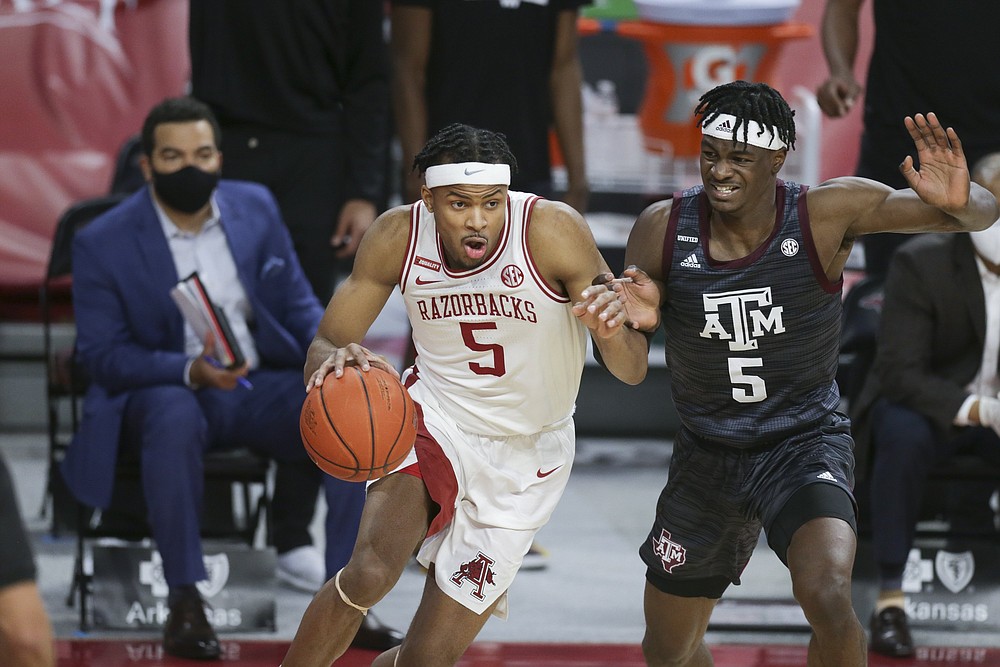