At D.C. hearing, riot suspect rails at stay in lockup 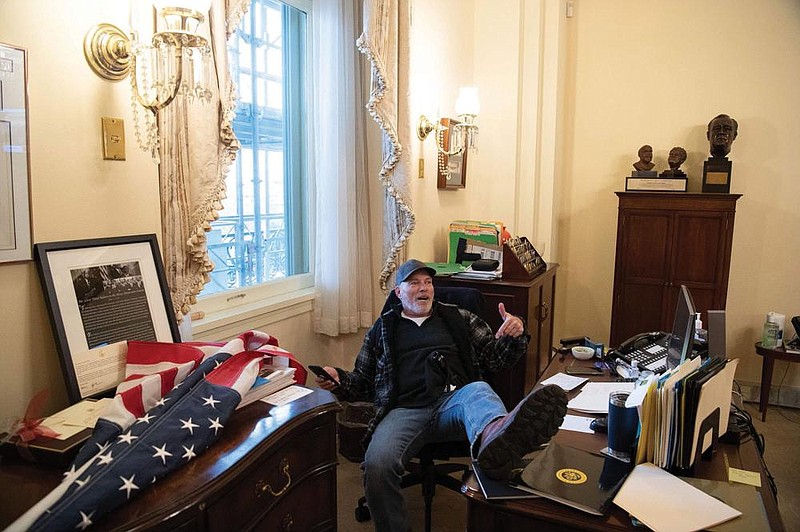 Richard “Bigo” Barnett of Gravette sits inside the office of House Speaker Nancy Pelosi during the Jan. 6 insurrection at the U.S. Capitol. House impeachment manager Stacey Plaskett said the world is now “all … too familiar with the images” of Barnett in Pelosi’s office. (AP/AFP/Getty Images/Saul Loeb)

WASHINGTON -- A Gravette man charged in the Jan. 6 storming of the U.S. Capitol expressed frustration with his continued confinement Thursday, noting that others facing charges already have been released on bond.

During a status teleconference on his case, Richard "Bigo" Barnett told the court that he's dissatisfied with his detention and the pace of the proceedings.

"They're letting everybody else out," he said, later adding, "I need help. I need help."

Barnett, 60, is one of more than 300 people awaiting trial on accusations of taking part in the assault on Congress.

During the insurrection, he was photographed with his feet propped on a desk in House Speaker Nancy Pelosi's office. After exiting the Capitol, he held aloft an envelope he had taken, telling protesters and reporters what he had done inside.

Prosecutors say he was armed with a stun gun during the riot.

Thursday, after discussing discovery and approving a change of attorneys, U.S. District Judge Christopher Cooper attempted to schedule another status conference, asking if May 4 would work.

The date was satisfactory to the attorneys, but not Barnett, who has been locked up since Jan. 8.

"Your honor, I'm sorry. I need a sidebar with my counsel. That doesn't work for me," Barnett said.

One of his new attorneys, Steven Metcalf of New York City, urged his client to "just hang tight," offering assurances that the May 4 date wouldn't affect any application for bail.

That didn't satisfy the defendant.

"I understand, but I've been here a long time," Barnett said. "I don't agree with this date. It's not fair."

After Cooper paused the proceedings so that Barnett could discuss matters with his attorneys, Barnett realized he had given his lawyers the wrong telephone number to call him in jail.

"Hey, are y'all there?" Barnett said, still audible to some on the conference call, who could hear Barnett but not talk to him. "I gave you the wrong number. Is anybody there?"

After there was no response from his attorneys, Barnett said "S * * * . Now I'm screwed. ... This is a big bunch of crap. Everybody else that's worked as hard as me is already home. They're toying with me. Now they're trying to push me out another month on a f * * * * * * bail hearing."

Once court resumed, all sides agreed to hold the next status conference on May 4, as originally proposed.

Arrested in Arkansas, Barnett was initially charged with knowingly entering or remaining in a restricted building or grounds without lawful authority; violent entry and disorderly conduct on Capitol grounds; and theft of public money, property, or records.

If convicted on those counts, he would have faced a maximum of one year's imprisonment, U.S. Department of Justice officials said.

In Arkansas, given the charges, Barnett's ties to the community and other factors, Chief Magistrate Judge Erin Wiedemann planned to place him under house arrest.

Federal prosecutors objected, persuading Chief Judge Beryl Howell of the U.S. District Court for the District of Columbia to stay the motion.

After a weekend in the Washington County jail, Barnett was taken into the custody of U.S. marshals and transported to the nation's capital.

He's also charged with obstructing an official proceeding and aiding and abetting; entering and remaining in certain rooms of the Capitol; disorderly conduct in the Capitol; parading, demonstrating or picketing in the Capitol; and theft of government property for absconding with the envelope.

During Thursday's status conference, a prosecutor said Barnett faces a potential sentence of 20 years in prison and a potential fine of $250,000 if convicted.

Absent a "deadly or dangerous weapon," the penalties would have been less severe, a federal prosecutor told the court.

The initial defense attorney in the case, Anthony Siano of White Plains, N.Y., is departing.

The new legal team is made up of New York attorneys Joseph McBride, Metcalf and Martin Tankleff.

Tankleff served 17 years in prison after being convicted of killing his parents. With new evidence presented, his conviction was thrown out and he was freed. New York state paid $3.4 million and Suffolk County paid $10 million to settle lawsuits relating to his arrest and imprisonment.