Measure seeks to prevent companies from removing content on their platforms by Rachel Herzog | March 5, 2021 at 6:44 a.m. 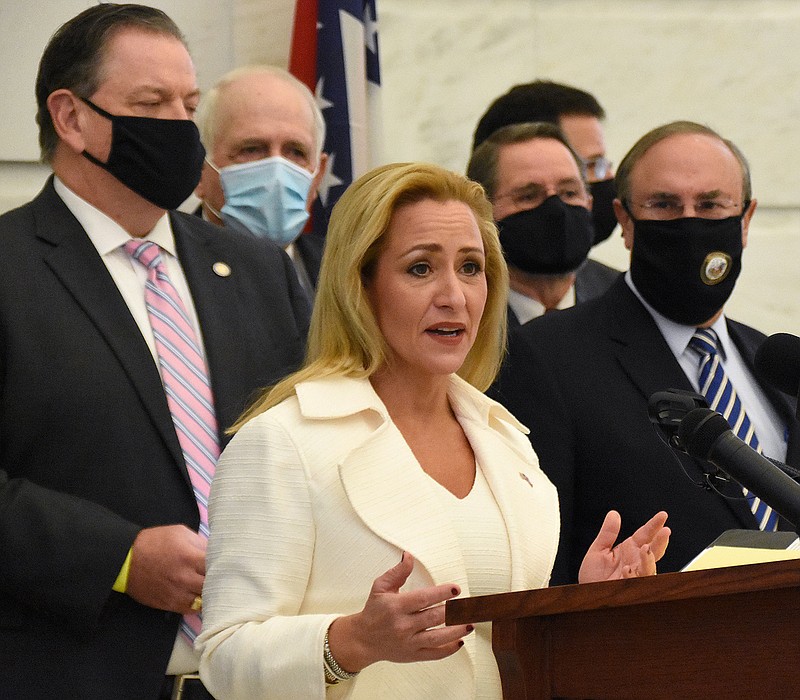 Arkansas Attorney General Leslie Rutledge is pushing for legislation that seeks to limit social media companies' ability to block users and posts from their platforms, a bill some experts said will be quick to draw a legal challenge if passed.

"Facebook and other social platforms are determining what is and what is not dangerous material, and we are seeing too many Arkansas voices being silenced by social media platforms," Rutledge said at a news conference Thursday.

Rutledge said she had heard "countless examples" from constituents who complained that they had been blocked or banned from a social media site.

"Unfortunately, it is the conservative voices that we have heard from the most," she said.

Social media companies are protected from legal liability for what third parties post on their websites at the federal level by Section 230 of the Communications Decency Act.

Part of that provision protects those companies from civil liability when removing or moderating third-party material they deem obscene or offensive, even of constitutionally protected speech, as long as it is done in "good faith."

HB1647 seeks to further define what it means for such a company to fail to act in good faith. Those actions would include when a platform bans, demonetizes, labels, removes or restricts access to content in a way that is inconsistent with its terms of service, or selectively applies those terms of service.

The legislation seeks to impose a fine of up to $10,000 for such violations.

John DiPippa, dean emeritus of the University of Arkansas at Little Rock's William H. Bowen School of Law, said it's not unusual for states to seek to control the activities of corporations within their jurisdiction, whether the company is based in the state or not.

But internet activities are necessarily interstate commerce, which states are constitutionally limited in burdening, DiPippa said.

DiPippa, as well as media lawyer John Tull, said the bill could also face a constitutional challenge in court from companies arguing that the bill infringes on their First Amendment rights.

"I think that's what the First Amendment is meant to protect, is the right of the publisher, be it social media or a newspaper or a television station, to decide what they want to publish on their platform," said Tull, who also said he believed the bill was "clearly unconstitutional," as well as overly broad.

Tull added that he believes the bill could impact Arkansas news media organizations' power to remove content from their online comments sections or social media sites, since the bill targets the actions of an "interactive computer service." Tull is the attorney for the Arkansas Press Association.

The bill comes less than two months after then-President Donald Trump was banned permanently from social media site Twitter after the company said his posts violated its policy against glorifying violence. The tweets followed the U.S. Capitol riot on Jan. 6, and in a blog post the company said there was a risk that his statements would incite further violence.

"When you look at the most powerful country in the world, the president of the United States had his voice censored to the public based on the administrator of a social media site," Hill said.

Rutledge is vying for the Republican nomination for governor in 2022 against Sarah Huckabee Sanders, a former press secretary for Trump.

A spokesperson for Facebook said Thursday that the company was analyzing the bill.

"We are reviewing this legislation to assess its impact on our ability to update and enforce our community standards, particularly when it comes to protecting children and other vulnerable communities by removing content like pornography, hate speech, bullying, self-harm images and sexualized photos of minors," the company said in a written statement.

This year Kentucky, Missouri, Oklahoma and Texas also have introduced legislation that seeks to limit the power of social media platforms in prohibiting certain speech or impose penalties on them for doing so.