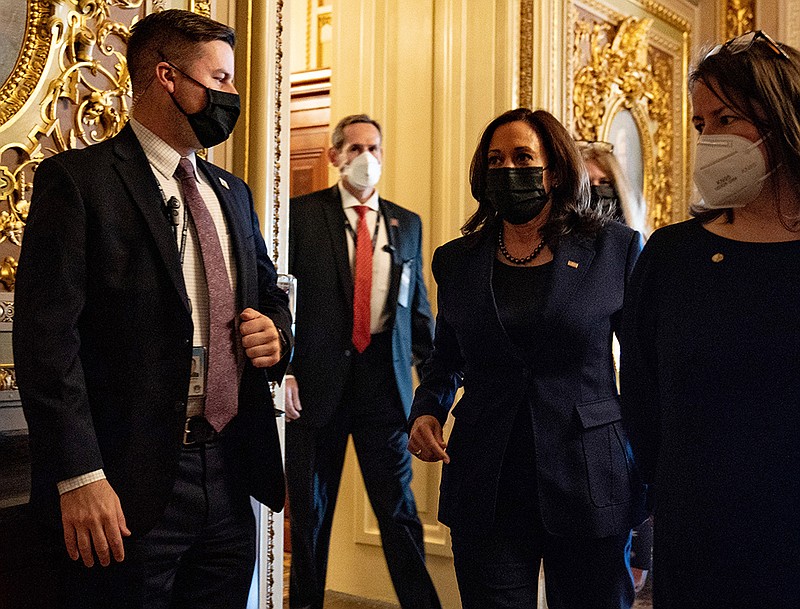 The vote was 51-50, with Vice President Kamala Harris breaking the 50-50 tie. GOP unity against the procedural motion suggested that no Republican will vote in favor of the legislation on final passage, which will take place after hours of debate and an amendment free-for-all that could drag into the weekend.

Once it passes the Senate, the legislation will have to go back to the House for final approval before being sent to Biden's desk for his signature. House Speaker Nancy Pelosi, D-Calif., has guaranteed the House will pass the Senate's version of the bill, despite some changes that liberals dislike, including narrowing eligibility for $1,400 relief checks and excluding a $15 minimum wage.

"My hope is they don't screw around with it too much," Rep. Jim McGovern, D-Mass., said of the Senate in an interview. "If they do, there could be some problems."

Democrats had been holding out hope that Sen. Lisa Murkowski, R-Alaska, would vote with them, but she did not, despite a handful of last-minute changes that could benefit her state. Senate Minority Leader Mitch McConnell, R-Ky., had made clear he wanted Republican senators to stay unified against the legislation.

However, Murkowski told reporters later that she was still examining the final version of the legislation, which was unveiled just moments before Thursday's vote and could change further during the amendment process.

The vote occurred after the last-minute negotiations appeared to succeed in locking down support from wavering moderate Democrats -- even if no Republicans were immediately convinced.

[Video not showing up above? Click here to watch » https://www.youtube.com/watch?v=iIUnh2U5Rfc]In addition to limiting the relief checks, the legislation includes new limits on a $350 billion pot of state and local aid, setting aside $10 billion of it for infrastructure needs that could include broadband, and including a rule barring cities and states from using any new federal money to pay down pension costs or offset new attempts to cut taxes.

It also includes new provisions to ensure that smaller-population states, like Alaska, would receive adequate funding, and directs increased funding to the tourism and outdoor-recreation industries.

As soon as the Senate voted to proceed to the bill, Sen. Ron Johnson, R-Wis., insisted on a full reading of SB628, which commenced immediately and could take hours. Senators normally waive a full reading of legislation, but Johnson has described this as part of his plan to resist the legislation.

He also intends to try to force votes on a number of amendments.

Senate Majority Leader Charles Schumer, D-N.Y., said he welcomed Johnson's move so Americans could hear the contents of a measure that has polled well with the public -- and he vowed the Senate would stay at work until passing the legislation.

"No matter how long it takes, the Senate is going to stay in session to finish the bill this week," Schumer said. "It is time to tell the American people that help is on the way."

Schumer also said, "We are not going to be timid in the face of a great challenge."

Johnson said earlier that he was maneuvering to "shine the light on this abusive and obscene amount of money."

And McConnell said: "Instead of heading into a dark tunnel, we're accelerating out of it."

But Schumer said Johnson would "accomplish little more than a few sore throats for the Senate clerks."

The Senate chamber quickly emptied out as clerks began to take turns reading the lengthy and highly technical bill -- although Johnson remained at his desk.

"Good thing we have time during a national emergency to do this," Sen. Bernie Sanders, I-Vt., said loudly before exiting the chamber.

In addition to stimulus checks and state and local funding, the legislation includes $130 billion for schools and some $160 billion for vaccines, testing and other assistance for the health care system, as well as rental assistance, an enhanced child tax credit, and an increase and extension of emergency federal unemployment benefits that would otherwise expire March 14.

Democrats and the Biden administration have vowed to finalize the legislation ahead of that deadline. Biden's plan would increase the current $300 weekly federal unemployment benefit to $400, and extend it through August.

Republicans railed against the legislation, saying it was replete with excess spending that was unrelated to the coronavirus and unnecessary after Congress already devoted some $4 trillion to fighting the pandemic.

"Calling this a coronavirus bill is like calling Harvey Weinstein a feminist," Sen. John Neely Kennedy, R-La., said on the Senate floor.

Before the Senate can vote on final passage, there will be an open amendment process called a "vote-a-rama" with amendments expected from all sides. Johnson said he was trying to ensure as many amendments as possible were voted on, dragging out the process as long as possible.

Republicans also were working on amendments aimed at getting some Democratic support. Sen. Mitt Romney, R-Utah, said he was crafting an amendment aimed at targeting state and local funding to places that actually experienced revenue losses. Some state budgets have shown greater resilience than expected.

"If states had rising revenues and have already had reimbursement for their covid expenses, I don't see why we should be borrowing money from China to send them more money," Romney said.

Democrats are pushing the legislation through the Senate under a process called budget reconciliation that allows it to pass with a simple majority vote, rather than the 60 normally required. That means no GOP votes are needed, but it also limits what can be included in the bill, excluding provisions that don't have a certain impact on the federal budget.

The $15 minimum wage Biden had included in the bill was ruled out by the Senate parliamentarian on the grounds that it did not comply with the rules of budget reconciliation. That decision infuriated liberals, and Sanders said he would offer an amendment aimed at restoring it. However, exclusion of the provision probably will help ease its passage through the Senate, as two moderate Democrats -- Sens. Joe Manchin III of West Virginia and Kyrsten Sinema of Arizona -- had declared they did not support the $15 minimum wage.

Despite some changes made around the margins, the White House never backed off the overall $1.9 trillion price tag of the bill, or its core components. Republicans accused Biden of reneging on his campaign promise to govern with bipartisanship and unity, but the White House insisted the measure is popular with Republican officeholders across the nation -- if not those on Capitol Hill -- and that the president continues to reach out to Republicans.

"I've been talking to a lot of my Republican friends in the House and the Senate and continue to do that," Biden told reporters Thursday.

Roughly 98% of U.S. households that received a relief check in December also will qualify for the next round of payments being championed by Biden, according to a White House official.

Biden has said that Americans were promised $2,000 in direct checks, but only $600 was approved in December. The president views that promise as a cornerstone of his $1.9 trillion relief package. His proposal offers $1,400 in additional payments that would quickly phase out based on income, so that money is better aimed at the middle class and poor.

Under the current Senate bill, the Biden administration estimates that 158.5 million households will receive direct payments, according to the White House official who insisted on anonymity to discuss private conversations. The official stressed that almost everyone gets a check twice as large as in December, although 3.5 million households that received some payment from the $900 billion December package would no longer qualify.

The decrease is because of tighter limits in the Senate bill on who can receive checks. The administration has wanted to honor the promise made to voters, but it also does not want to be viewed as sending money to the affluent.

Still, families that do not receive a direct check might still come out ahead. The bill expands tax credits for children and child care, and those benefits will go to some of the households that received a check in December but no longer qualify for it.

The Congressional Budget Office estimated Thursday that persistent budget deficits will cause the federal debt to double in size over the next 30 years.

After the 2008 financial crisis and the pandemic, the government has depended heavily on borrowing and low interest rates to help an ailing economy. But as the economy is expected to heal, the budget office has forecast that interest rates will rise and spending on programs such as Social Security and Medicare will increase.

The estimates do not include the new coronavirus relief package, which would further add to the deficit in hopes of speeding faster growth and hiring.

Excluding Biden's aid plan, the annual budget deficit would be equal to 10.3% of this year's gross domestic product, a measure of the total size of the U.S. economy. The annual deficit as a percentage of GDP would decline over the next decade and then rise in the following decades to reach 13.3% in 2051.

All of that translates into the U.S. government carrying a higher debt load. The Congressional Budget Office said publicly held debt would equal 102% of this year's GDP. It estimated that the accumulated debt would grow to 202% of GDP by 2051.

Still, there was positive news because the agency foresees strong economic growth that will lead to higher payroll tax revenue. It estimates that Social Security will exhaust its combined trust funds in calendar year 2032, one year later than it forecast in September.

Information for this article was contributed by Erica Werner, Jeff Stein, Tony Romm and Seung Min Kim of The Washington Post; and by Alan Fram, Josh Boak, Alexandra Jaffe and Lisa Mascaro of The Associated Press. 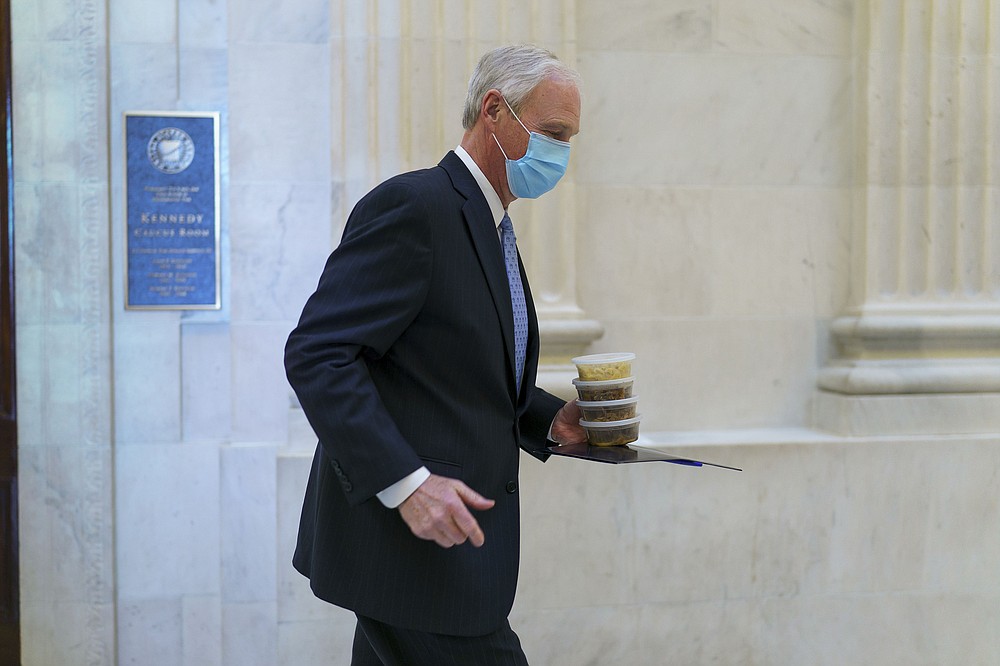 Sen. Ron Johnson, R-Wis., leaves a Senate Republican policy luncheon Thursday. Johnson insisted that the entire text of the $1.9 trillion coronavirus relief bill be read aloud in what he said was a bid to “shine the light on this abusive and obscene amount of money.” Senate Majority Leader Charles Schumer said he welcomed the move so the public could hear the full contents. (AP/J. Scott Applewhite)
ADVERTISEMENT