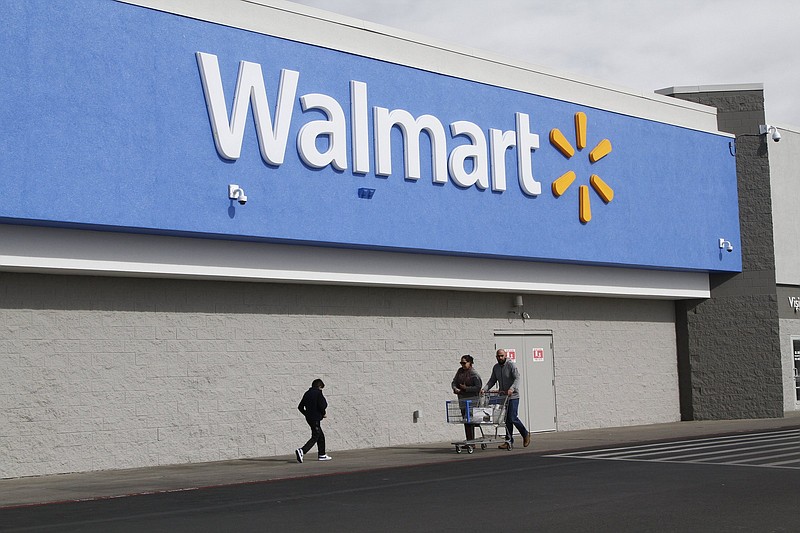 Walmart Inc. says it plans to focus $350 billion over the next 10 years on items in six categories. (AP)

Walmart Inc. said Wednesday that it will spend an additional $350 billion over the next 10 years on items made, grown or assembled in the United States. The company estimates this spending will support more than 750,000 new jobs.

The investment builds on the Bentonville-based retailer's 2013 commitment to spend $250 billion on these products by 2023, said John Furner, president and chief executive of Walmart U.S.

"We're on track to deliver on this commitment, but we think we can do more," Furner said in a company blog post.

The $350 billion will focus on six categories, Furner said. These are plastics; textiles; small electrical appliances; food processing; pharmaceutical and medical supplies; and Goods Not For Resale, defined on Walmart's website as products and services for the company's use. These include store equipment and fixtures, construction materials and facilities maintenance.

Walmart said it based its job creation figures on research by the Boston Consulting Group, which used data from the nonprofit Economic Policy Institute and the U.S. Bureau of Labor Statistics.

The added funds will provide other benefits, Furner said, including avoiding about 110 million tons of carbon dioxide emissions by sourcing closer to customers. This aligns with Walmart's goal to cut its greenhouse-gas emissions 18% by 2025 compared with 2015 levels, according to the company's 2020 Environmental, Social and Governance Report.

The money will also help out small businesses, suppliers and sellers based in the U.S., Furner said. One of the ways it will do this, he said, is by giving 9,000 entrepreneurs a chance to pitch their shelf-ready products to Walmart buyers at the company's annual Open Call events.

This year's Open Call will be on June 30. Just like last year's event, it will be held virtually out of health concerns related to the covid-19 pandemic.

Furner also said Walmart is introducing a concept that it calls American Lighthouses that's intended to identify and break down barriers to U.S. manufacturing.

"These Lighthouses will bring together participants from the supplier community (including manufacturers and non-governmental organizations), as well as others from academia, government and local economic development groups," Furner said.

"By bringing together key regions and various stakeholders, we can make the supply chain more efficient," he said. "The aim is to bring U.S. manufacturing back in a sustainable, long-term way."

According to the Bureau of Labor Statistics, U.S. manufacturing gained nearly a million jobs between 2009 and 2019. But the bureau projects job losses in that sector of about 450,000 between 2019 and 2029.

A Walmart survey in fiscal 2018 found that more than 85% of its customers think it's important for the company to carry products made or assembled in the U.S. The retailer said those results were confirmed in another survey conducted in April 2019.

The retail giant, which employs 1.5 million U.S. workers and last year had $524 billion in sales, is a closely-watched bellwether. It has a network of thousands of suppliers.

The retailer's Made in America efforts have come under fire in recent years, the Washington Post reported Wednesday. Truth in Advertising, a consumer advocacy nonprofit group, has repeatedly taken issue with Walmart's labeling of U.S.-made goods as deceptive and misleading.

In 2015, the group said it had found more than 100 instances of misleading labels on the company's website, on products including teeth-whitening strips and liquid eyeliner, which it reported to the Federal Trade Commission. The agency briefly investigated the matter but closed its inquiry after it concluded that Walmart had taken sufficient steps to prevent consumer deception.

Earlier this year, Truth in Advertising filed another complaint with the FTC, saying that vacuum cleaners, bath towels and other products on the retailer's website continue to be labeled as "Made in the USA when they contain imported components." It called on the agency to "put an end to Walmart's deceptive made in the USA claims once and for all."

In a statement, Walmart said it appreciates the group's efforts and shares its interests.

Information for this article was contributed by Abha Bhattarai of The Washington Post.