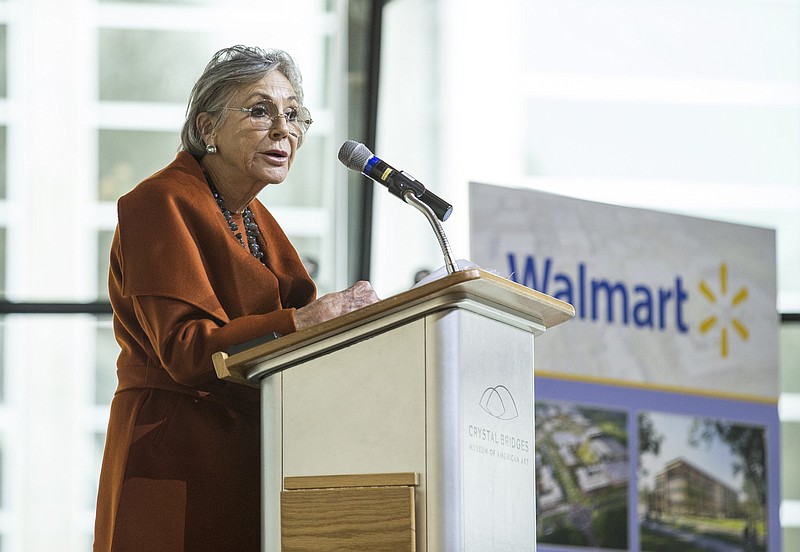 Construction of the Whole Health School of Medicine and Health Sciences is to start next year with plans to open in 2024, according to an announcement Thursday from the Whole Health Institute. Where in the city the school will be built hasn't yet been announced.

Walton announced the creation of the Whole Health Institute and Chopra Library, a nonprofit organization focused on improving health care, at a meeting of the Northwest Arkansas Council in January 2020. During the announcement, she called the health care system "a disease care system."

Dr. Tracy Gaudet, executive director of the institute, said Walton will pay to build the medical school. The cost has not yet been determined.

"The focus of mainstream medical education, which is very, very important, is diagnosing and treating disease once it's pretty far progressed," Gaudet said.

The plan is for the medical school's first class to have 40-50 students, Gaudet said.

"Our hope is many of them will choose to stay in Arkansas for their residencies and beyond so that then becomes a pipeline," she said.

The new school will train future doctors to focus on preventative health and overall well-being as well as disease treatment, she said. Treatment could include nutrition, exercise and stress reduction, for example.

"Ninety percent of heart disease can be prevented in day to day life," she said.

"The Whole Health School of Medicine will help medical students rise to the health challenges of the 21st century through a reimagination of American medical education that incorporates mental, emotional, physical and spiritual health, the elements of whole health, to help people live healthier and happier lives," Walton said in the news release.

Building evidence-based approaches, the curriculum will infuse traditional medicine with integrative techniques and will include biomedical sciences, clinical training, medical entrepreneurship and research, according to the news release.

The program is allopathic, meaning graduates will receive a doctor of medicine degree.

Health sciences degrees and certificates will also be offered, which may include functional nutrition, mental health, social work and health coaching; faculty development in whole health approaches; and national certification of existing educational programs that align with the principles and practices of whole health.

How many faculty will need to be hired for the school is yet to be determined. However, the organization announced three people who will lead the school.

Dr. Elly Xenakis will be the dean. Xenakis has worked at the University of Texas Health Science Center at San Antonio as vice chairwoman for education, division chief of the maternal-fetal medicine division and residency program director in the department of obstetrics and gynecology.

Dr. Adam Rindfleisch will serve as vice dean for education. Rindfleisch has worked at University of Wisconsin-Madison School of Medicine and Public Health as an associate professor in the department of family medicine and as the medical director in integrative health.

After graduating medical school, doctors participate in three-year residency programs under the supervision of other physicians before practicing on their own.

The Northwest Arkansas Council, a nonprofit organization with members from the region's largest business, education and health care organizations, published a report in 2019 that estimated the area is missing out on about $1 billion a year in health care, largely because people are traveling elsewhere for specialty health care.

The report provided several recommendations to make the region a "health care destination," including establishing a four-year medical school.

The council's 2019 report also concluded more residency slots will keep more doctors in the region because residents are likely to stay and practice where they did their residency. The Whole Health medical school is discussing collaboration with all the major health care providers in Northwest Arkansas, according to Thursday's news release.

The school is seeking accreditation from the Liaison Committee on Medical Education, which is recognized by the U.S. Department of Education as an authority that may accredit medical education programs, according to its website.

The only other allopathic medical school in the state is the University of Arkansas for Medical Sciences in Little Rock, which has a campus for third- and fourth-year students in Fayetteville.

The Bentonville Planning Commission on Tuesday approved a rezoning at the Crystal Bridges Museum of American Art to allow for construction of a building for the Whole Health Institute, which will be a 75,000-square-foot, multiuse office and community space. The institute will break ground this year with an estimated completion date of 2023.

This story was originally published at 9:00 a.m.