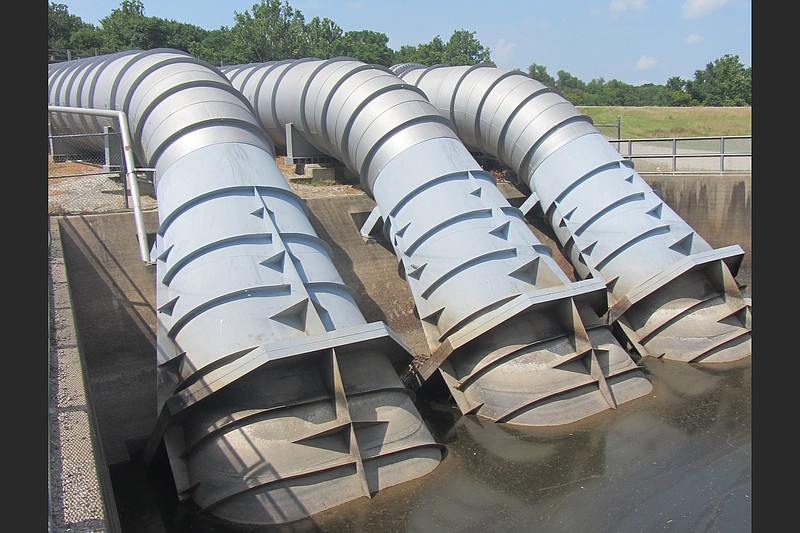 Marked Tree Siphons, built in 1939, are the only design of their type in the United States. (Special to the Democrat-Gazette/Marcia Schnedler)

MARKED TREE — It sounds like a feat of magic to lift the flow of a river over a levee and bring it back down on the other side. But it was achieved as an engineering work that qualifies as unique in the true sense of that often misused word.

The three massive tubes of Marked Tree Siphons can be seen about seven miles north of Marked Tree. This Arkansas Delta project was built in 1939 by the U.S. Army Corps of Engineers on Sunken Lands terrain that had shifted and fallen during the massive New Madrid earthquakes of 1811-1812.

The Encyclopedia of Arkansas History & Culture describes the siphons as “an integral part of the St. Francis Basin Flood Control Project. They were also a unique application of an engineering structure of their type, designed to lift the flow of the St. Francis River over an earthen levee and deposit it in the river channel on the other side of the levee.”

There is evidently no similar structure elsewhere in the United States — and quite possibly anywhere else in the world. How the project was built, after previous engineering attempts had failed, makes for a fascinating chapter in the longstanding efforts to control flooding in the Delta.

Back in 1926, a floodway plus lock and sluiceway were completed as part of plans to tame the St. Francis by diverting overflow during high-water periods. But 40 feet of the sluiceway broke in 1933, leading to the levee’s partial collapse. After Corps of Engineers repairs, the sluiceway was damaged again in 1938, this time beyond repair. The collapses happened because the fine-grained soil below would turn to quicksand when saturated. 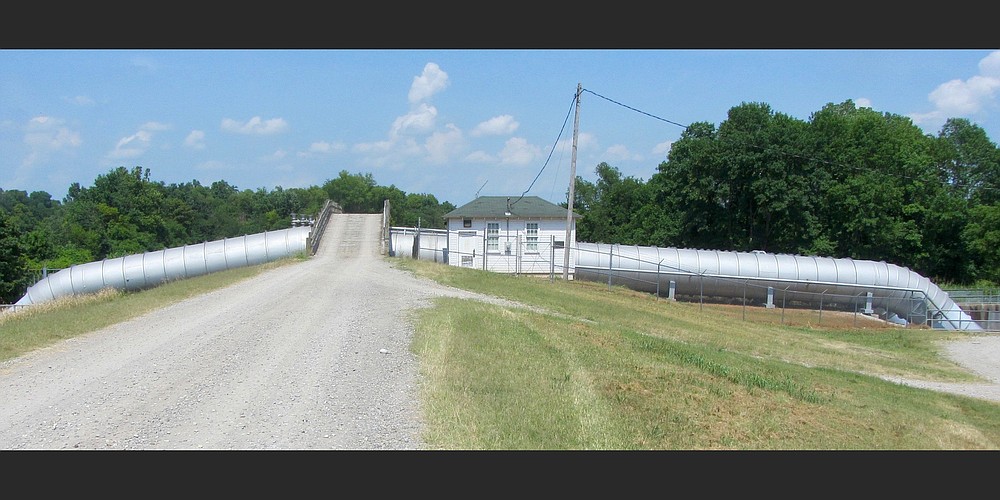 A bridge takes a road over the three tubes of Marked Tree Siphons in Poinsett County. (Special to the Democrat-Gazette/Marcia Schnedler)

That led to the unparalleled design of the siphons. At the dedication ceremony June 8, 1939, the project was christened with a bottle of champagne. A correspondent for the Marked Tree Tribune reported that “a whole river was lifted 30 feet across a dam and deposited on the other side.”

At a cost of $215,000, the three steel tubes integral to the design were among the largest in the world, with diameters of 9 feet and lengths of 228 feet. As the Arkansas encyclopedia reports, “Their operation was deceptively simple. First, a vacuum pump primed each siphon. Once the siphon was primed, the vacuum pump was turned off, and the flow was self-sustaining. An air valve regulated the rate of flow.”

Once activated, the siphons can run indefinitely, powered only by gravity. Eight decades later, the pumping process still functions properly after an overhaul in the 1990s. The encyclopedia notes that the siphons “have maintained the St. Francis River in its natural channel, as well as protecting agricultural resources and permitting expanded settlement in the area. Tests of the completed siphons revealed an operating efficiency of 97.1 percent.”

Visitors to the National Register of Historic Places site can look over the siphons from a small bridge built over the tubes after the gates of the adjoining lock were removed. There is likely to be nobody else present, leaving the imagination free to divine that these mysterious devices might have landed from some science-fiction movie.

To reach Marked Tree Siphons, take U.S. 63 for about 2 miles west from the town of Marked Tree. Then turn right on unpaved and dusty Lock and Dam Road, continuing 5 miles to the National Register site.

CORRECTION: Harrisburg is the county seat of Poinsett County. The county seat was misidentified in an earlier version of this article.