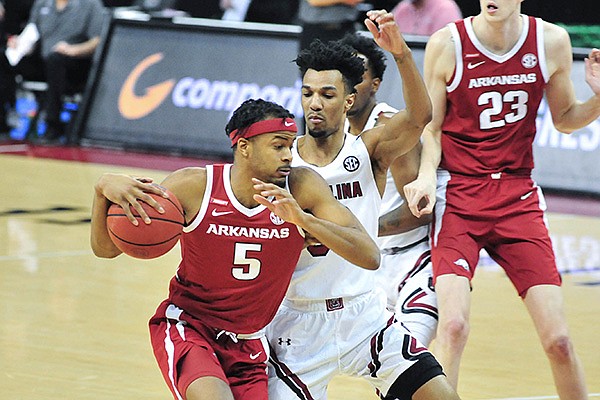 Arkansas guard Moses Moody (5) drives with the ball during a game against South Carolina on Tuesday, March 2, 2021, in Columbia, S.C. (Photo by Ryan Bethea via SEC Pool)

Moses Moody tied his career high with 28 points and No. 12 Arkansas won its 10th straight in the Southeastern Conference with a 101-73 victory over South Carolina on Tuesday night.

The Razorbacks (20-5, 12-4 SEC) did it with the long ball, hitting 15 3-pointers to continue its longest league win streak to match the 1994 national champions who won their last 10 SEC regular-season games that year.

The Razorbacks got going from way outside in the first half to open a double-digit lead that South Carolina (6-13, 4-11) could not overcome.

Arkansas, a middle of the SEC pack team in three-point shooting percentage, couldn't miss in a first half that looked more like practice than an SEC game.

Leading scorer Moody hit three 3-pointers while Sills made his first four before he bounced a long one off the rim.

Arkansas made 20 3-pointers in its opening win over Mississippi Valley in November. It's previous high in SEC play this season was 12 in a 99-69 drubbing of Georgia in January. And they used the long ball to pull away early.

Sills' first 3-poiner put Arkansas up for good at 17-14. Moody made it 26-18 with his second three of the half. Even 7-foot-3 Connor Vanover got into the act, nailing an open shot from the right corner. By the time Sills made back-to-back threes, the Razorbacks were up 32-22 and wouldn't be caught.

It didn't help that South Carolina's top two scorers in AJ Lawson and Keyshawn Bryant were a combined 4-of-20 shooting for 10 points the first 20 minutes.

Lawson led the Gamecocks with 18 points.

Arkansas: The Razorbacks look poised to be a dangerous team this March. They've got outside shooting, a dynamic scorer in Moody and a strong inside game led by the quick senior in Smith. And Arkansas' already has a victory over SEC regular-season champion Alabama to fall back on should the teams meet at the SEC Tournament next week.

South Carolina: The Gamecocks broke a six-game losing streak last Saturday at Georgia, but couldn't find any momentum against the deep, talented Razorbacks. When Arkansas began hitting threes, South Carolina tried to match them. That's not their game.

Arkansas ends the regular season at home against Texas A&M on Saturday.

South Carolina finishes the regular season at Kentucky on Saturday.

FINAL — Arkansas wins 101-73, putting on a clinic on the road. Moses Moody scored a game-high 28 points and grabbed 7 rebounds, Justin Smith added 22 and 8, and Desi Sills scored in double figures for the first time since Jan. 20 with 15. JD Notae added 21.

The Razorbacks have won 10 straight in the SEC and are 20-5 overall. They are scheduled to close the regular season at home against Texas A&M on Saturday.

1:01, 2H — Abayomi Iyiola checks in for the first time as a Razorback. He tore his knee up in the offseason. Iyiola had been dressing out of late but hadn’t seen the floor. His effort on the offensive glass leads to JD Notae pushing Arkansas over the 100-point mark. Razorbacks lead 101-73.

3:25, 2H — Arkansas leads 92-63 at the final media timeout of the night. Seven players have scored at least three points tonight, and four have 15-plus. Jalen Tate hasn’t scored. Devo Davis has one bucket. Moses Moody has 26, Justin Smith 22, JD Notae 19 and Desi Sills 15.

6:16, 2H — Desi Sills missed a three-pointer from the left wing, Justin Smith rebounded it and missed a short runner, but Davonte Davis tip-dunked it for his first score of the game. Razorbacks up 28.

8:46, 2H — JD Notae with a one-hand dunk off a South Carolina turnover. Razorbacks really pouring it on after a Desi Sills three-ball. Sills has 15 points, and Arkansas leads 73-50. Notae up to 13 points, 5 assists and 4 rebounds. Complete game from the Razorbacks tonight. Continuing to take care of business. Bud Walton Arena should be fun this weekend – if Texas A&M shows up.

10:19, 2H — Justin Smith was fouled on the interior battling for a defensive rebound. He hit both free throws on the other end. Arkansas’ lead is 68-48. Smith has 18 points and 7 rebounds.

11:49, 2H — Justin Smith hit a rare midrange jumper to put the Razorbacks up 17. Then Desi Sills fouled a Gamecocks player on a layup at the rim. Justin Minaya will be at the line when play resumes. Razorbacks lead 63-48 but their defense slipped between timeouts there. South Carolina has hit 6 of its last 9 shots.

12:33, 2H — Moses Moody ends Arkansas’ rough stretch offensively with a three-pointer. But South Carolina answers with a bucket. Razorbacks’ lead is 61-46. Moody is up to 24 points on 13 shots.

13:40, 2H — South Carolina has cut its deficit to 14 after a driving layup. Razorbacks’ shot selection, particularly from JD Notae, has been questionable of late. Justin Smith then dribbled a ball off his knee. Not been a great stretch out of the first media timeout.

Smith and Moody have all nine of Arkansas’ points this half. Gamecocks will be at the line when play resumes.

16:46, 2H — Justin Smith grabbed a loose ball following a Jalen Tate miss inside and scored at the rim. Officials called the Gamecocks for goaltending. Smith then scored on another play off the bounce. He now has 14 points and 5 rebounds tonight. Arkansas leads by 20.

17:41, 2H — Moses Moody was fouled attempting a free throw line jumper against a bit of zone defense from the Gamecocks. He hit both free throws. Razorbacks’ edge is 53-36. Moody with 21.

HALF — Arkansas played one of its best offensive halves of the season, putting up 49 points to carry a 17-point lead into the break. Moses Moody has 17 points and 6 rebounds, Desi Sills has 12 on 4 of 5 from deep, Justin Smith added 9 points and JD Notae 8.

The Razorbacks hit 10 of 20 attempts from deep. Smith’s flurry at the end of the half was big. He’s playing his best basketball probably of his college career right now. He’s steady and solid. Moody hit 7 of 11 shots. He made 6 shots from the floor last week against Alabama and LSU.

Connor Vanover added 3 points, 4 rebounds and 4 blocks in 15 minutes. Arkansas was plus-17 with him on the floor.

South Carolina finished the half 12 of 43 from the floor and scoring .800 points per possession. AJ Lawson leads the way with eight points. Gamecocks are 3 of 13 from distance.

1:05, 1H — Justin Smith runs the floor and finishes with a dunk. Razorbacks’ lead jumped to 45-30 before a Gamecocks bucket seconds later. Smith, though, scored with a floater off the glass on the ensuing possession. He has nine points.

2:25, 1H — JD Notae just hit the Razorbacks’ 10th three of the first half. He banged that one home from the left wing on a nice extra pass from Connor Vanover. Arkansas leads 41-29.

3:54, 1H — Razorbacks carry a 38-25 lead into the final media timeout of the half. Moses Moody and Desi Sills have combined for 29 points. Justin Smith, JD Notae and Connor Vanover each have three points. Razorbacks are 9 of 16 from three. South Carolina is 9 of 34 shooting.

7:49, 1H — Razorbacks lead 26-20. South Carolina cannot buy a bucket. The Gamecocks have yet to hit back-to-back shots in this game. They are 7 of 24 from the floor. Arkansas is 10 of 20, including 6 of 12 from three. Moses Moody has 14 points and Desi Sills has six to lead the Razorbacks. JD Notae has handed out three assists and Justin Smith two. Jalyn McCreary has a team-high six points for South Carolina.

10:39, 1H — Justin Smith drove the right side of the lane and found Connor Vanover for three in the right corner. Razorbacks up 20-16. Arkansas has hit 4 of 9 from deep so far. Moses Moody's called three-pointer earlier has been changed to a two. South Carolina is 5 of 18 from the floor.

12:04, 1H — After Moses Moody hit another three-ball (his foot was actually on the three-point line), Desi Sills got in on the fun, hitting one from the left wing. Arkansas leads 18-14.

13:15, 1H — Moses Moody hits a three-pointer on the left win in transition assisted by JD Notae. Arkansas, though, allowed Tre Hannibal to offensive rebound and put back a missed three from the top of the key. He was fouled, too, and hit the free throw. SC up 13-12.

14:00, 1H — Moses Moody hit a midrange jumper after a scramble situation to give Arkansas a one-point lead, but he gave up a shot in the lane on the other end. Gamecocks back up 10-9.

14:31, 1H — Jermaine Couisnard has hit three of four free throws to give the Gamecocks an 8-7 lead. Jalen Tate and Moses Moody were tagged with the fouls.

15:14, 1H — JD Notae adds a three-pointer from the left corner off a Moses Moody find. Moody then grabs a tough rebound on the other end. Guard rebounding is going to be big tonight. Moody has accounted for all of Arkansas' points as it leads 7-5 at the first media timeout.

16:40, 1H — Moses Moody answered a midrange jumper from Keyshawn Bryant with one of his own just inside the foul line. Moody has all four points for the Razorbacks to this point.

17:18, 1H — Three blocks for Connor Vanover in the first three minutes. Great defensive start for him. His long block streak continues. He now has at least one in 10 straight games.

18:35, 1H — South Carolina buries a three-pointer off an Arkansas turnover. Gamecocks turn teams over at a really high rate. The Razorbacks have to be tougher with the ball. South Carolina leads 3-2.

19:18, 1H — Connor Vanover blocked a shot on the Gamecocks’ first possession then Moses Moody added a score off the bounce on Arkansas’.

This group has started each game since the beginning of February. It has allowed 0.88 points per possession over 103 defensive possessions together, and scored at a 1.03 PPP clip.

Moody was named SEC freshman of the week on Monday for his play vs. Alabama and LSU. He made 27 of 33 free throws in the two games, but he was 6 of 26 from the floor. Moody made 6 of 24 shots in the lane last month and 3 of 18 two-point shots outside the lane.

Smith is averaging 16 points and 8.5 rebounds over the last four games and is playing his best basketball. He led Arkansas in scores at the rim last month with 28. He was 32 of 45 on attempts in the lane. Davis was second on the team in that span with 19 lane scores – 16 at the rim.

Vanover finished February 5 of 10 from three-point range on the left and right wings. He was 2 of 10 in January.

The Gamecocks (6-12, 4-10 SEC) play at the sixth-fastest tempo in the country, averaging a shade under 75 possessions per game. This one could be very up and down pace-wise, and I think Arkansas is OK with that.

Lawson, who averaged 17.4 points per game, leads South Carolina in three-pointers made in SEC games with 45 on 122 attempts. Jermaine Couisnard is second with 18 on 63 tries and adds 10.2 points per outing. Minaya grabs a team-high 6.8 rebounds per night.

In conference games, has turned opponents over on 22.6% of their possessions, which ranks first in the league. However, South Carolina puts teams on the free throw line a lot. Opposing teams have shot more than four free throws for every 10 field goals attempted.

Offensively, the Gamecocks are 12th in the SEC in offensive efficiency and ninth on the defensive end. They also rank 10th or worse in two-point and three-point percentage on both ends.