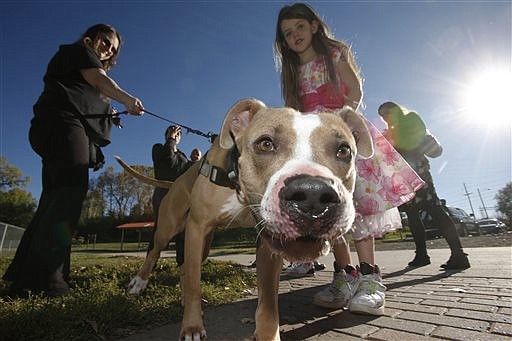 A pit bull named Buddy stands with caretaker Michelle Mayer (left) and 9-year-old Charlie Burton at a dog park in the south Denver suburb of Englewood, Colo., in this Tuesday, Oct. 14, 2014, file photo. Buddy was being cared for in Englewood because of a ban on pit bulls in Aurora, Colo., where the dog lived with his owners.

The City Council approved the amendment to the ordinance Feb. 22 after it was presented to council members just a couple of hours before they met. The amended ordinance still calls for the removal of a pit bull ban that has been in place for decades, but alters language contained in the initial proposal.

The amendment was presented by Council Member R.J. Mazzoni, who said he wanted the ordinance to focus on the breed ban as well as safety issues that could be implemented.

Mazzoni said he understands that the pit bull ban has been, and will continue to be, the main focus of the debate, but he wants to address changes he made to the original ordinance, which was presented Feb. 1 by Council Member Chad Gardner.

"My biggest fear with this proposed ordinance was changing the criteria for determining a dangerous dog," Mazzoni said. "Any aggressive approach now 'must include aggressive physical contact.' I feel the intent of this ordinance should be to stop dogs before there is an attack, so I changed the wording to reflect that."

"I was also concerned that there were no conditions for an owner installing an electric fence," he said. "While there are many dogs that will completely respect the electric fence boundaries, many others do not. Electric fences also do not keep other animals out."

The bulk of the changes had to do with the label of "dangerous" or "vicious" dogs and the requirements placed on owners if their pet is placed into that category.

"I'm not content that once a dog got labelled as 'dangerous' that it would be hazardous for the rest of its life," Mazzoni said. "A rescue dog could act out of fear of other humans and be labelled 'dangerous' but as it warms to its new family, that fear subsides."

In such situations, the dog's owner could petition Animal Services to remove the dangerous declaration after three years as long as there were no violations or complaints against the dog and the dog had completed a training program from a certified trainer.

Gardner wasn't present at the Feb. 22 meeting and said he had not discussed changes made to the previous draft with Mazzoni prior to that meeting. He said he has since read the amended draft.

"I had not discussed the changes with Mazzoni outside of our previous council meeting," Gardner said in an email interview Friday.

"Mr. Mazzoni mentioned at the first meeting in February he wanted to see it strengthened further," Gardner said. "His amendment does that and adds additional language that will allow Animal Services to do their jobs more proactively when dealing with homeowners and their pets."

Gardner said it's common for city officials to review city codes used by other cities when considering ideas for their own community.

"I'm glad he took the time to explore this issue further and try to take some best practices from other cities in central Arkansas," he said.

This is the second time in two years Maumelle's City Council has discussed repealing the animal ban ordinance, which has been in place for decades. Some residents expressed support for keeping the ban in place, while others suggested the city put the issue before voters.

Mosley motioned to table the ordinance indefinitely before the amendment went before the council, but the motion failed by a 5-to-3 vote.

"Early in the discussion, I had shared the resident feedback I have received on the ordinance and gave my opinion that Maumelle residents were against lifting the ban by 70% to 30%," Mosley said in an email. "As such, I made a motion to table the ordinance until proponents of lifting the ban could successfully obtain resident approval to do so through an acceptable referendum."

Gardner wasn't surprised by the motion.

"I figured that attempt would have been made even if I had been able to attend the council meeting this week," Gardner said in an email. "If I had been there, it likely would have still failed 3-5."

Mosley said the dangerous animal issue is a big deal in a city whose residents have always insisted on "safety first" in various forums over the years.

"Such forums included a study done back in 2012 called Maumelle Forward where I remember residents saying that 'safety' was their top reason for living in Maumelle," Mosley said. "As such, I am firmly convinced that the overwhelming majority of residents don't want a layer of safety stripped away and want to keep the current ban on dangerous dogs in place."

Gardner said he doesn't expect the amended ordinance to be a long-term discussion among council members.

"Maumelle is unique in that we only have one reading per council meeting of our ordinances," he said. "Many other cities waive this rule and have all three readings in the same night so they can immediately vote on it. We take our time in Maumelle so that residents can have the opportunity to learn of the council's agenda and provide feedback."