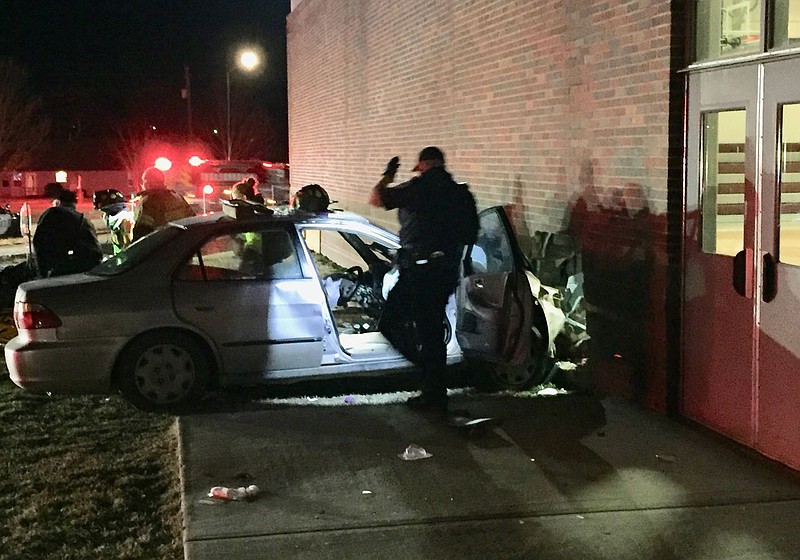 Photo by Graham Thomas Emergency personnel work at the scene of a motor vehicle accident at Siloam Springs Intermediate School. The vehicle crashed into the building near the site of a previous accident in which a motorist crashed into the school building.

It marks the second time in less than two months the east wall of the school gym has been hit by a vehicle.

A 1999 Honda Accord was traveling at a high rate of speed west bound on Cherri Whitlock Avenue when it left the roadway, crossed the lawn and struck the side of the building, according to Captain Derek Spicer, of the Siloam Springs Police Department.

Three adults were inside the vehicle when it crashed, according to Fire Chief Jeremey Criner. Fire department personnel pull the driver from the car, said Battalion Chief Adam Rusk. Two patients were transported by ambulance and one was transported by air ambulance, Criner said.

Two fire companies, three ambulances and an air ambulance responded to the scene, according to Chief Criner.

Spicer said on Monday he could not release the identities of the people in the vehicle because it was unclear whether their families had been notified.

A pickup truck hit the school during the early hours Jan. 5. It was also traveling westbound on Cheri Whitlock when it lost control, jumped the curb on the south side of the road, then came back across the north side of the road and went through the ditch before hitting the wall of the building.

The driver left the vehicle and police believe the suspect was picked up by another vehicle, Spicer said at the time.

On Sunday, the car appeared to hit the building about 40 feet north of where the first vehicle hit the gym in January, according to Superintendent Jody Wiggins. This time the car didn’t hit a ditch or fire hydrant to slow them down and appeared to do a lot more damage, he said.

An architect and structural engineer were scheduled to visit the site on Monday afternoon to determine if the building is structurally sound, Wiggins said.

Students are being kept out of that part of the building until it has been inspected, Wiggins said.

Contractors had just finished putting a coat of paint on the inside wall repairs from the previous accident on Saturday, Wiggins said. There was still some work to be completed on the outside, but the inside work was finished. The school had planned to take down the temporary walls that block students from the work area on Monday, he said.

Wiggins guessed that the school had been in place for the past 20 years and the road has been there for a number of years as well, he said.

“We’ve never had an issue before the past two months,” he said.

The district plans to put some kind of a barrier between the school and road to protect the school from being hit again, but Wiggins said he doesn’t know what that will look like yet. 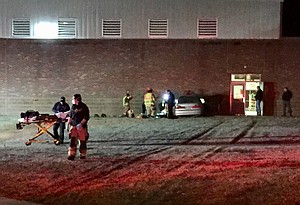 Photo by Graham Thomas Emergency personnel work at the scene of a motor vehicle accident at Siloam Springs Intermediate School. The vehicle crashed into the building near the site of a previous accident in which a motorist crashed into the school building. 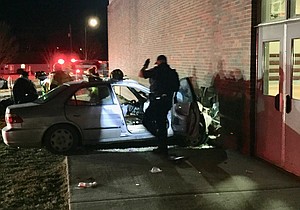 Photo by Graham Thomas Emergency personnel work at the scene of a motor vehicle accident at Siloam Springs Intermediate School. The vehicle crashed into the building near the site of a previous accident in which a motorist crashed into the school building.
ADVERTISEMENT