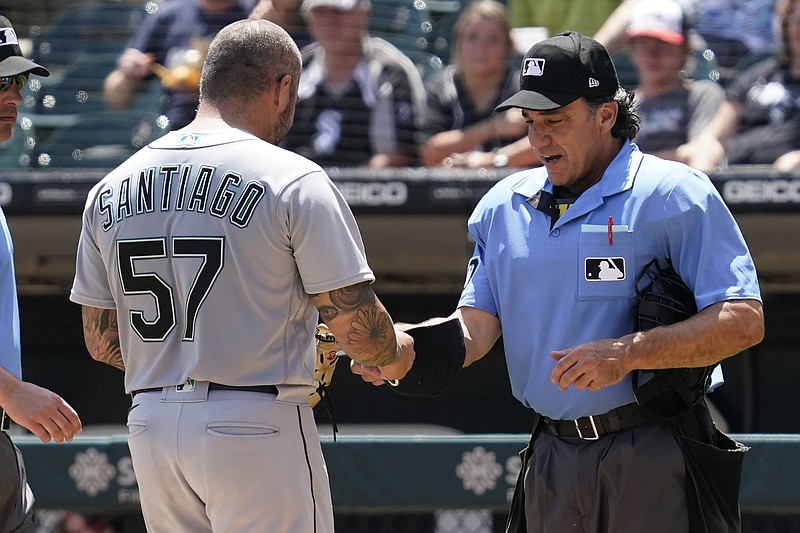 Seattle Mariners pitcher Hector Santiago became the first player disciplined under Major League Baseball's crackdown on grip-enhancing foreign substances, given a 10-game suspension Tuesday. Michael Hill, the former Miami Marlins general manager who is senior vice president for on-field operations, announced the penalty two days after Santiago was ejected from a game at the Chicago White Sox. Santiago also was fined an undisclosed amount. He appealed the decision to MLB special adviser John McHale Jr., and the suspension will be delayed until the appeal is decided. Seattle Manager Scott Servais insisted before Tuesday's game against Toronto that there was no foreign substance on Santiago's glove and that it was rosin.

The family of former Los Angeles Angels pitcher Tyler Skaggs filed lawsuits Tuesday in Texas and California charging the team and two former employees with negligence in his drug-related death two years ago. The lawsuits -- filed by Skaggs' parents in Texas and his wife in California -- name the Angels organization as well as former Los Angeles communications directors Tim Mead and Eric Kay as defendants. Skaggs, 27, was found dead in his suburban Dallas hotel room on July 1, 2019, before the start of what was supposed to be a four-game series against the Texas Rangers. Kay was indicted by a federal grand jury in October on drug charges for allegedly providing Skaggs with the drugs that caused his overdose death. Kay was charged with drug distribution and drug conspiracy in Skaggs' overdose death, according to the indictment in Fort Worth. The charges carry a maximum of a life sentence and 20 years in prison, respectively. His trial is set to begin Aug. 16.

San Francisco Giants pitcher Gregory Santos was suspended for 80 games without pay under Major League Baseball's drug program on Tuesday after a positive test for Stanozolol. The 21-year-old right-hander made his big-league debut April 22 and was 0-2 with a 22.50 ERA in 2 innings over 3 games when he was optioned to the minors six days later. Santos will lose about half his salary, which is $46,600 while in the minor leagues and the $570,500 minimum while in the major leagues. He became the third player suspended this year under the major-league program, after Miami pitcher Paul Campbell and Colorado third baseman Colton Werker.

The Chicago White Sox placed Jake Lamb on the 10-day injured list on Tuesday and reinstated fellow outfielder Billy Hamilton from the IL. The White Sox also recalled first baseman Gavin Sheets from Class AAA Charlotte and optioned outfielder Luis Gonzalez to their top farm club. The 30-year-old Lamb has a strained right quadriceps. He is batting .224 with 5 homers and 10 RBI in 31 games in his first season with Chicago. Hamilton was placed on the IL on June 6 with a strained right oblique. He is hitting .217 with 2 homers, 10 RBI and 5 steals in 36 games for the AL Central leaders. The 25-year-old Sheets, a second-round pick in the 2017 amateur draft, is looking for his big-league debut. He was with the White Sox for a couple of days earlier this month but did not get into a game. Sheets batted .292 with 7 homers and 33 RBI in 41 games with Charlotte. He also can play the corner outfield spots. Sheets' father, Larry, played for Baltimore, Detroit and Seattle during eight years in the majors.

The Toronto Blue Jays acquired injured outfielder Corey Dickerson and reliever Adam Cimber in a trade Tuesday with the Miami Marlins. Miami obtained infielder Joe Panik and minor-league reliever Andrew McInvale. Dickerson is sidelined with a bruised left foot and is expected to be in a walking boot for at least two more weeks. He is batting .260 with 2 homers and 14 RBI. The sidewinding Cimber has a 2.88 ERA in 33 games. Panik is batting .246 with 2 homers and 11 RBI. McInvale has a 2.55 ERA in 15 games in the minor leagues.

Edmonton Oilers captain Connor McDavid ran away in the voting to win his second Hart Trophy as NHL MVP on Tuesday, much like he blew away the competition while leading the league in points. McDavid became just the second unanimous Hart selection -- joining Wayne Gretzky in 1982 -- in receiving all 100 first-place votes from members of the Professional Hockey Writers' Association. Toronto's Auston Matthews finished second in the voting followed by Colorado's Nathan MacKinnon. Vegas' Marc-Andre Fleury beat out Tampa Bay's Andrei Vasilevskiy and Colorado's Philipp Grubauer to win his first Vezina Trophy as the NHL's goalie of the year. New York Rangers' Adam Fox won the Jack Norris Trophy as the NHL's top defenseman, beating out Tampa Bay's Victor Hedman and Colorado's Cale Makar.

England triumphed over Germany at Wembley Stadium on Tuesday, winning 2-0 to reach the European Championship quarterfinals. Just like in England's two group wins, Raheem Sterling was on the scoresheet, breaking the tense deadlock in the 75th minute in a move he started and completed. The round of 16 finally saw England net more than once at Euro 2020, and for Harry Kane to shed the pressure on his shoulders by finally scoring. The striker headed in Jack Grealish's cross in the 86th minute to give England only its second-ever win in the knockout stage of the European Championship.

Ukraine reached the round of 16 at the European Championship with the worst record of the advancing teams and now the quarterfinals, too. Ukraine eliminated previously unbeaten Sweden 2-1 on Tuesday with a goal in stoppage time at the end of extra time. Substitute Artem Dovbyk stooped low to guide a header from Oleksandr Zinchenko's cross past goalkeeper Robin Olsen. Ukraine Coach Andriy Shevchenko ran down the sideline to celebrate a goal that sends his team to Rome to face England on Saturday. Zinchenko had given Ukraine the lead in the 27th minute when he rifled in a low shot set up by a crafty pass from captain Andriy Yarmolenko. Emil Forsberg's deflected shot in the 43rd minute equalized for Sweden. It was his fourth goal of the tournament.

The NCAA placed the TCU men's basketball program on three years' probation Tuesday and punished a former assistant coach it accused of accepting $6,000 from a business management company and then lying to the school about it. The school avoided scholarship reductions and limits on recruiting imposed on other programs in a federal corruption case that has ensnared several big-name schools. TCU was fined $5,000 and 1% of its men's basketball budget. TCU placed assistant Corey Barker on administrative leave in March 2019 after he was accused in court documents of accepting the money in a Las Vegas hotel room two years earlier. The NCAA said Barker denied any knowledge or involvement in arrests in the federal case during an investigation by TCU. Barker twice declined to be interviewed by TCU officials not long before he was placed on leave, the NCAA said. Barker, who also denied involvement during the NCAA's investigation after agreeing to be interviewed, was given a five-year show-cause penalty, meaning a school that hires him during that period must prove to the NCAA he can perform athletic-related duties. 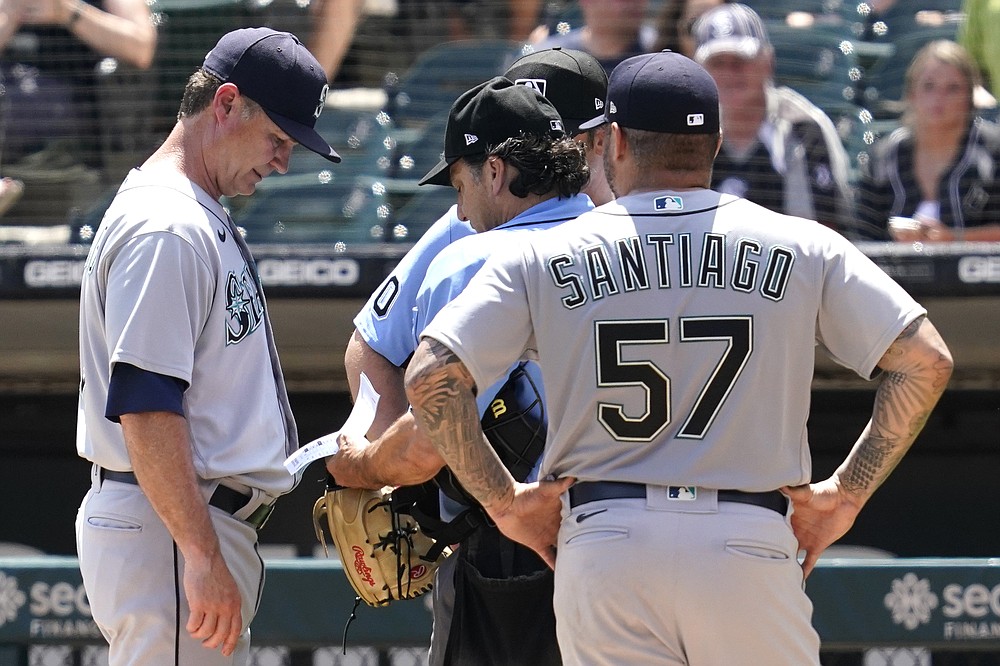 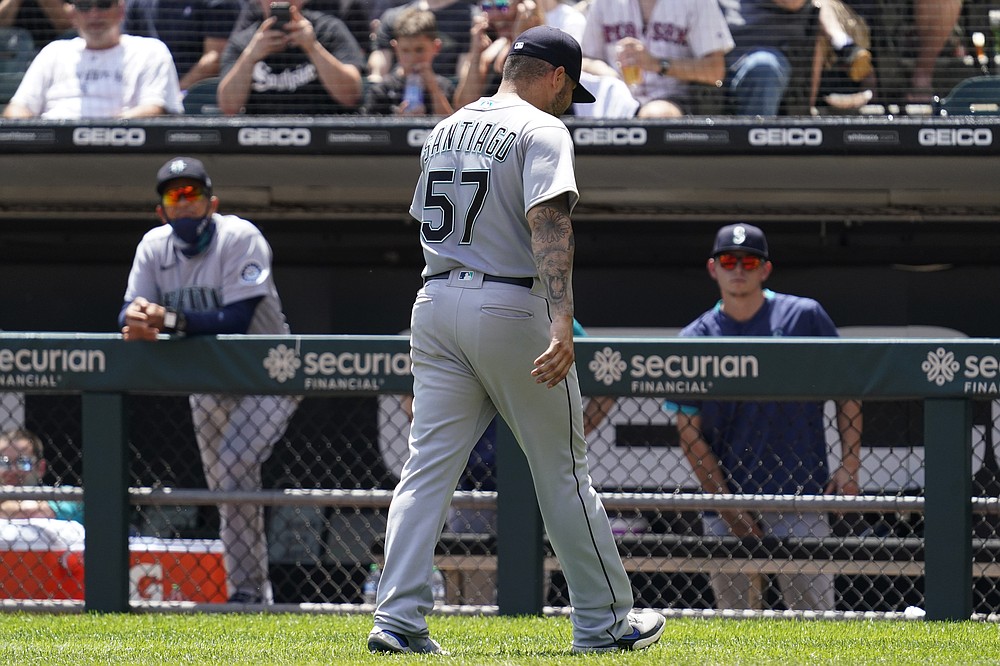 Seattle Mariners relief pitcher Hector Santiago walks to the dugout after he was ejected by home plate umpire Phil Cuzzi during the fifth inning in the first baseball game of a doubleheader against the Chicago White Sox in Chicago, Sunday, June 27, 2021. (AP Photo/Nam Y. Huh) 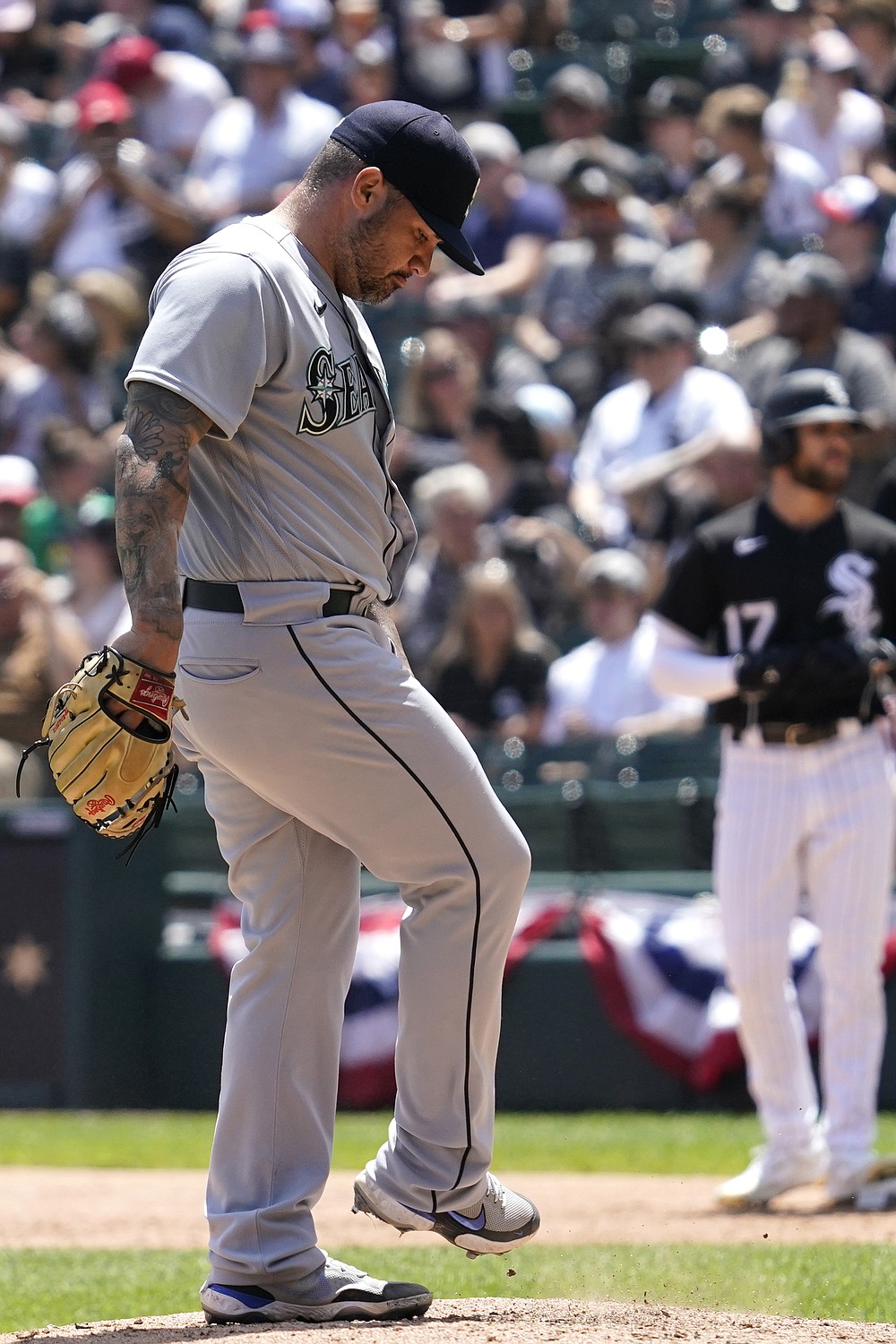 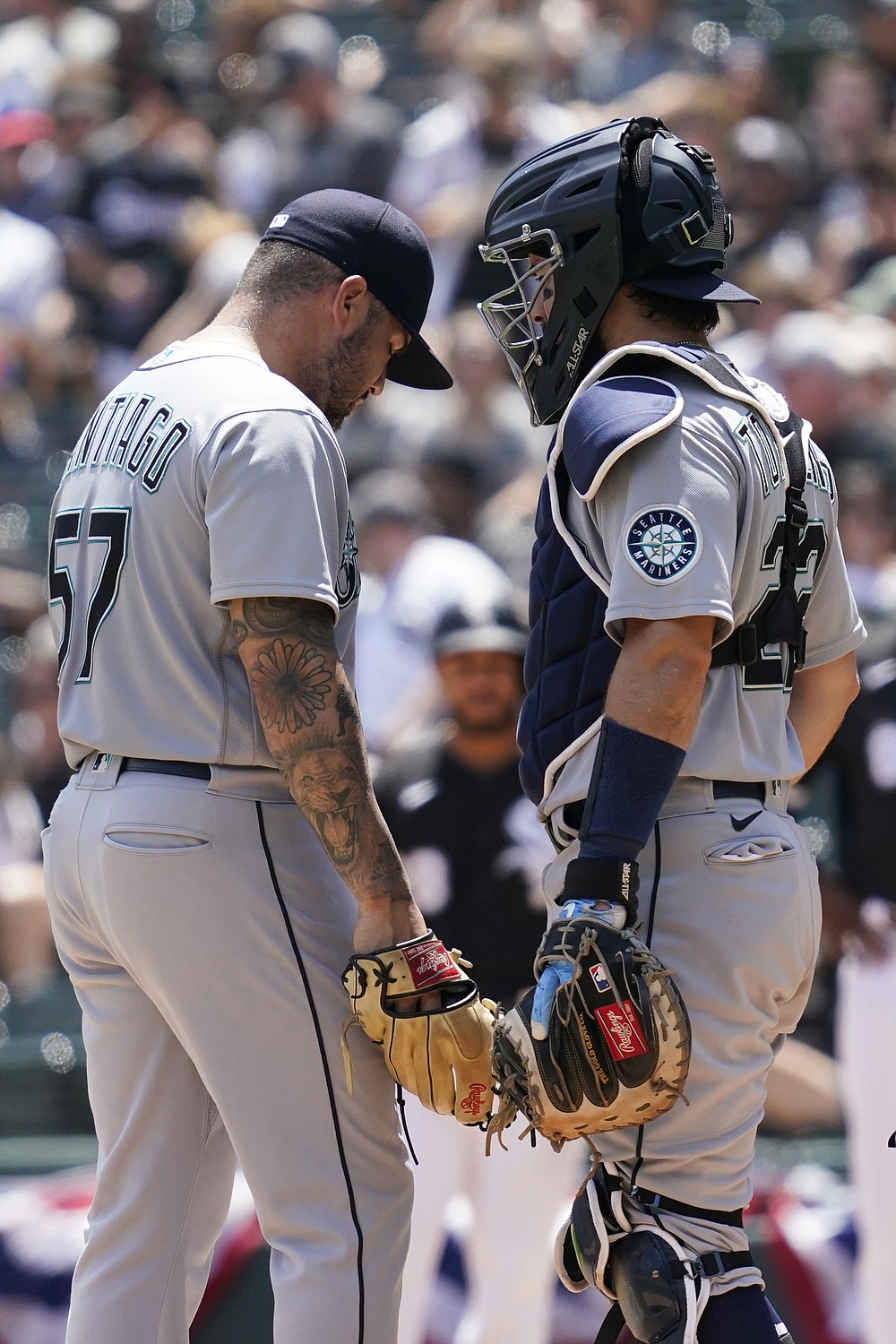