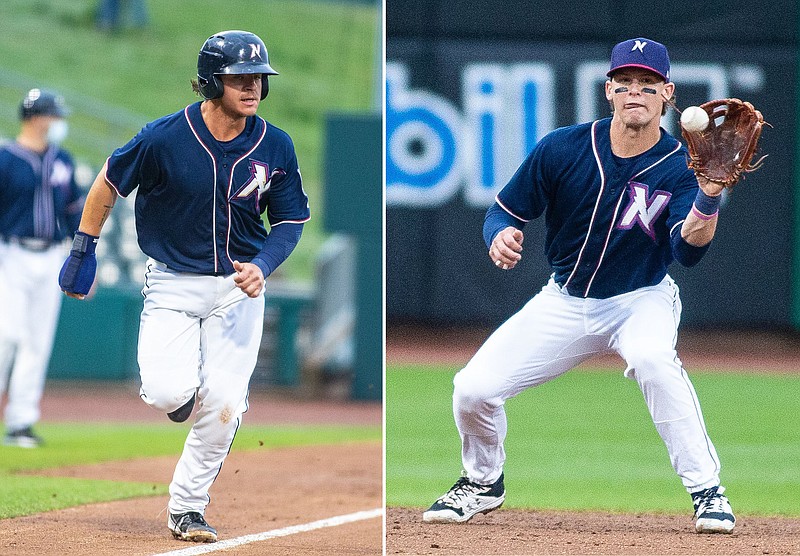 Nick Pratto (left) and Bobby Witt Jr., both with the Northwest Naturals were selected for the Futures Game. (Special to NWA Democrat-Gazette/ DAVID BEACH)

Witt Jr., 21, was the second overall pick in the 2019 Major League Baseball First-Year Player Draft by the Royals, while Pratto, 22, was the 14th overall choice in 2017. This is the first season for both players to be with the Naturals, the Double-A affiliate of the Kansas City Royals.

Witt Jr., a right-handed hitting shortstop who is in his first full seson of professional baseball, is fifth among Double-A Central players with 12 home runs and ranks second in total bases (102) and RBI (35), third in extra-base hits (22) and fourth in runs scored (31). He is batting .286 (50-for-179) with seven doubles and three triples.

The exhibition will be played on Sunday, July 11 at Coors Field as part of MLB All-Star Game festivities. The contest is scheduled for seven innings, beginning at 2 p.m. will be televised on MLB Network.

This will be the 22nd Futures Game, which began operating under the American League vs. National League format in 2019 after previously featuring a U.S. vs.World system. Major League Baseball, in conjunction with MLB Pipeline, Baseball America and the 30 Major League clubs, selected the 25 players on each team.